2013 was spent implementing the financial and organisational restructuring of Croatian Railways. The company was divided into three independent entities of which HŽ Cargo and HŽ Passenger Transportation are marketorientated transport operators whilst HŽ Infrastructure is the state-owned infrastructure manager. As a result, HŽ Infrastructure has seen major changes. 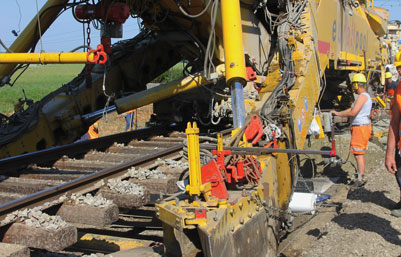 Works on the Okučani–Novska section

Natural productivity was increased through restructuring to 2.4 employees per kilometre of track in 2012 while at the end of 2013 it was approximately 1.94 which corresponds to EU standards. HŽ Infrastructure has been focused on intensive planning of the reconstruction of its lines and has set several major goals. Some of these goals include increasing track capacities by constructing second tracks along the most congested lines and increasing speeds (up to 160km/h on lines of international significance and 120km/h on regional lines and 80km/h on local lines). In order for these goals to be achieved, a maintenance and investment plan has been drawn-up with projections up to the end of 2016, with investments planned to the amount of €2.6 billion – of which €1.4 billion will be secured through EU funds.

The reasons for the need for such comprehensive works on the railway infrastructure are primarily due to the damages incurred during the War of Independence at the beginning of the 1990s and the occupation of a third of Croatian territory during which railway lines were damaged and destroyed. Also, in the period after the War, and in order to achieve traffic connectivity, the Croatian Government, in its transport strategy, placed emphasis on the construction of road infrastructure. By establishing a Railway Commission in 2012, the current government has changed its priorities and given advantage to the construction and development of railway infrastructure. Apart from providing its own funds, a major part of the financing will be secured from EU funds. This is reflected in the Transportation Operational Programme for 2007-2013 in which the government has included a whole series of investments in the railways which are to be financed using EU funds.

Railway construction, maintenance and modernisation projects on the territory of Croatia cover sections of two Pan-European Corridors: Corridor X (Salzburg–Thessaloniki) which passes through Slovenia, Croatia, Serbia and Macedonia and Corridor VB from Rijeka via Zagreb and Koprivnica to the State Border with Hungary and then on to Budapest. The latter line is part of the Rijeka traffic route (Rijeka–Zagreb–Koprivnica–State Border) forming a part of the Mediterranean Corridor of the integral Trans-European Transport Network (TEN-T).

In the scope of the modernisation of that traffic route, there are a number of major rehabilitation works underway. Thus, rehabilitation works are currently being carried out on the Moravice–Skrad section – 16.5km in length on the M 202 Zagreb–Rijeka line. Moravice and Brod Moravice stations will undergo reconstruction in the scope of these works, as well as the ‘Ličanka’ Bridge which, due to its limited bearing capacity, was a bottleneck on this important and international traffic route. By fortifying the structure, the bearing capacity and speeds on the bridge will be brought up to the standards of the line. After the completion of works in this difficult hilly terrain, the maximum speed will be 75km/h, with maximum allowed mass per axle at 22.5 t and 8.0 t/m. Up until the beginning of the rehabilitation, the speed limit was 50 km/h, which further slowed down traffic on the Rijeka line. The completion of works and the opening to traffic on the upgraded section is planned for 2014. In the scope of the project also planned are the screening of the track, installation of sand layer, replacement of tracks and the mounting of new turnouts at the Moravice and Brod Moravice stations, the construction of new platforms and the renewal of the station area, the reconstruction of drainage along the open line and at the stations, the adjustment of the signalling, interlocking, telecommunications and overhead line installations to civil works and the installation of new track and signalling equipment. In the scope of the works 45,000m of new rails, approximately 35,000 new wooden sleepers, approximately 50,000m³ of stone material and 22 new turnouts will be installed.

Also planned on the same traffic route are the reconstruction of the existing track and the construction of a second track on the Dugo Selo–Križevci line with works to the value of almost €200 million from August 2014 to July 2018. Numerous other works and activities are planned in the scope of this project, including:

The reconstruction of the existing track and the construction of the second track on the Dugo Selo–Križevci section will ensure maximum train speeds up to 160km/h, with an increase in corridor capacity, thus considerably shortening the journey time between Zagreb and Bjelovar, Koprivnica, Varaždin and Čakovec.

Also financed through the IPA Fund is the renewal and reconstruction of the Okučani–Novska section to the value of €35.85 million. Proceeds from the IPA Fund are used to finance 85% of the works while the remaining 15% is secured from the Croatian state budget. The Okučani–Novska section is on main line M105 Novska–Tovarnik–State Border, which forms a part of the aforementioned Pan-European Corridor X. The reconstruction consists of two parts: the modernisation of the Okučani–Novska station interspace (about 16.8km) and the reconstruction of Okučani station (about 3km).Works began in September 2012 and should be completed according to plan by the end of 2014.

In accordance with the requirements of interoperability as per EU directives for corridor lines, after modernisation is complete speeds will be up to 160km/h, with a design bearing capacity of 22.5 t per axle, that is, 8 t per metre. Also underway is the design of the upgrade and construction of the Dugo Selo–Novska section of Corridor X (first phase) to the estimated value of €90 million, while a competitive bid has been announced for the design of the upgrade and construction of the second track on the same line (second and third phases). Start of works on the upgrade and construction of the mentioned section is scheduled for February 2017, while completion of works is expected by the end of 2021. The estimated value of the works is €482.5 million.

The reconstruction and upgrade of the railway tracks on the Dugo Selo–Novska section require designing and execution of complex works on railway tracks to the length of 82km and solutions for a large number of intersections with roads.

Currently underway is the drawing-up of designs for works which are scheduled to start in 2015 and 2016 to be financed from the proceeds of EU Funds. These include:

The modernisation of the signalling, interlocking and telecommunications devices will ensure a higher safety level at intersections of rail and road. By increasing speeds, journey times will be shortened both for passengers and cargo, and with the installation of new supporting track structures the level and passenger safety and comfort will be improved. At the same time maintenance costs of the upgraded tracks will be decreased.

All projects and works are in the function of modernisation and rehabilitation in order to construct a high quality and functional railway infrastructure which corresponds to the parameters of European corridors and market requirements and which will improve railway traffic competitiveness, thus increasing the share of railway transport in the total scope of passenger and freight transportation.

Already underway is intensive work on developing projects for the upcoming budget period from 2014 to 2020 in order for projects to be prepared on time for application for financing from EU Funds. Due to the financial constraints and deficits in the state budget, the Croatian Government has established a strategy for the modernisation and development of the national railway infrastructure which for the most part is to be financed from the proceeds of EU Funds. In this way, the Croatian Government wishes to make use of all the money available to it from European funds in the forthcoming budget period.

Darko Peričić graduated from the Faculty of Transport and Traffic Sciences in Zagreb. He joined the railway in 1977 as Traffic Controller and later he worked as Rijeka Station Manager, Rail Incident Investigator and Driving Instructor. From 2003 to 2009, Darko was Director of the Rijeka Regional Office and from January 2012 Head Technologist in HŽ Infrastruktura. Since 12 March 2012, Darko has been President of the HŽ Infrastruktura Management Board.

By Darko Peričić, President of the Management Board, HŽ Infrastructure