Today, intercity travellers in Switzerland are faced with crowded trains on a daily basis, regular delays causing missed connections as well as traffic jams on the country’s main motorways – valuable time which is lost when commuting, particularly between the cities of Berne and Zurich, Lausanne and Geneva, as well as between Zurich and Winterthur. The principal reason for these problems with mobility in Switzerland is that there is a lack of sufficient capacity on the railway and motorway infrastructure between these cities – the most frequented in the country. Without innovative solutions, improvements can only be had through massive government investments in new transport infrastructure. For Global Railway Review, Niklaus König – President and CEO of SwissRapide AG reveals details of a new transportation idea for Switzerland – the SwissRapide Express®…

During the coming years, the demand for mobility in Switzerland is expected to increase further. As an example, the number of travellers on the SBB rail network has increased by an average of 5% p.a. between 2005 and 2012. Looking into the future, the SBB forecasts a growth of between 60-90% on the aforementioned lines by 2020.

The neighbouring countries of Germany, France and Italy already have had high-speed lines that have been in service for decades, successfully increasing the capacity and market share of intercity passenger traffic while reducing travel times between the major cities in their countries. With the classic model of government project financing and project implementation, a new high-speed line in Switzerland would take at least 20 years, and likely more, to implement. This puts the railway system at 40 years behind our neighbouring countries and would not provide a solution to today’s capacity problems before 2035.

It is for these reasons that the SwissRapide Express® project was launched – a vision for a new, innovative, ultra-speed railway system based on proven Maglev (magnetic levitation) technology implemented in Shanghai since 2004. Through its characteristics of having no contact with the guideway and no moving parts, the Maglev railway system has significant advantages over conventional high-speed railway technologies, including:

Thanks to the Maglev railway technology, the SwissRapide Express® is able to truly provide a next generation solution with fast and reliable services for intercity travellers in Switzerland. Journey times can be dramatically reduced – for example:

For future decades, the capacity of the system can be increased by over 100% with minimum investments by reducing the departure times to every three minutes and increasing the vehicle length from the currently planned six sections to 10 sections. Thanks to its environmentally-friendly characteristics and this potential to increase capacity based on the needs of the next generations, the SwissRapide Express® is truly a sustainable solution for the future of the country.

The long-term vision of SwissRapide AG is the construction of an east-west network north of the Alps from Geneva to St. Gallen, including connections to Basel and Lucerne. The current project planning foresees the commission of the first phase of the project (Zurich to Winterthur) by 2025.

Although the SwissRapide Express® Maglev railway vehicles look similar to conventional high-speed trains, the design and construction is in fact closer to the principles used in the airline industry.

The Maglev vehicles are levitated, driven and decelerated by the linear motor S-coils fastened on the underside on each side of the guideway. The linear motor is also used as a transformer to deliver electrical energy to the vehicles. While in motion, the vehicles have no contact with the guideway whatsoever and have no moving or rotating parts which is why they are able to achieve significantly higher operating speeds than conventional high-speed railway systems.

Thanks to the unique characteristics of the linear motor, the vehicles can accelerate linearly until their operating speed of up to 500km/h. This means, for example, that the SwissRapide vehicles can accelerate to 300km/h in just over 1 minute 30 seconds, compared to almost the 10 minutes typically required by a conventional high-speed train. This is also one of the reasons that a Maglev railway system has significantly short point-to-point connection times compared to a conventional system.

The magnet fields near the track at ground level are comparably low as for the passenger areas since they are contained to the linear motor under the guideway. In addition, since the block sections of the linear motor (approximately 800m) are only switched on seconds before the vehicle arrives and are turned off immediately after the vehicle passes a block section, no standing electro-smog is produced near to the guideway since there is no current flowing. Convention railway systems normally produce electro-smog 24/7 since the overhead lines are always under power.

Based on a study carried out by SwissRapide AG and a further partner company, approximately 10% of the yearly energy demands of the SwissRapide Express® can be covered by installing solar cells on the unused surface of the guideway. In addition, SwissRapide AG is planning to improve the aerodynamic design of the system, which could provide additional energy savings of up to 10%.

The SwissRapide Express® project is to be financed via the innovative Private Investment for Public Infrastructure (PI2) model, developed by SwissRapide AG and its partner companies. In contrast to the PPP (Public Private Partnership) concept, the PI2 financing model foresees that an infrastructure project is lead under the auspices of a private company and is 100% financed by a private equity/debt mix. The following are some of the key advantages of the PI2 financing model:

In order for the PI2 financing model to be successful in a project, the following framework conditions for the project are necessary:

Potential PI2 investors include the following:

The PI2 financing model is a new, innovative approach to infrastructure financing and is currently being considered for other public infrastructure projects around the world, such as for the construction of new airports as well as for rail links from airports to city centres.

The Maglev ultra-speed rail system is particularly suited to be financed via the PI2 model since the very low operating and maintenance costs can ensure a positive business case and guarantee the return on investments.

SwissRapide: the new generation of mobility

The SwissRapide Express® is a private pioneer initiative of SwissRapide AG and is supported by the member companies in the SwissRapide Consortium, who together also provide expertise for other potential Maglev railway projects worldwide.

Niklaus König is the President and CEO of SwissRapide AG as well as Project Director of SwissRapide Express®. Niklaus studied Theatre Arts at Mount Royal University in Calgary, electrical engineering at the University of British Columbia in Vancouver, and completed his Master’s Degree in Science at the Swiss Federal Institute of Technology in Zurich. His working experience includes Sony of Canada, Philips Switzerland and the Swiss Federal Office of Transport (BAV), where he was responsible for railway signalling, traffic management and telecommunication systems. In 1997, Niklaus joined the Swiss Federal Railways SBB in Zürich as Head of the Signalling Department. In 1999 he founded the European Euro-Interlocking Project under the auspices of the International Union of Railways (UIC), which he led successfully as Senior Project Manager until 2005. In 2006, Niklaus became Director and CEO of Swiss Railway Engineering SRE GmbH in Zürich and in the same year he initiated the SwissRapide Express® project. In 2008, he founded SwissRapide AG based in Zürich – a company dedicated to the promotion and management of the SwissRapide Express® project as well as to the planning and engineering of Maglev high-speed rail projects and technologies worldwide. 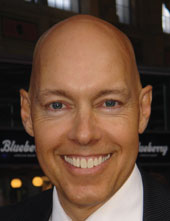 By Niklaus König – President and CEO of SwissRapide AG