Infrabel – the Belgian rail infrastructure manager – has been fully-engaged in testing the rail infrastructure for the Liefkenshoek Rail Link since spring 2014. Of critical importance in this are the ETCS and safety tests for the purpose of obtaining permission to officially open this new freight link in the Port of Antwerp in December 2014. For Global Railway Review, Luc Vansteenkiste – Director-General of Asset Management at Infrabel – discusses the latest initiatives in this strategic railway project. 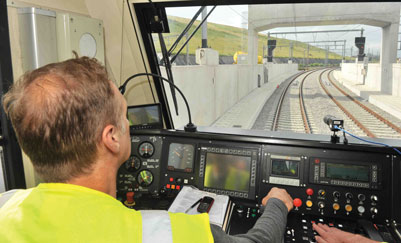 The Liefkenshoek Rail Link will improve the flow of traffic between the Waaslandhaven on the left bank (including the rail installations at Deurganckdok) and the Antwerp-North marshalling yard on the right bank. In addition, many freight trains will then no longer need to make a detour via bottlenecks (using the Kennedy rail tunnel and Antwerp-Berchem–Antwerp-Schijnpoort rail axis), but they will be able to use the direct and faster Liefkenshoek Rail Link. This new rail link is being realised by means of a Public-Private Partnership together with the private partner LOCORAIL NV (consisting of BAM PPP Investments Belgium, CFE NV and VINCI Concessions SA). The project will be responsible for supporting the growth of the Port of Antwerp and thus also for the economy, as well as being part of the strategy to optimise intermodality between rail and water (ports).

On 12 November 2008, LOCORAIL NV, with the support of the temporary building consortium THV LOCOBOUW (consisting of MBG, CEI-De Meyer, Vinci Construction Grands Projets and Wayss & Freytag Ingenieurbau), started – on behalf of Infrabel – on the engineering work over the 16.2km section of track. Undoubtedly the most spectacular undertaking was the boring of two tunnels under the Schelde river and the B1/B2 canal dock. All the engineering work on the track had been completed by the beginning of May 2014.

ETCS testing and inspections on the rail infrastructure

Infrabel also made use of its ETCS (European Train Control System) test train – the EM202 – for this. During the safety tests, the cameras and computers transmitted all the data (such as the operation of the ETCS, the track information, the speed up to a maximum of 90km/h, etc.) from the balises in the track to the driver’s cab in the train in order for these to be checked. At the same time the ergonomics of the train driver in the cab was tested for the purpose of optimising the driving conditions (such as avoiding any unnecessary application of the brakes along the track section).

During InnoTrans Berlin in September 2012, Infrabel presented its own ETCS test train – the EM202 – to the European public. EM202 was commissioned for use by Infrabel in 2012 and is the first actual train in Europe which has been specifically developed and equipped for ETCS (European Train Control System) testing. This train records and tests the European signalling system before and after it is installed on the Belgian rail network.

The train, measuring 20m-long, offers room for five people in the train cab and has a top speed of 120km/h. It runs on diesel and can be deployed across the entire Belgian rail network. This train was designed and built by the contractors Geismar (France) and Donelli (Italy). Furthermore, by the end of 2014, Infrabel will be commissioning a second ETCS test train.

ETCS on the Belgian rail network

The Liefkenshoek Rail Link had the ETCS signalling system installed when it was being built. This is an intrinsic part of Infrabel’s strategy to gradually install ETCS on the entire rail infrastructure. By the end of 2022, the entire Belgian network will be equipped with ETCS, making it one of the three safest networks in Europe.

Currently, 541km of track on the classic Belgian rail network has already been fitted with ETCS Level 11 and 140km of track on the high-speed network with ETCS level 1 and Level 22. Approximately 10.5% (681km of track) of the main track sections of the Belgian network (6,472km) currently has ETCS.

ETCS is currently already installed on the following railway lines: the high-speed lines between Liège and the German border and Antwerp and the Dutch border; the Brussels-Nord–Leuven line; the Diabolo rail link and the Schaerbeek–Mechelen line along the E19 motorway; as well as certain sections of track along the Antwerp–Basel–Lyon freight corridor 2.

Since 2009, Infrabel has also been gradually installing the automatic braking system TBL1+ on its rail infrastructure, which is fully compatible with ETCS (in terms of hardware). TBL1+ provides automatic braking whenever a train passes a red signal and whenever a train is travelling faster than 40km/h when approaching a red signal at a distance of 300m.

The various safety systems (including fire detection, access detection, cameras, a ventilation system and an automatic foam extinguishing system) were also extensively checked. Then, the integration of all of these technologies was also thoroughly tested using all kinds of scenario testing. All of these safety features will be continuously controlled and monitored from the control room at Antwerp-Central station.

To assist the emergency services, there are 14 evacuation shafts and 13 tunnel connections in total, as well as the necessary access routes. Together with the emergency services, Infrabel organises a large-scale safety drill in the railway tunnels to thoroughly test the respective levels of coordination, communication, the various safety systems and the evacuation options.

In autumn 2014, training journeys will also be organised for the various rail operators to allow them to familiarise themselves with the new rail infrastructure and for the purpose of commercial commissioning.

Authorisation for starting operations in December 2014

All these tests are strict requirements prior to permission being granted for the new rail infrastructure entering service. These tests will be carried-out by the Belgian Federal Government Rail Safety and Interoperability Service (DVIS), having been certified by the independent body Belgorail based on the safety dossier provided by Infrabel.

After this formal authorisation has been provided by DVIS, Infrabel will be able to make the Liefkenshoek Rail Link available to the railway operators. The new rail link between the left and right banks will then be able to enter into commercial service in December 2014.

Thanks, amongst other things, to the Liefkenshoek Rail Link, Infrabel can gradually increase the proportion of rail traffic (container traffic) in the Port of Antwerp from the current 10% to 15% by 2030. This once again underlines the strategic importance of the new freight link for railways and the Port of Antwerp.

By Luc Vansteenkiste – Director-General of Asset Management at Infrabel