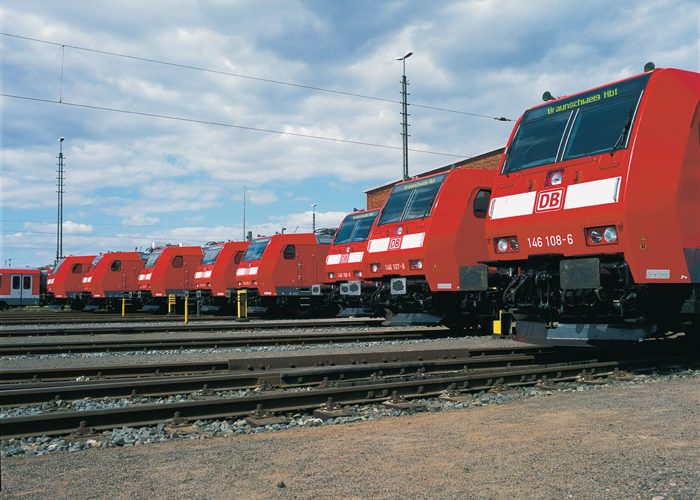 A locomotive bogie provides not only the function of carrying and guiding the vehicle, but it also enables the transmission of significant traction and braking forces. Depending on operational conditions and requirements, there are different technical, economic and operational constraints that were considered during the development of the latest generation of BOMBARDIER FLEXX Power bogies. Stefan Schrader – Product Manager, Business Unit Bogies at Bombardier Transportation, explains further.

Rail transport is characterised by strong competition with other modes of transportation. This leads to a strong cost pressure in terms of investment and life cycle costs (LCC), especially within the locomotive market which is dominated by freight traffic. In addition, the competition within the railway industry, consisting of long-established and new suppliers, is continuously increasing as well as customer and homologation requirements.

Increasing requirements on locomotives and bogies

Depending on the viewer’s perspective, there are differing product needs. The requirements for the bogie can be classified within the following three views with individual key aspects:

As a consequence from the sometimes divergent and individually weighted requirements, for example, the following goal conflicts may arise:

To resolve these conflicts, strategic and systematic methods are needed.

Facing the different views, product management plays an essential role in maintaining a commercially attractive, high quality, but lean product portfolio which fits to all relevant markets. Product management is responsible for technical performance and cost over the entire life cycle – from the bid and design phase, until the phasing out of the product.

Bombardier’s FLEXX bogies product portfolio is divided into different product platforms for the market segments ‘S’ (trams), ‘M’ (multiple units, coaches and metros), and ‘L’ (locomotives). A product platform includes a group of products with similarities in terms of requirements, functions and technologies. These groupings can contain various product options and variants.

Product management is part of the engineering and is appointed to maintain the product strategy and to promote the related development actions in cooperation with other functions. For this purpose, different tools for data management, market analysis and visualisation are applied, for example life cycle models, roadmaps and so-called Master EBOMs (Engineering Bill of Material) to calculate material costs.

The aim is to develop a comprehensive picture of the product, the competitive position and identify potential continuous or discrete improvements as a basis for strategic decisions to ensure a high level of customer satisfaction.

From revolution to evolution

The base concept and architecture of FLEXX Power bogies has been successfully applied for many years in two and three axle motor bogies and is characterised by the following main features:

The FLEXX Power concept has been continuously developed since the 1970s and was significantly characterised by its simplicity compared to previous complex motor bogie designs. The first bogie which was tested in Henschel’s diesel-electric locomotive prototype DE2500 was initially a revolution in terms of its simplicity. However, the subsequent period was marked by continuous improvement and adaptation to different operating conditions and requirements.

Numerous other test vehicles followed and formed the basis for the establishment of the so-called Flexifloat principle, later re-branded as the FLEXX Power bogie. Particularly notable applications include the high-speed power heads ICE2 1/2 and the passenger locomotives Class 101. These vehicles still form the backbone of high-speed traffic in Germany. Another typical example of an early application of the Flexifloat principle in a three-axle bogie was a series of diesel-electric CoCo locomotives for Egypt.

Since that time, FLEXX Power bogies have been running successfully throughout the world, used by a huge number of operators. The simplicity of the concept allows adaptation to the different boundary conditions, without requiring major changes of the concept.

During the course of development the FLEXX Power family was divided into subcategories characterised by design speed and drive concept. These are namely:

This subcategory contains all three-axle bogies and also includes the Iron Ore locomotives for LKAB in Sweden, which impresses with their high tractive force of up to 350kN per bogie. At present, Bombardier is developing narrow gauge bogies for the new locomotives Class 23E for Transnet Freight Rail, South Africa.

These are bogies with nose-suspended drive and FLEXX Power 200 bogies with hollow shaft drives are used for the BOMBARDIER1 TRAXX1 locomotive platform which is well-known in Germany as Class 185 and Class 146.

This categorises high-speed locomotives up to 250km/h equipped with fully suspended so-called IGA drive and is characterised by having a low unsprung mass. Latest examples are bogies for locomotives Class ALP1-45 DP for NJT, USA and AMT, Canada.

This describes the family for high-speed power heads up to 350km/h. The most recent examples are the new bogies for SRO power heads in Saudi Arabia, which are delivered as part of the expanding third-party business to Talgo in Spain.

Based on the service-proven TRAXX platform, Bombardier Transportation has developed the TRAXX AC3 as the latest generation of locomotives for cross-border passenger and freight transport in Europe. For these applications, further bogie developments were identified. The requirements were derived from the range of vehicle configurations, customer requirements, the prevailing standards and other requirements from a product management perspective. Vehicle weights up to 90 tonnes, tractive efforts greater than 300 kN and speeds up to 200km/h were considered.

Based on the resulting specification, the latest generation of FLEXX Power 140 and FLEXX Power 200 bogies (see Figure 2) was developed. As there was a clear objective to harmonise and standardise both families to the highest possible grade, these bogies were also named as FLEXX Power Universal during the design phase.

The existing design was initially analysed with regard to potential improvements by identification of proven components as well as evaluation of the most cost-intensive components. A special focus was given to the bogie frame. The synergies of both application variants were then investigated with the aim to increase the number of common parts as much as possible.

In addition to the aforementioned general features, the new standard gauge generation is further characterised as follows:

Whilst further developing the product family, important development goals could be implemented in parallel:

The percentage of identical parts between FLEXX Power 140 and FLEXX Power 200 has been significantly increased compared to former generation from 47% to 90% within the complete bogie and from 10% to 92% within the bogie frame. The remaining differences are all related to drive suspension.

Use of proven components

Both bogie variants have been proven in railway operations in Europe for many years. Therefore, where possible the proven components of these bogies have remained unchanged. For example; traction rod, wheelset guides, dampers and springs. This results in a beneficial advantage for the spare parts inventory.

The interfaces between bogie and its fittings and as well the interfaces to supplier components were also harmonised. The procurement of components can therefore be undertaken with more flexibility and with a reduction in single source restrictions.

Production Engineers and specialists were directly involved in the early development of the bogies. Thus, the requirements and previous manufacturing experiences could be taken into account to improve the manufacturability and cost efficiency of the product.

The maintenance interval for heavy overhaul was extended by 25%.

With the latest generation of FLEXX Power 140/200, Bombardier is well-equipped and prepared for the challenges of the coming years.

Stefan Schrader achieved his degree at University Hannover and started his career in 1995 at ABB Henschel in Kassel (Germany) in the field of mechanical engineering of locomotives. After transition of the company into Adtranz in 1996, Stefan joined the Bogie Design Team and worked as Designer and Project Engineer. The company was purchased by Bombardier Transportation in 2001. In 2005, Stefan became Site Chief Engineer, responsible for locomotive bogies. In 2007, he was appointed Product Manager for Locomotive Bogies for Bombardier Transportation, Business Unit Bogies.