The Spanish railway market is currently going through gradual liberalisation, and as a first step, the country will make part of its railway infrastructure open to competition. New private train operator ECO Rail is ready to enter this sector and has already carried out a European rail liberalisation study. Summarising some of the conclusions of the study for Global Railway Review is Manager for ECO Rail, Juan Antonio Cuesta Cañas… 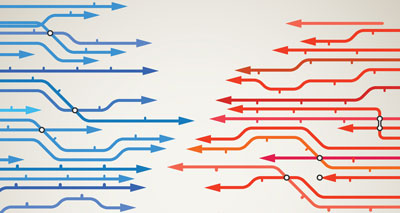 The, sometimes difficult, relationship between infrastructure and rolling stock has contributed to the emergence of companies that gain control over both lines and services and, therefore, full management of a country’s transport system. On the other hand, in many parts of the world, the highly strategic value of this infrastructure has caused these companies to be administrated by national governments. Europe was not the exception to this rule and almost every country has developed its own national railway society.

Breaking this trend in 1993 was the first railway regulatory implementation in Europe which took place in Great Britain, ordering a full separation between infrastructure management and service operation which split the British Rail company into privatised companies in different sectors including infrastructure maintenance, freight transport, passenger transport, and rolling stock leasing.

“…a distinction should be made between the provision of transport services and the operation of infrastructure. Given that situation, it is necessary for these two activities to be managed separately and to have separate account”1.

This forced a disaggregation between the operators and the infrastructure administrators in every EU country.

Nowadays, the biggest countries in Europe have also some of the biggest ‘public’ train companies in the world. For instance, the total number of employees of SNCF (France), DB (Germany) and Ferrovie dello Stato (Italy) is approximately 700,000, divided in this way:

On the other hand, many European countries have developed regulatory frameworks to allow private companies to transport passengers. In 2011, a study made by IBM Global Services and Kirchner C.7, compared the degree of opening of the different European railway frameworks in every country (see Figure 1 – regulatory changes within the last three years won’t be represented).

Sweden is the top liberalised system within Europe, with a full open model which, nowadays, has established a competition on the track for all the passenger services, both regional and interregional, either being profitable or non-profitable. This model has represented significant cost reductions and less need for subsidies (10-25% reduction8) even if the public operator, SJ AB, still manages almost 70% of the total share of passenger-kms.

Not every legal framework has the same capacity to drive the companies into the correct environment. In this regard, the different liberalisation frameworks established in Europe demonstrated that there are several decisive points with critical importance:

The most important decision that a government must take is whether the competition would be open to public operators whose presence could cause unbalanced competition. This situation is only avoidable with an extremely tight control of the economical accounts and strategies of the public operator. Unfortunately this control is almost impossible to achieve without the will of the operator to prioritise the efficient function of the sector over its own interests.

An important entry barrier for a new operator is the access to the capacity in conditions guaranteeing its chances to compete with the old incumbent operator. In order to avoid possible cases of preferential treatment in the adjudication of the capacity, it is critical for a vertical separation between the administrator of the infrastructure and the public operator.

In Europe this division has been carried out by the countries following very different schemes as shown in Figure 29.

Therefore, the highest annual bill would depend on political decisions which are far from the control of the operators, and that can vary from year-to-year. Moreover, in some countries, the decision of the specific value of the fee is a decision taken by the infrastructure administrator, which, in case of the non-existence of a strong vertical split between it and the public operator, can finish on an unbalanced situation for the private operators.

For a new operator, procuring rolling stock is of course a necessity, but an extremely expensive element. Among this costly financial situation, the long periods of manufacturing and the long periods of homologation (which together normally last from three to four years), also establish a big entrance barrier.

This problem can be fixed with the creation of rolling stock leasing companies which provide trains to the operators. In this sense it is capital to push on the interoperability of the different national railway systems and on the simplification of the homologation processes.

Europe is seeking a liberalised railway sector and the European Commission is pushing on this direction as it is assumed that the entry of private companies will improve the use of the highly expensive infrastructures constructed.

However, the European Union has not developed a common railway market. Instead every country has its own regulatory framework: Sweden has a fully liberalised sector; the UK is liberalised with franchising and an open market; Germany is liberalised only on the regional market; and Italy and Austria are open in the long-distance sector, etc.

This situation, together with the defence of its public railway companies that the different European countries are developing, is delaying the entrance of the new private operators in competition, even if the experience of the open market countries has been positive in the past.

Juan Antonio Cuesta Cañas is a Civil Engineer from the University of Cantabria (2003) and has a PhD from the University of Granada (2009). He has worked in the renewable energy sector and, since 2012, has managed the development of a new private railway operator, ECO Rail. ECO Rail got its Railway License and Safety Certification in 2013 and is currently pursuing the objective of starting operations on the Spanish market which is undergoing a liberalisation process.