Arriva’s Marco Piuri, Director Southern, Central and Eastern Europe, talks to Global Railway Review about a varied 30-year career within the transport sector, his role at Arriva, witnessing significant changes across the industry and looking to the future… 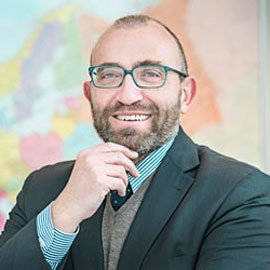 Arriva’s Marco Piuri, Director Southern, Central and Eastern Europe, talks to Global Railway Review about a varied 30-year career within the transport sector, his role at Arriva, witnessing significant changes across the industry and looking to the future. An experienced businessman, Marco Piuri is a key member of the executive board at European transport operator, Arriva.

Born in the thriving northern Italian city of Milan, the 55 year-old leads Arriva’s extensive group of bus and rail business in its Southern, Central and Eastern Europe region. It’s a role, on top of his Arriva board responsibilities, which takes in Spain, Portugal, his native Italy, and stretching into Eastern European countries covering Poland, the Czech Republic, Hungary, Slovakia, Croatia, Serbia and Slovenia – ten countries with ten very different cultures, stakeholders and economic challenges.

Piuri’s near 30-year path to a senior role within Europe’s transport sector has seen him hold roles in a wide variety of organisations since leaving Milan’s Cattolica University in the mid 1980s with a degree in Economics.

Very quickly he joined the Italian Chamber of Commerce in 1986, making a name for himself as an assist to chairman, Piero Bassetti. Soon after the Chamber, one of the world’s oldest business support organisations, appointed him to the role of president of EuroDesk, a special agency within the organisation.

2008 is when the call came from Arriva with Marco joining as managing director of Arriva Italia – a rapidly growing part of the business with bus operations across the north of the country.

Leading the development of Arriva, through both acquisitions and organic growth, Marco soon added operations in Spain and Portugal to his role by overseeing Arriva’s Iberian businesses. Marco oversaw the development of the region until April last year when he was appointed Director Southern, Central and Eastern Europe – adding Arriva’s sprawling businesses in countries including Hungary, the Czech Republic and Slovakia to his portfolio.

The latest and perhaps proudest moment in his career came later in 2014 when in September Arriva’s chief executive David Martin announced that Marco had been appointed to Arriva’s Group Executive Committee.

Marco says he owes a lot to the transport sector, the people around him and the teams he has helped develop, especially during his seven years with Arriva. He spoke exclusively to Katie Sadler from Global Railway Review.

“I am extremely honoured to have had a varied and successful career in the public transport and people mobility industry.” He said.

“I joined Arriva in 2008 and it was a hugely exciting time when the company was spreading its wings across mainland Europe – increasing our Italian presence, thriving in Portugal and entering the Hungarian and Slovakian bus markets.

“Of course, that was at a time when the global economy was stronger. It was in a different place. In the seven years since we have seen a tremendous amount of change – both at Arriva and across the whole transport sector.

“We are proud to be part of the DB Group and the efforts of our people have helped to cement us as a leading transport operator in 14 countries. I am delighted to have been part of that growth story – especially in Central and Eastern Europe where we are now the region’s largest international passenger transport operator.”

“I really believe that those who adapt will see the benefits in the years ahead. It’s up to transport operators to be different. To stand out.”

As an astute professional however, Marco has been quick to realise that the economic crisis has had an impact on the industry and it continues to feel the strain.

He continued: “It is fair to say that we remain in one of the deepest political and economic crisis’ of the last 50 years. We are in a changing world and I really believe that those who adapt will see the benefits in the years ahead. It’s up to transport operators to be different. To stand out.

“I firmly believe that the way we do things at Arriva is different. We do things the Arriva way and I see this more and more now that I am fortunate enough to be part of the Executive Committee. I can take a new view on the business.

“People often ask me what it means to do things the ‘Arriva way’ and to me it’s the feeling at Arriva where nothing is impossible. We continue to gain a competitive advantage by thinking differently, either through investing in innovative technologies, developing our customer offering or seeking opportunities in emerging markets.

“From day one we have continued to improve our knowledge, reliability and reputation showing that Arriva is indeed ‘different’. People respect us for that. They like how we don’t stand still.

“I think that approach has put us in a great position with passengers and client bodies as it shows we are match-fit for the challenges of the next 10 years.

“It’s a challenge I am thrilled to be part of and as the transport markets across Europe advance, we are constantly striving to be better and better. It’s an exciting journey now and certainly will be in the future.”