Preparing for the final stages: the New Line Copenhagen–Ringsted

With construction work on time and on budget, the Danish high-speed link between Copenhagen and Ringsted’s next challenge is to incorporate two major national programmes: the Electrification Programme and the Signalling Programme. For Global Railway Review, Banedanmark’s Project Director, Jan Schneider-Tilli, gives an update on Denmark’s first high-speed line, which is due to open in December 2018… 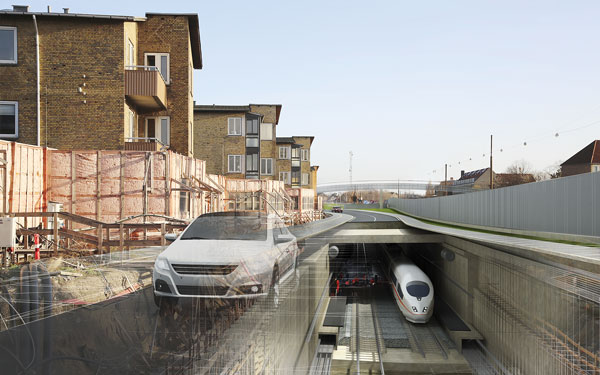 Construction of the new high-speed line from Copenhagen to Ringsted on Denmark’s main island, Sealand, is progressing well. Construction work began in the spring of 2013 on the earliest awarded contracts. Work has now been completed on some of the smaller contracts, for example on bridges and troughs, and they have already been handed over from the contractors to Banedanmark, a state-owned enterprise responsible for maintaining and developing Danish railway infrastructure.

A key consideration of Banedanmark’s tender strategy for the Copenhagen–Ringsted project was to split the construction of the 60km-long railway into smaller contracts called Tender Packages. Thus, the construction of the new dual-track high-speed line is carried out by several contractors, mainly Joint Ventures comprising Danish companies, which complement each other’s strengths. In fact, contractors are currently working on seven different Tender Packages ranging from 750m up to 23km. According to the project’s execution schedule, all construction and earth works will be carried out by early-2017. We are currently on track and are confident that there will be no serious delays.

No matter the type of contract, the relationship between client and contractor is essential. The client organisation only absorbs a minor part of the total ‘cost-pie’ and, by far, most costs are spent in civil works and constructions. Cooperation is therefore key to success in budget and execution schedules.

The high-speed line will head out of Copenhagen from the borough of Valby. The New Line Copenhagen–Ringsted’s official starting point is Ny Ellebjerg Station, some 4km from Copenhagen’s Central Station. Shortly after Ny Ellebjerg Station it will enter into the first of two cut ‘n’ cover tunnels, Kulbanetunnellen, which was completed in the autumn of 2015. The second tunnel, Hvidovretunnellen, will be completed in late-2016. The stretch out of Copenhagen is the most densely-populated area along the new railway and it was therefore decided to construct the tunnels in order to reduce noise impact. The area above Kulbanetunnellen was previously a park and most of the space above the 750m-long tunnel will be re-established as a public park in co-operation with the Copenhagen Municipality.

Using an existing infrastructure corridor, the new railway will run closely to three national motorways: Holbæk Motorvejen, Køge Bugt Motorvejen and Vestmotorvejen, crossing the motorway network five times – four of which will be through tunnels under the motorway. The latter and most spectacular motorway crossing is a 512m-long steel bridge crossing one of the biggest motorway junctions in Denmark, Vallensbækgrenen, south west of Copenhagen.

The bridge across the Vallensbæk motorway junction will be completed in autumn 2016. Work on foundations and pillars began in late-2014 and during the spring of 2015 the bridge’s spans were prefabricated in Poland under strict supervision; shipped to the port of Korsør on Western Sealand and then transported nearly 100km on the motorway to the construction site. The steel elements, some of them up to 39m in length, were then lifted into place above the motorway in several operations during the summer of 2015, forcing total closure of the southbound motorway during one weekend and then closure of the northbound motorway during a weekend one month later. The closures of the southbound and northbound motorway were executed to perfection in cooperation with the Danish Road Directory and the Police. The new railway bridge is now towering approximately 10m above the motorway junction and future passengers will get a great view of the landscape from both sides of the train.

During the construction of a railway tunnel beneath Holbækmotorvejen, Banedanmark established an 800m-long temporary motorway in Brøndby curving out of the normal motorway. In so doing the construction period of the railway tunnel was reduced by nearly one year. The 800m-long temporary stretch with six lanes was in service for a period of 14 months, enabling Banedanmark’s contractor to work undisturbed in the area of the temporary closed motorway.

Banedanmark plan to build a new station in an area situated north of Køge, approximately 40km southeast of Copenhagen. It will be known as Køge Nord Station and will become a strategic hub for commuters from the Køge Area to Copenhagen. Here, passengers can transfer from the existing local train line (S-tog) to the New Line Copenhagen–Ringsted and to the local railway, Lille Syd-banen to Køge and Næstved. The two railways’ platforms are separated by an eight-lane motorway.

The station is an important element in an over-all policy of promoting railway transport in Denmark and will make it possible for all passengers to change from one mode of transport to another (train, car and bus).

In May 2014, Banedanmark, Køge Municipality and DSB (the Danish national rail operator) jointly invited entries for an international restricted competition for the design of the new station in Køge. The winner was announced as a team consisting of Danish architect firms COBE and DISSING+WEITLING with COWI as consultants.

The station’s design claimed international recognition by being nominated as one of four projects in the ‘Best Futura Project’ category in the 2015 edition of the MIPIM Awards in Cannes, France.

Five prequalified contractors are competing for the ‘build to order’ contract for Køge Nord Station and we expect to award the contract before summer 2016.

In order to operate a high-speed railway, strong sleepers are required. A new type of sleeper labelled S-16 has been developed and is being produced at Banedanmark’s Sleeper Plant in Jutland. A total of 180,000 sleepers are required for the New Line Copenhagen–Ringsted. During the autumn of 2015 the Sleeper Plant had to be readjusted for the production of the new sleepers and is currently producing the new high-speed sleeper only. The production of the high-speed sleepers is expected to continue for the remainder of 2016. Other client deliveries are 23 points approved for speeds up to 250km/h and 130,000 m3 of ballast.

Since 2012 Copenhagen–Ringsted’s CAD group and colleagues in our sister project, the Ringsted–Fehmarn Line, have identified requirements for working with 3D models and delivery of traceable and buildable projects. Using these experiences, the requirements are adjusted for use in further projects for Banedanmark. Based on the experiences so far, a company CAD manual was released in October 2015 marking the first step in implementing usage of BIM (Building Information Modelling) in design and construction as well as BIM for FM (Facility Management) in operation and maintenance.

Moving towards BIM is being defined and planned through Banedanmark’s strategic project ‘Fremtidens Digitale Jernbane/The Digital Railway of the Future (DIGI)’ with key members from the Copenhagen–Ringsted project.

At this stage work to incorporate Banedanmark’s two major programmes, the Electrification Programme and the Signalling Programme, into the New Line is high on the agenda. Copenhagen–Ringsted will be the first line in Denmark, equipped with signalling and catenary/power supply for 250km/h. Interface meetings with the two programmes are held on a regular basis in order to adjust and coordinate time schedules. These programmes are crucial for the completion of the New Line, so a lot of effort is made to avoid any disappointment.

In the Danish Parliament there is broad support to invest in and upgrade the railway network. The New Line Copenhagen–Ringsted is the first stage in reducing travel times between the biggest cities in Denmark. Several other projects, among them three new lines, currently carry out EIA-procedures, enabling political decision later in 2016 or in 2017. As Denmark has traditionally been a ‘diesel train country’, continuous electrification of main lines and the most important regional lines is foreseen over the next 10 years. Furthermore, all signalling will be substituted with ERTMS technology by the beginning of the 2020s. Elsewhere, plans to connect Denmark and Germany through the Fehmarn tunnel are continuing, leaving the investment in Danish railway infrastructure at a high level.

It is the first time in over 30 years that a railway to this scale has been constructed. With future railway projects on the horizon, the knowledge gained over the course of the Copenhagen–Ringsted project could be of benefit for others. The best testimony for attracting new projects is to deliver this new line on time, by 9 December 2018. Our experience with elaborating and dealing with turnkey contracts, the use of 3D modelling, budget management, as well as dealing with various stakeholders, will put us in the frame for future railway projects.

Jan Schneider-Tilli has worked within the railway field for 25 years, with around 20 years in project management. He has been employed as Project Engineer for the Øresund Bridge, Great Belt Bridge and the Metro in the 1990s and as Project Manager on Ringbanen, S-tog to Roskilde (not executed), the KØR project and the New Line Copenhagen–Ringsted. Jan worked at DSB from 1992 to 1995, Carl Bro (Sweco) between 1995 and 1996, Banestyrelsen/Trafikstyrelsen between 1997 and 2009, and Femern A/S from 2009 to 2010. Jan has worked on the New Line Copenhagen–Ringsted project at Banedanmark since 2010 and since March 2016 has been the Signalling Programme Director.