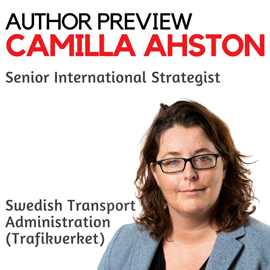 In order to raise the level of competition in the Swedish Transport Administration’s procurements, we are endeavouring, among other things, to attract tenders from a larger number of international suppliers for each project. More tenders will provide the prerequisites for innovative methods, and a higher level of productivity. More international tenders will mean, in turn, greater challenges when it comes to other languages, safety and regulations.

Since 2011, The Swedish Transport Administration, have been trying to encourage new international suppliers to submit tenders for its construction projects. These efforts are now beginning to produce results.

There are already a large number of international suppliers who are well established in Sweden with Swedish offices and Swedish personnel. The goal for The Swedish Transport Administration now is to attract even more foreign companies to the Swedish and Nordic markets.

“We want to increase competition. With more competition we can acquire new ideas and innovative methods from all tenderers, including the Swedish ones, and this will increase our productivity” says Camilla Ahston who is responsible for coordination The Swedish Transport Administration’s work with attracting more foreign companies.

The Swedish Transport Administration is working systematically to lower the market entry barriers for the Swedish market. Some examples include:

So far, our efforts have for the most part been focused on contractors, but they also means that more consultants are also becoming more interested. The larger contracting companies are often most interested in large, complex projects, preferably in large city areas. However, there are exceptions.

There are, of course, challenges associated with the work on attracting more foreign suppliers.

Swedish regulations in the civil engineering sector are not the same as in Europe. Minimum pay rates, cultural differences and hierarchically directed organisations are other challenges.

Camilla Ahston has a Master of Law degree from the University of Lund and specialises in public procurement. Camilla is a Senior International Strategist at the Swedish Transport Administration (Trafikverket) and is responsible for the work of attracting more foreign companies to Trafikverket. This work includes publishing a newsletter to foreign suppliers, conducting seminars in Sweden and abroad to meet with suppliers, attendance at tender meetings, conducting an international supplier’s day, meeting with other clients, and generally investigating what market entry barriers foreign suppliers are faced with when trying to enter the Swedish market.