Posted: 10 May 2017 | Michael Rönnefjäll (Infrastructure Manager - Jernhusen) | No comments yet

Jernhusen owns, develops and manages properties, stations, depots and other buildings attached to the railway network in Sweden. But the government-run organisation is about much more than buildings. Jernhusen aims to make it easier to use public transport and to transport goods by rail. It also focusses on creating new life in station areas so that more people can live, work and make easy use of public transport. Global Railway Review interviewed Michael Rönnefjäll, Jernhusen’s Infrastructure Manager, to find out more. 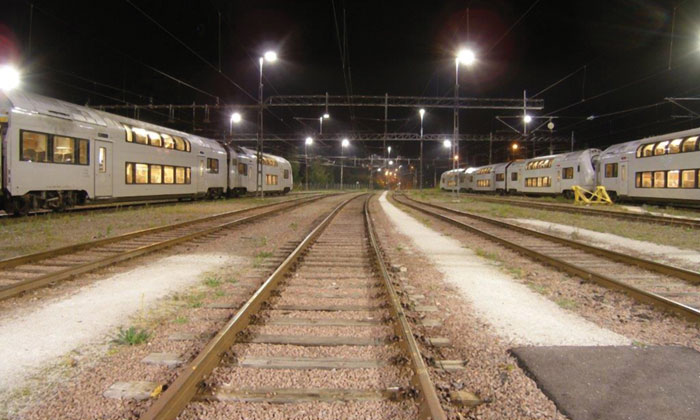 Since its inception in 2001, Jernhusen has invested over 12 billion SEK in projects both large and small to improve infrastructure. Today, Jernhusen has approximately 180 employees and is owned by the Swedish state.

At around the same time, lighting specialist Tivalux launched a new product on the Swedish market from Holophane for rail yard and platform lighting called DSX D-Series and Jernhusen invested in these products to change the lighting in their Västerås marshalling yard.

In general, the lighting in Sweden’s marshalling yards is somewhat archaic with most installations being in the region of 20-30 years old. The fittings are all by different manufacturers and feature a variety of streetlight and floodlight models. The most common lights are 250W high-pressure sodium – with yellow/orange light.

Michael Rönnefjäll is Infrastructure Manager and a long-standing employee of Jernhusen with extensive experience in installations in the rail environment. Having announced the company’s decision to replace their conventional discharge lighting with modern LED technology, Michael explained that they would make their selection after testing four different lighting units.

“Before the old lighting was replaced there were 38 conventional luminaires and five LED fixtures; and some of these LED luminaires had already stopped working. Power-wise, the yard utilised approximately 11,000W,” explained Michael.

The requirements for the new facility and the fixtures were as follows:

The fixtures were also required to be available in two variants: one for pole installation and another for wall-mounting.

To ensure the right choice was made, data was compiled from the various prospective suppliers, but in the end choice fell on the D-Series LED fitting from Holophane, with its factory location in Milton Keynes (UK) and its distributor Tivalux AB. Its long history, plus good delivery times and a commitment guarantee were all winning factors when the final selection was made to provide the new LED lighting.

“The procurement of the plant in Västerås was with a view to it being the ‘pilot plant’ to test the new technology,” explained Michael. “Installation of the new LED lighting took place during the summer of 2014 and we expected energy savings to be in the region of 50%.”

Michael continued: “The main reason for switching to the new LED lighting was that the existing fixtures had become old and worn.”

The depot in question – the Västerås marshalling yard – is just one of the 48 that Michael manages and covers an area of approximately 500 x 80 metres. This is typical of the size of a marshalling yard that Jernhusen own, although they vary, of course; their main yard being in Tapiola.

“Myself and our tenants were completely satisfied with the results of the installation,” said Michael. “What I appreciate most is the smoothness (uniformity) and the fine quality of the light, as well as the reduction in energy consumption. The rapid delivery times were a bonus too.”

In terms of the reactions from clients and staff, there have also only been positive comments. “Some have said that the lights feel almost like daylight,” explained Michael.

When asked for his thoughts regarding Trafikverket’s interest in the lighting, and the fact that they have already begun to install them, Michael responded: “I think it’s funny, because in my opinion this fixture provides considerably better light than the LED fixture that Trafikverket used before.”

When undergoing any such installation of this type, not only is the quality and performance of the product vital to a successful outcome, but the reliability and helpfulness of the supplier is of paramount importance. If communication fails or the necessary support is not given when needed, it can negatively affect the result of the project.

On this point, Michael was keen to highlight his satisfaction with the performance of both: “We are completely satisfied with both Holophane and Tivalux. Deliveries have been fast and on-schedule and the quality of the products has been good. What I see as the next step is to follow up and ensure that the operating times will last. We’ve also had great help from Tivalux in developing good lighting calculations in our marshalling yards.”

Jernhusen, despite being owned by the Swedish state, funds all its costs through business/rental income leaving the surplus to the owner. This differs from the way in which Trafikverket operates, in that the Swedish Transport Agency utilises money direct from the state to fund its works.

So, what are the ongoing plans for the business and what does the future hold? “We are currently in the process of making plans for several additional yards over the course of the next five years,” explains Michael. “Tapiola – our main yard – is undergoing work in several different stages. I can also confirm that Borlänge, Gävle, Luleå and Notviken will be up and running soon.

In appreciation of the energy savings they have made because of the new lighting installation, some companies have considered the option of controlling the time and place of lighting remotely, to further reduce energy consumption. However, although this is something that Jernhusen have looked at, they remain fixed on ensuring their tenants have full illumination available at all times. Michael said: “Vandalism of trains and carriages can be an unfortunate reality for clients, and so far, we have avoided such solutions.”