Posted: 14 July 2017 | Isabelle Fonverne (Projects Officer of Safety and Interoperability at the UIC) | No comments yet

Now in its ninth year, The International Level Crossing Awareness Day emphases the importance of safety at level crossings. Global Railway Review sat down with Isabelle Fonverne, Projects Officer of Safety and Interoperability at the IUC and some other attendees of the event to discuss this important topic… 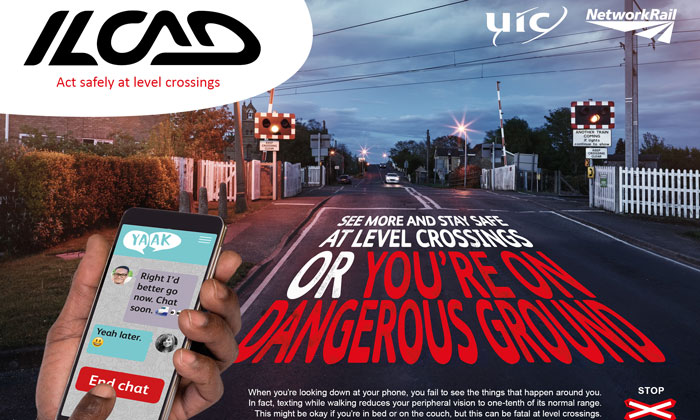 The Railway Association of Canada (RAC) and the International Union of Railways (UIC), co-hosted this year’s International Level Crossing Awareness Day (ILCAD) on 2 June 2017, in Montreal. This conference attracted railway industry representatives, road authorities, academics, and many others from around the world who are working to raise awareness about the dangers surrounding level crossings.

The international conference launched the annual worldwide level crossing safety campaign and over 40 countries participated in this global event, either by relaying it on their websites or on social media, or by organising a range of activities around ILCAD.

Michael Bourque, President and Chief Executive Officer of the Railway Association of Canada (RAC) said: “Nothing is more important to railways than safety. Canada’s railway industry believes that rail safety is a shared responsibility. Crossing incidents affect everyone: train crews and first responders, their families, communities and more. Investments on infrastructure will bring more connectivity-productivity-safety.

“Crossing and proximity issues are the top opportunity areas for rail-related public safety improvements and Canada’s railways have invested more than $24 billion in infrastructure since 1999 to maintain a safe and efficient network. Our industry’s sustainability depends on being able to grow safely and in harmony with the communities that we go through.”

The conference itself was an opportunity to exchange ideas on behaviour; distraction; enforcement; regulations; trespassing and suicide prevention; engineering; innovative solutions; and education/awareness/community outreach.

“Nothing is more important to us than ensuring that our passengers arrive safely at their destination and that all our VIA Rail colleagues safely return home to their families and loved ones at the end of the day. We are always striving to improve in this area,” Yves Desjardins-Siciliano, President and Chief Executive Officer VIA Rail Canada and Chairman of UIC North America Region (NARA) added. “In 2016, VIA Rail invested $71.9 million in safety and efficiency, including capital investments in the fleet, equipment and major infrastructure projects.

“We have continued to embed our safety culture through ongoing investments in safety training and on-the-job peer review and rules compliance observations. Last year, we reported a 42% reduction in the number of train incidents compared to 2015 as a result of our strengthened safety culture. We must continue our engagement with communities with the primary focus on increasing safety awareness and educating the public on the importance of prevention…”

Renato Mazzoncini, Chairman of UIC and CEO of Italian Railways (FS) continued: “The DNA of the UIC, since its origins [is] to make the transport offer more reliable, to make it more and more ‘seamless’ thanks in particular to interoperability, while bringing all its technical expertise in order to globally improve advantages of this mode of transport, connected to others. This includes the smart management of the interfaces between different modes of transport, and all the work that has been going on for years with the road sector on crossings.”

“Human factors are the main cause of road collisions,” Jean-Pierre Loubinoux, Director General of UIC concluded. “This year, the theme of ILCAD concerned the possible negative effects of distraction. The ILCAD 2017 motto was: ‘Make it safer together!’, this is addressed to everyone, even though special attention was focused on young people this year.

“Within UIC, we have been involved in these issues in a global way and at various levels for many years. UIC is proud to have initiated the creation of a group of experts in 2014 on the topic of level crossings with the United Nations. Important work has also been carried out with the IRU on this theme (three flyers for truck drivers, buses and taxis are available in 12 languages on our websites).

“Finally, very recently, UIC was selected by the European Commission to coordinate the SAFER-LC (Level Crossings) project www.SAFER-LC.eu , which emphasises the exchange of information and data between the rail and road systems so that everyone can manage the disturbances or difficulties coming from the other. In France, the road killed 3,500 people in 2016, 25,500 in the EU in 2016. Meanwhile, 31 people in France in 2016 (according to SNCF) and 296 in the EU in 2015 were killed at grade crossings.”

Next year is the 10th edition of ILCAD, with the launch conference likely taking place in Zagreb, Croatia, during the first week of June (tbd).