For European Railway Review, ÖBB-Infrastruktur’s Ludwig Koschutnig, Safety Expert, and Günter Dinhobl, Member of the R&D Unit, provide details of the projects, awareness campaigns, and research programmes that are helping to improve safety at level crossings in Austria. 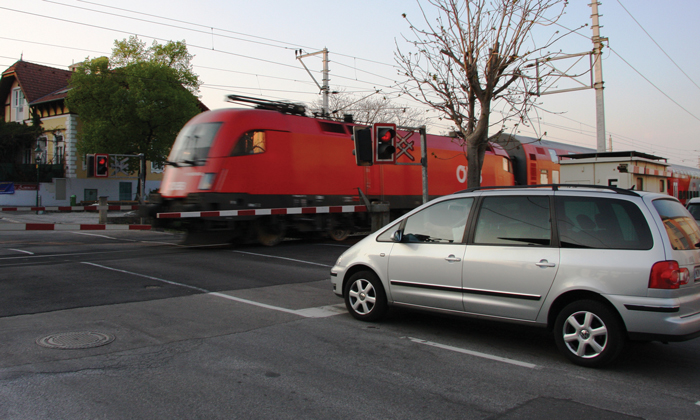 A small insight into our history

In 1960 ÖBB’s infrastructure network contained 10,703 level crossings. After this time there followed a continuous decrease in this number but a simultaneous increase in the number of road vehicles: from 758,000 in 1960 to 3,149,000 in 1980 and finally 7,290,000 vehicles in 2016 – so 961% more than in 1960. The big challenge for all infrastructure managers is to deal with this large number of road vehicles and their drivers in connection with an increasing number of trains.

The number of level crossings declined from 10,703 to just 3,278 (69% less) in the same time period (this reduction includes the transmission of some secondary lines to the provinces).

Since that time there was very slow improvement until a new programme was introduced in 2010 to improve safety on level crossings. Its focus was on the following: 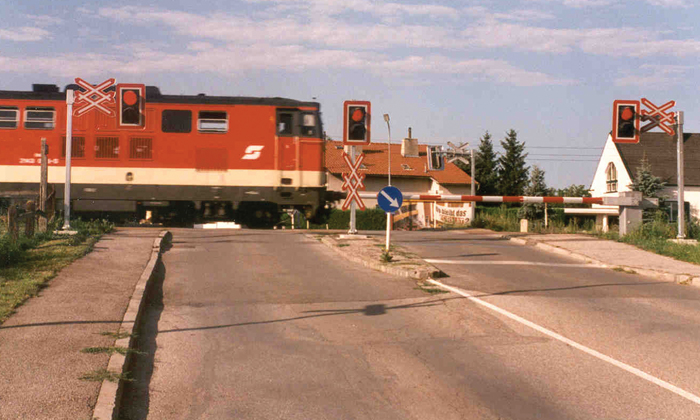 There are currently 1,593 active level crossings in Austria

Gaining greater awareness is a very important issue: approximately 70% of all level crossing accidents occur within a distance of approximately 10km of a car driver’s home. Drivers often assume that they know their local level crossing and the timings of train crossings – but while this is plausible in theory, it is a different matter in practice.

We organise educational sessions in schools for children aged between 13 and 15. By doing so we can reach children before they attain their motorbike driver licence at the age of 16, and their car driving licence when they turn 18. These sessions focus on the risks present on railway premises and especially safety at level crossings. We reach around 500 schools with 30,000 children per year.

We also carry out ‘information days’ for owners and teachers at driving schools. We explain the rail system; the main differences between road and rail dynamics, and the most important topics concerning the function of a level crossing and safe behaviour when dealing with them.

Corresponding with ILCAD (the International Level Crossing Awareness Day) every year we have an awareness campaign for greater safety at level crossings. With posters, promotion tours at stations and movies we increase awareness of the risks posed by level crossings. Our last three movies focussed on the following subjects:

Reduction of the number of level crossings

From 2010 to 2016 we continued to reduce the number of level crossings; on average by around 119 level crossings per year. However, the reduction in such numbers becomes increasingly difficult. Some of them must remain because private users have the right to cross the track at this point. In other cases it is a question of the community – nobody wants to lose their local level crossing. Oftentimes, however, there is an agreement to pool nearby level crossings. 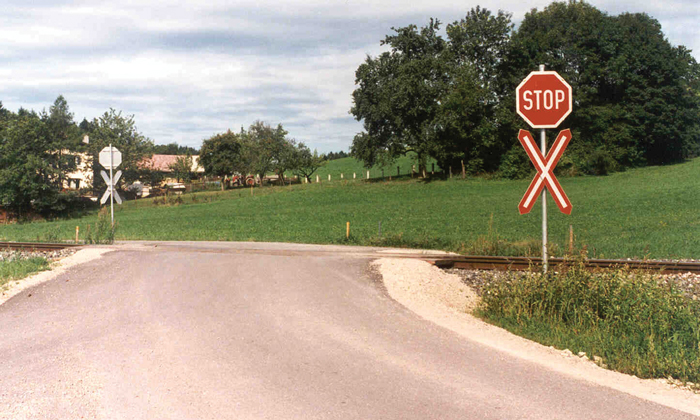 There are currently 1,685 passive level crossings in Austria

In addition, several level crossing safety research projects have been carried out within the last decade – in essence, with the aim of learning about behaviour at intersections of road and rail. At first, numerous level crossings in Austria were analysed using the ViewPointSystem; a tool to visualise the driver’s perspective of driving on roads with level crossings. The outcome was to draw attention to the so-called ‘portal effect’ and to emphasise the portal area.

Two investigations on ‘acceptance of red lights’ (at level crossings) were carried out with computer-based testing of around 80-100 people. The first test was dedicated to the question of how long, on average, it took to acknowledge the red light and draw to a stop in front of level crossings. The second tested the average time taken to pass the level crossings against the rules. The results showed that the average duration depended largely upon the kind of protection measure present: light, half, or full barrier. The second test included the existence of policing the violation to stop at red lights, and the outcome underlined the usefulness of this measure. It was demonstrated that the actual consequences of the penalty are more important than just the announcement of such a measure. Additionally, a group with a high potential of violation was identified as ‘male’, aged between ‘18 and 29 years’ and having held their driving licence for ‘less than five years’. 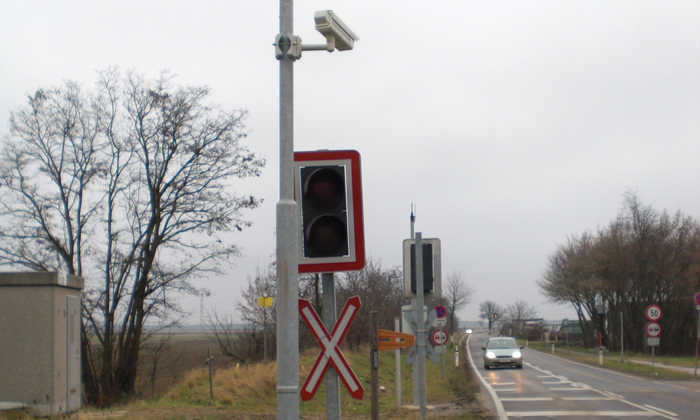 ÖBB-Infrasruktur are working to equip approximately 400 active level crossings with ‘red light radar’ technology. The equipment will record details of a driver who ignores a right light and they will be punished.

These surveys were followed by a summary named ‘MANEUVER’ which was established by the ‘Kuratorium für Verkehrssicherheit’ (KfV). The aim was to identify measures that would enhance safety at level crossings based on an analysis of misbehaviour. Expert and user groups identified 18 measures in the areas of policing and monitoring, road-related infrastructure, increased awareness, and education including further training. The description of these measures includes feasibility, expectations of helping to reduce misbehaviour, and also a rough estimation of the expense1.

As a result of MANEUVER, ‘crossways vibration lines’ – a low-cost measure on the roads approaching level crossings – was tested and systematically evaluated by the Czech CDV. Two level crossings – one with light signals and a half barrier, and another equipped with a St. Andreas-Cross and a Stop-Sign – were chosen for this evaluation and testing. The outcome of this research project ‘RÜTTLEX’ was quite surprising: while within MANEUVER this measure was recommended for all level crossing types, the evaluation indicated that this measure had no effect at the tested type of active level crossing. However, very good results were shown at the passive level crossing: the reduction in road speed was 5-12km/h even one year after installation and obedience to stop at the road-side Stop-Sign raised significantly – both shortly after, and one year after installation2.

Currently, further suggestions of MANEUVER are being realised: to improve the road driver’s licence training, a project run by preventconsult, dedicated to improving driver knowledge by means of an extended version of the driver’s licence exam, is being carried out with 3,000 test persons. The test can be found online3 and the results will be available in mid-2017. Finally, a research project named SESAM (carried out by FACTUM) aims to set a standard that evaluates the impact of any (additional) measures to enhance safety at (existing) level crossings and shall be used to demonstrate the benefit of upcoming, new and innovative measures. The results will be available in 2018. 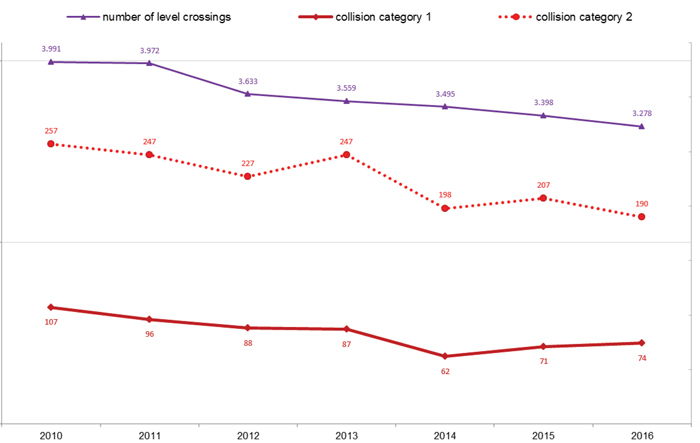 Level crossings and accident statistics between 2010 and 2016 in Austria

This effort is necessary in order to improve safety at level crossings. However, we also need a reciprocal agreement from the public and support from politicians in a common European way. It must be easier to cease a level crossing, even in the case of a private right. And the penalties for unsafe and risky behaviour at level crossings should be much higher than now. I am convinced that withdrawal of the individual’s driving licence and a penalty payment well above the €1,000 limit will help to stop violations. Human behaviour is not always understandable; human factors of behaviour and misbehaviour must be identified more precisely through systematic research projects to enable new and/or innovative solutions to enhance correct behaviour at level crossings. Yet one message remains valid throughout the generations: ‘only a non-existent level crossing is a good level crossing!’

Ludwig Koschutnig is educated in trade and business. He has been an employee of ÖBB since 1986 with the following responsibilities: track maintenance, cargo service, passenger service, signaller, trainer for personal skills, and safety expert. Since 2009 he has held the role of Safety Expert in the operational headquarter of ÖBB-Infrastructure responsible for Safety Management System, human factor tasks and accident/incident analysis.

Dr. Günter Dinhobl is educated in mechanical engineering, physics and history. Since 2006 he has worked in the Research and Development Unit of ÖBB-Infrastruktur AG. His areas of research include railway noise; level crossing safety; and railway track/switches.