The Gotthard Base Tunnel in Switzerland is one of the most imposing structures ever built in the history of rail traffic – at 57km-long, it is the longest railway tunnel in the world and will be officially inaugurated in June 2016. Global player for rails and turnouts, voestalpine, has been a key supplier for this project. 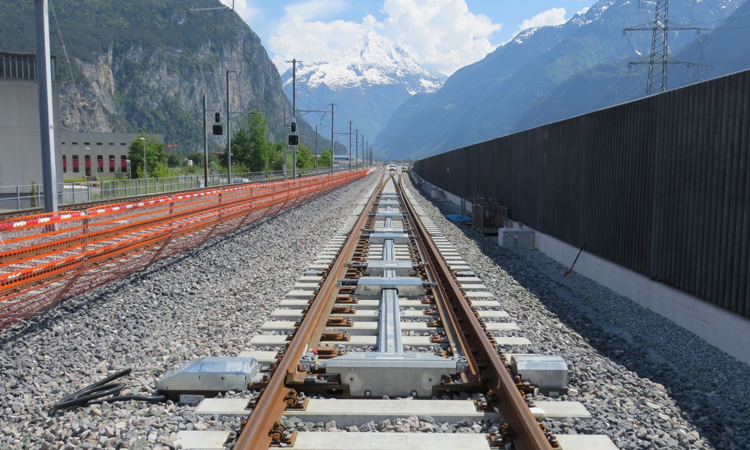 The Gotthard Base Tunnel is at the heart of the construction project of the New Rail Link through the Alps. Copyright: voestalpine

Construction of AlpTransit, or the New Rail Link through the Alps (NRLA) as it is also known, will create a fast and efficient transit route. At its heart is the Gotthard Base Tunnel which is not only the longest, but also the deepest rail tunnel with a rock overburden of up to 2,000m.

The CHF 12 billion project is an extremely challenging and complex one from an engineering point-of-view. The new line will be characterised by an enormous frequency of up to 250 trains a day and by the fact that it combines high-speed passenger operation with heavy-loaded freight transportation. Considering the environmental conditions in the tunnel (such as ambient temperatures of up to 40°C and humidity as high as 70%) this altogether constitutes the ultimate challenge for mixed traffic tracks. Due to the expectable strong modal shift from road to rail, the Gotthard Base Tunnel also brings a crucial benefit in ecological terms.

It almost goes without saying that only the best materials and services had a chance to be selected on this construction project. Therefore each of the two single-track tunnel tubes is equipped with 120m ultra-long rails from voestalpine Schienen GmbH and high-speed turnouts from its sister company, voestalpine VAE GmbH. A special test train has already successfully operated along the finished tracks at speeds of up to 275km/h (10% above the design-speed). Other test runs are to be carried out with extra-long freight trains powered by three locomotives. The total number of test runs will be around 3,500 cycles before the tunnel is handed over to the Swiss Federal Railways (SBB).

On the whole, the project developed and materialised extremely successfully along a precise multi-year schedule, starting with the delivery of the provisional tracks by voestalpine that were used during the construction phase only. Installation of the railway systems took place entirely through the two portals in the north and south. Because of the limited amount of space available, materials were transported into the tunnel on temporary construction-site rails. Also, a total of 28 million tonnes of excavated rock was transported out of the tunnel.

The next step was the supply of roughly 18,000 tonnes of rails and 43 turnouts which was accompanied by a service package including comprehensive engineering work, qualification tests, documentations and trainings. voestalpine experts not only had the demanding task to intensively accompany and facilitate installation, but they were also entrusted with carrying out special track work on-site themselves. Not surprisingly the turnouts feature top-notch technology – the HYDROSTAR® – a technologically advanced combined point operating, locking and detection system, as well as the IE 2010 (internal end position detector). 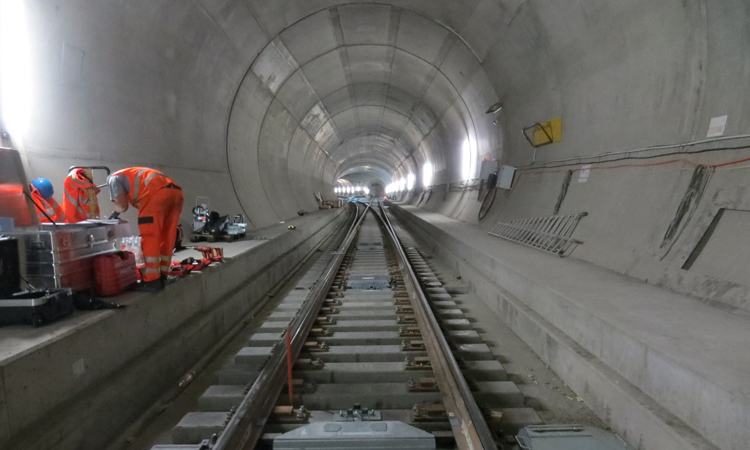 Although without any doubt constituting a highly prestigious lighthouse project, this is only one of voestalpine’s many achievements in the tunnelling business.

In 2013, voestalpine won the contract to supply the new rails for the Channel Tunnel – the 50km-long underwater section between France and Great Britain. In this project as well, intensive intra-group cooperation was called for to secure maximum customer benefit. The work involved the rail producer voestalpine Schienen GmbH, and the rail centre voestalpine Railpro BV in the Netherlands plus voestalpine France. While the rails were rolled in the Austrian high-tech mill, the Dutch took care of the welding and coating (a special service to counteract corrosion) and supplied the rail strings by long welded rail trains to the destination including unloading.

In Switzerland, the voestalpine Group’s ‘track record’ of excellence includes, for example, the Lötschberg Base Tunnel (opened in 2006 and having a length of almost 35km). Both the rail and turnout business units look forward to also supplying for the Ceneri Base Tunnel which is more than 15km-long.

Journey times between Zürich and Milan will be cut from 4 hours to 3h30 when the Gotthard opens, and to 3 hours when the Ceneri Base Tunnel opens in 2020. The aim is to manage train traffic down to intervals of just 3 minutes on this environmentally-friendly route through the Alps.

It is no surprise that voestalpine also has eyes on other projects such as the Brenner Base Tunnel which will be the main element of the high performance railway from Munich to Verona and will connect North and South Europe much more efficiently than it is possible today: even longer than the Gotthard, the construction project will be a pioneering work of engineering to markedly improve passenger travel and freight transport through the heart of Europe.

In a nutshell, all this confirms once again that operational track availability is of paramount importance when it comes to high performance (defined as the combination of substantially extended service-life and drastically reduced maintenance interventions, of course without compromising on other factors such as safety). In this connection, voestalpine also fully welcomes the European-wide implementation of the so-called ‘MEAT’ principle (the ‘most economically advantageous tender’ as required by the applicable EU Commission Directive on Public Procurement). Accordingly, all public contract awards are to take place on the basis of a lifecycle cost analysis and may also take into account other criteria such as CSR (corporate social responsibility).