Working together against metal theft

Although national security remains the sole responsibility of each Member State, and the competence of the European Union regarding police cooperation is very limited, ‘Justice and Home Affairs’ has been one of the fastest growing policy areas of the European Union for the last two decades. Especially after 9/11 the Member States have intensified their activities. They focused on the protection, preparedness and consequence management of terrorism and other security related risks, and developed comprehensive security requirements in the aviation and in the maritime transport system. In the 2011 Transport White Paper, the European Commission emphasised that the EU should also ‘find an appropriate European approach to land transport security in those areas where EU action has an added value’. 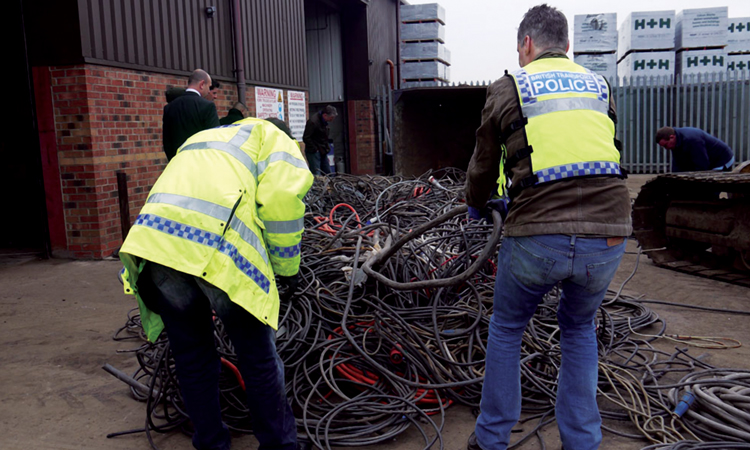 CER – the Community of European Railway and Infrastructure Companies – being in favour of sharing best practices and intelligence across Europe, supported the establishment of the ‘Expert Group’ and hence became its active member. In CER’s opinion, international coordination and cooperation between and amongst security authorities, police forces and transport operators, plays a key role in transport security and should be intensified and extended. Nonetheless, CER does not believe that new and additional security requirements resulting in legislative measures in those areas would generate any added value for the transport sector as a whole. Consequently CER objects to such measures. Eventually, CER, together with other railway and public transport members’ associations, inter alia, COLPOFER, UIC and UITP, suggested to the Commission to address other security issues that would be much more relevant to the transport sector – such as metal theft and vandalism.

After examination of all the potential areas, taking into account the views of the Member States, and that of stakeholders, the Commission proposed five main issues, above all metal theft, that would be discussed within the ‘Expert Group’ in the years 2013-2014. CER very much welcomed this initiative as its members and their customers have been seriously affected by metal theft for decades, and emphasised that a common action at EU level and sharing of best practices was necessary.

Metal theft on the railway

Metal theft, considered as an organised cross-border crime in Europe, has had a significant impact on the daily lives of people and railway businesses in Europe, and has already been a problem for decades. The number of metal theft incidents has been increasing across Europe, also due to the growing global metal demand and consequently increasing prices of metals. The major target of metal theft is copper. According to the World Bank Commodity Price Data the annual price of copper rose from approximately 1,560 US dollar per tonne in 2002 to approximately 8,000 in 2012. Other factors that, unfortunately, contribute to metal theft, are the availability of and accessibility to metals, the simplicity of metal sales, the low risks and penalties, and many others.

In the railway sector, the criminals are particularly targeting the signalling and power cables that are essential for the functioning and the efficiency of the rail services. Metal thefts, occurring every single day across Europe, lead to delay or even the cancellation of thousands of trains which in turn affects millions of passengers and freight customers.

Unless action is taken, European citizens and businesses will continue to be affected by metal theft. Furthermore, the economic cost of metal theft crime is very high thus the inaction is just not an option. Due to the cross border and cross sectorial dimension of metal theft, as metal theft affects also other vital infrastructure services, such as energy and telecommunication sector, a common action at EU level is needed.

There are number of areas where policy could be developed at the EU level and where the EU institutions and agencies, as well as different stakeholders, could work better together to reduce metal theft in the future. The wheel does not need to be reinvented and the already existing European practices, strategies and approaches shall be acknowledged.

It is the responsibility of each Member State as well as of the railway sector businesses to put in place measures in order to protect their critical infrastructures that are essential to the functioning of the society and economy. In order to make one of the most environmentally-friendly modes of transport, rail, even more sustainable and attractive, the aim is to increase the overall quality of the services offered. Rail passengers and freight customers expect railway services to be functional, reliable, safe and secure. Metal theft crime undermines the ability of the railway to be a sustainable transport mode, the development of railway businesses, and the trust of passengers and freight customers in railway services.

An adequate level of protection of railways must therefore be ensured in order to limit the occurrence of metal theft. Rail transport, as an open access transport mode, cannot be protected entirely from all potential threats. The rail networks are too large to fence or guard and any immense and fundamental modification of the rail system would involve enormous structural and financial requirements. All CER members are facing the problem of metal theft and try to find the best solution on how to protect their businesses and their customers, e.g. replacing copper for other less expensive metals where possible (note: copper is a good conductor of electricity thus irreplaceable from railway power cables), protecting metals as much as possible, installing CCTV systems, and others. Though, this is obviously not enough.

There is a need that the Member States, the EU institutions, and private sector get more involved, work more closely together, and play an active role in tackling metal theft, thus ensuring the continuity of critical infrastructure, railway services, on which European citizens are dependent. Moreover, the European institutions as well as the Member States have the possibility to draw-up and implement policies to improve measures for the protection of citizens and for the protection, security preparedness and resilience of critical infrastructure.

The Member States, together with the Commission, should consider establishing common definitions and sanctions for metal theft crime. In some Member States the offenders, in form of organised but also opportunistic thieves, are punished only based on the value of the stolen metals. The real impact it has on the rail businesses, their customers and the whole society – costs of replacement, maintenance services, service disruption (train delays or cancelations), customer reimbursement for the disruption, customer dissatisfaction, damage of company’s reputation and loss of revenue – is not taken into account. All of these aspects should be considered when giving penalties to the offenders. The fear of receiving a more severe legal punishment could prevent some of the offenders to commit this kind of crime.

Besides, the fact that the national security remains the sole responsibility of each Member State, the EU institutions have the possibility to establish police cooperation involving all the different levels of government bodies, especially the law enforcements, and assist the Member States in fighting organised crime more effectively through prevention, detection and investigation of criminal offences.

The financial attractiveness and the simplicity of metal sales is the driving force behind metal theft crime. In most of the cases, the stolen metal is being sold to scrap metal dealers, where the offenders receive their reward (usually in cash). As a consequence, it is important to use a multi-sectorial approach authorising only those scrap metal dealers that are running their businesses according to the national rules, thus can be seen as trusted and reliable partners. The Member States should consider to take actions ensuring that scrap metal dealers are properly licensed, operating to high standards, and are altogether an asset to the economy of the area, by implementing, inter alia, the following rules – cash-less payment, verification of supplier’s identity, record keeping, and immediate notification of any offer of illegal metals.

Only when cooperation and coordinated action between the railway sector is established can the reliable scrap metal dealers and law enforcement authorities at the EU level be successful in tackling metal theft efficiently.

Libor Lochman has been the Executive Director of CER since 1 January 2012. Libor graduated at the Transport University of Zilina and has a doctorate in electronics from the West-Bohemian University of Plzen. He has a strong background in Control-Command and signalling systems. Prior to his role as CER Deputy Executive Director and Leader of Technical Affairs (2007-2011), Libor acted as Director of the Railway Test Centre – a facility for testing European rolling stock, infrastructure and signalling components in Prague (2000-2005). Libor joined the Editorial Board of European Railway Review in January 2013.

Alena Havlova has been CER Security Policy Adviser since 1 March 2013. Alena holds a Master’s degree in Political Science from the University of Vienna and a Master’s degree in European Interdisciplinary Studies from the College of Europe (Natolin Campus, Poland). Prior to joining CER, Alena completed a traineeship at the Land and Maritime Security Unit at the European Commission’s DG MOVE. Prior to that, she gained valuable experience through work, inter alia, at the Permanent Representation of the Czech Republic in Vienna.