Following a surge of investment to carry out rail-related projects in Slovenia, Matjaž Kranjc, Director of the country’s rail infrastructure manager, SŽ-Infrastruktura, gives an overview of several important current and future projects that will modernise the Slovenian rail network and ensure it can facilitate growth volumes and keep rail competitive with other transport modes. 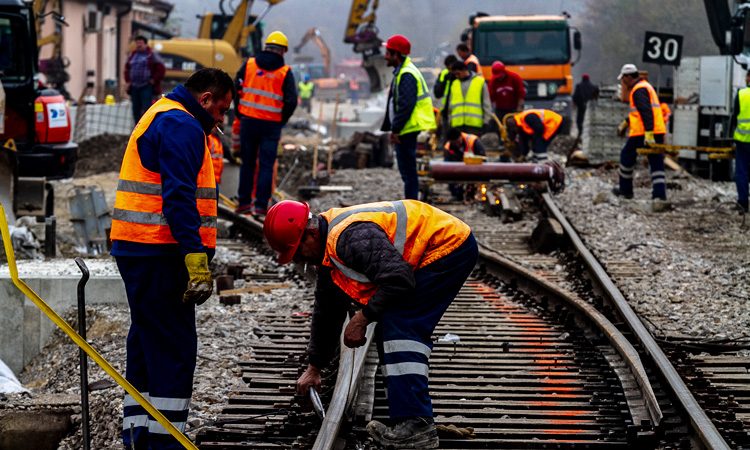 In the past few years, several large-scale infrastructure projects have been carried out on Slovenian rail network to increase line capacity and axle loads and to apply European corridor standards. Despite leading to considerable train service disruptions, such work is essential in order to facilitate development of the rail network. SŽ-Infrastruktura is mainly tasked with maintaining optimal conditions for the supply of rail services, which involves minimising disruptions, incidents and accidents on the one hand and maximising track availability and access to service facilities on the other. This is vital to achieving a modal shift from road to rail, which is one of the main targets set by railways in Europe. Current infrastructure plans at SŽ and the government suggest a number of important improvements can be expected in the next 10 years with respect to journey times, train reliability and punctuality.

In the future, another RFC known as Alpine–Western Balkan (RFC 10) will cross Slovenia as it connects Austria with the Bulgarian–Turkey border.
The infrastructure upgrades and improvements in Slovenia ultimately aim to build a network that is efficient, interoperable, safe and low-emission in order to build a modern network that is able to facilitate growth in transport volumes and keep rail competitive with other transport modes. Rail development in Slovenia follows the targets laid down by EU Regulations 913/2010 and 1315/2013 concerning a European rail network for competitive freight and the development of the trans-European transport network, respectively.

There has been surge in Slovenian rail infrastructure investment over recent years, with the annual budget for rail-related investment set between €200–300 million per year. Together with the Slovenian Infrastructure Agency (which owns Slovenian public rail infrastructure and provides state funding), SŽ have recently completed a number of important projects including the network-wide GSM-R roll-out, the installation of ETCS on most Slovenian segments of the core network corridors, and the renewal of several network sections.

A total of 16 infrastructure projects – six major and 10 minor projects – are currently on-going on the Slovenian network, with their contract value totalling several hundred million Euros.

Upgrades to link east Slovenia with Austria and Hungary

The largest project at present is to upgrade the line category from C3 to D4 on the Slovenian segment of RFC 5 and RFC 6 (Zidani Most–Šentilj-state border), which links east Slovenia with Austria and Hungary. The engineering work involves upgrading several track sections and stations, constructing station platforms and grade separations, closing level crossings, erecting noise barrier walls, and upgrading the signalling and telecoms equipment, with as many as 400 laborers and several hundred machines working on-site every day. Once the project is completed, the line will be able to accommodate axle loads of 22.5 tonnes, which translates to more trains per day and an annual capacity increase of four million tonnes, while also reducing journey times in rail freight by several hours.

There is a project underway to modernise the line and station at Pragersko, an important junction situated at the intersection of the Baltic–Adriatic and the Mediterranean Corridor. The work will comprise upgrading the line to D4 category, upgrading the tracks and lineside equipment, and installing noise barriers to prevent the negative impacts of rail on the environment. The project aims to link the Pragersko junction with the associated line between Pragersko and Ormož, which connects to Hungary and was modernised some years ago in an earlier phase of this project. The modernisation of the line was a priority with respect to establishing a competitive rail connection with eastern parts of Europe.

Double-track project between Divača and Koper

One of the most strategically important infrastructure upgrades in Slovenia is the project to double the track between Divača and Koper, which links the port of Koper with the rest of Slovenia and other inland countries and serves as a vital logistics connection between North Adriatic and central and west Europe. With more than 100 freight runs per day and plans for additional volume increases, the current single-track line averages a capacity utilisation of over 100 per cent under the UIC capacity calculation method, which makes doubling the track an imperative.

Site preparation started in March 2019, with the engineering work officially launched two months later. The project is expected to cost approximately €1 billion and is due to be completed in 2025. The second track will largely boost the capacity and axle loads of this vital rail line and bring significant improvements in terms of rail safety.

Projects of note which were recently completed include the construction of stop-off points at the largest junction in Ljubljana to improve mobility and an upgrade of the line between Grosuplje and Kočevje to offer fast and efficient public transport link between Slovenia’s capital and the country’s central and southern regions.

Projects in the pipeline

Furthermore, there are a number of large-scale projects in the pipeline to upgrade rail infrastructure in Slovenia, such as renewal of the Karawanks Tunnel between Slovenia and Austria, the modernisation of the mainline between Kranj and Jesenice (which connects the capital with the regions in the north-west), construction of over 200 at-station bicycle parking facilities across the country, upgrading several sections of the Ljubljana–Sežana line running westwards to the port of Koper and Italy, and the aforementioned double-track project between Divača and Koper.

Safety in rail exhibits an upward trend in both Slovenia and Europe. Modernisation of infrastructure and rolling stock works towards gradually reducing the impact of human error in planning and managing rail traffic operations – compliance with TSI standards and regulations ensures safe operation of lineside equipment and train-borne systems on the one hand while offering maximum safety to road users and rail passengers on the other. To eliminate risks, projects to upgrade stations, stop-off points and lines typically replace level crossings with grade separations and install automated barriers on crossings marked by a Saint Andrews Cross, which notably reduces the rate of accidents. Moreover, safety was significantly improved following the installation of GSM-R, with additional enhancements expected once ETCS is fully rolled-out.

Plans at SŽ-Infrastruktura for the next five years are focused on optimising business processes and updating the IT system. At the state level, most infrastructure projects of strategical importance will be focused on renewing and modernising mainlines and building new connections. Given the volume of planned engineering work, the Slovenian section of the pan-European core network will be turning into a large-scale construction site in the next few years to modernise the network infrastructure with the latest standards and notably improve the services offered by the infrastructure manager.

In the past four years, SŽ-Infrastruktura has secured reliable state funding to finance its activities, reduced the number of incidents and accidents, improved line availability and facilitated – despite several difficulties and service disruptions – a boost in rail freight volumes.

The main infrastructure goals at an EU level are focused on meeting the targets relating to core RFCs on the pan-European rail network. The rules governing corridor structures are expected to soon be harmonised so as to create a uniform core network, which will boost rail development in Europe and continue promoting the modal shift from road to rail for even more sustainability and reduction of impacts on the environment.

Matjaž Kranjc has been the Director of SŽ-Infrastruktura since 2014. He completed his academic studies as a specialist in transport studies and has a bachelor’s degree in transport technology. Matjaž started out on his career at Slovenske železnice (SŽ), where he first served on a key post in rail operations. In 2007 he was appointed Station Manager of the Traffic Control Station at Zidani Most and was later promoted to Head of the Traffic Planning Department. In 2012 he took up the position of Assistant Manager of SŽ-Infrastruktura. Matjaž makes regular appearances at international rail infrastructure conferences, is a member of various high- profile rail organisations and the Chairman of the internationally acclaimed Tina Rožanc Rail Association of Culture.