For our next Women Inspiring Rail instalment, Regional Transportation Authority Executive Director, Leanne Redden, tells us about her work to encourage investment into public transport through co-operation with other transit agencies to create an advocacy campaign. 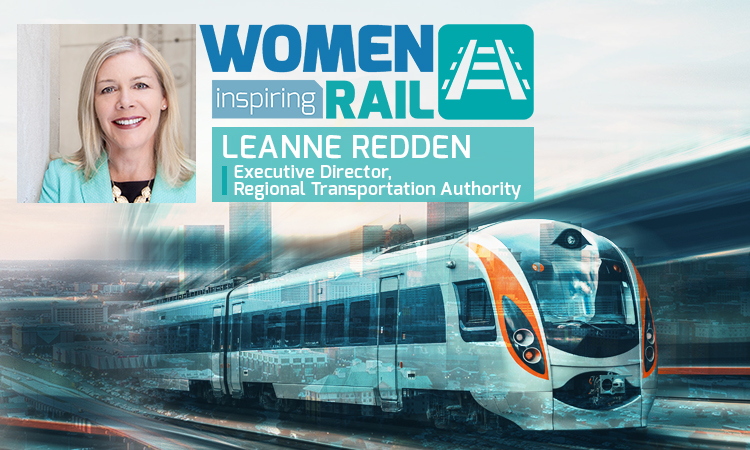 Before being named the Regional Transportation Authority (RTA) Executive Director in 2014, I oversaw the RTA’s planning and regional programmes for eight years. I had previously served as Chief of Planning for the Illinois Tollway and, prior to that, as Director of Transportation for the Village of Schaumburg, Illinois.

My job heavily involves working with the other Transit Agencies in our region. Our collaboration ranges from securing funding for public transport, to discussing the best ways we can maximise our investments. It’s not only important that we sufficiently fund our transit system to operate at a high level, but also to make sure we’re spending that money wisely and are good stewards of taxpayer dollars.

With a system as historic, large, and diverse as ours, we certainly face some challenges.

The most challenging and most rewarding are basically different sides of the same coin. Each Transit Agency has its own unique challenges and needs based on the operation they run.

The CTA provides rail and bus services in Chicago and the nearby suburbs. Its rail line is partially elevated and is called the ’L’. Metra provides commuter rail service between Chicago and the suburbs. It operates one of the largest and most complex rail systems in North America – more lines of track radiate in more directions from Chicago than from any other city in the United States. Pace is the suburban bus service that provides paratransit service for riders who are unable to take “fixed route” service. One of the largest bus services in North America, Pace covers an area about 15 times the size of Chicago.

Sixty-five per cent of the nearly 13 million people who live in the State of Illinois live in our region. We have had some form of public transport in our area for more than 100 years, and it is integral to our economy and the lives of our residents. With a system as historic, large, and diverse as ours, we certainly face some challenges.

Like many transit systems throughout our country, we deal with very limited funding resources. The RTA must balance the competing needs, politics and interests of our region’s three transit operators. But overcoming those challenges through thoughtful collaboration is what makes the work very rewarding. We all understand the importance of public transport in our region and the benefits it brings to our communities. Providing solutions with my transit partners that advance the entire region – although difficult at times – is very rewarding in the end.

In our region, the average resident can save $12,000 annually by switching their daily commute from driving to taking public transport.

Public transport can be the key to solving issues facing our region and, even more so, throughout the world. Simply put, investing in public transport benefits the economy and the environment.

In our region, the average resident can save $12,000 annually by switching their daily commute from driving to taking public transport. When more people choose transit, their travel costs are lowered, and funds are freed for housing, entertainment, and other living expenses.

The benefits of public transport go far beyond what’s happening in our region and benefit Americans even if they don’t use it: (1) Public transport saves more than four billion gallons of gasoline, reducing U.S. customer costs by $10 billion annually; (2) 37 million metric tonnes of carbon dioxide emissions are avoided by taking public transit; (3) One person with a 20-mile round trip commute can reduce daily carbon emissions by 4,800 pounds per year by using public transit.

Here’s an interesting statistic: If Metra – our commuter rail agency – stopped running their trains, we would need an estimated additional 27 lanes to our already crowded highways. Without good public transport, people would spend more time in traffic, increasing the pollution of the environment and eventually become more stressed. What makes me passionate is public transport’s vast potential for solving some of our world’s biggest issues.

There was a time when the RTA and the Transit Agencies did not get along. It was a tumultuous period where people fought each other for resources and a lot of resentment built up. Around that same time, the RTA Board of Directors selected me to serve as the Executive Director.

Our region was dealing with depleted funding sources for transit projects. Rather than continue bickering with each other, it was an opportunity to come together and get the funding we needed. That meant we needed to have a plan. At the beginning of my tenure as Executive Director, the RTA launched a strategic plan effort and created Invest in Transit. The plan became a roadmap for the RTA and Transit Agencies to build a case in support of funding transit and the related tax increases.

We developed an advocacy campaign where all four agencies worked together to make sure our message was not only heard by lawmakers, but also by stakeholders who can advocate on transit’s behalf. All four of the agency CEOs travelled to speak with businesses, young professional groups, and community groups about the benefits of transit. The RTA created a video based on Invest in Transit, and we conducted a social media campaign to make our voices heard.

On the legislative level, we worked together to lobby our state legislators together as one force. It sent a powerful message when we were all in the same room, asking the same thing: support and build our economy by funding our transit system.

Our efforts paid off. Recently, our state passed the largest capital programme in its history. It will provide an unprecedented amount of money for our region’s transit system, and it was due to the collaboration between the RTA and its transit partners.

Technology is the primary catalyst for the evolution of our transit system.

Since we are not a rail operator, we would leave specific advancements of the industry to the transit operators. From a regional perspective, we must examine the industry’s evolution in a diverse region that features different bus and rail services.

Technology is the primary catalyst for the evolution of our transit system. The mobility ecosystem has evolved through technology by providing consumers with not only more options, like ride-hailing, but also creating higher expectations like convenient payment options and real-time information. Amongst the biggest effects on our transit system, more people are now working remotely thanks to improvements in technology, and therefore they do not have to take the train every day to work.

The other big change has been the proliferation of ride-hailing companies. It’s been an interesting adjustment from a public transport perspective. We’ve seen these companies increase congestion in urban areas, but we’ve also seen them as a solution for our first/last mile obstacle in more rural and suburban areas. We are currently conducting a pilot with one of these companies in a suburb where employees in a corporate campus can get a free car ride from a commuter rail station to work. Our hope is that this encourages people to leave their own cars at home and use a combination of ride-hailing and public transport to get to work.

Even with the introduction of new mobility options in our system – such as bike-share programmes, e-scooters, and, soon, autonomous vehicles – public transport remains the backbone of our ecosystem and fundamentally allows these choices to exist. These new services do not move the amount of people we do, but rather these new technologies actively encourage people to not own a car. If we have more of these options, there could be a greater likelihood that they will use transit instead.

What can be done to diversify the workforce in the rail sector? What advice would you give to those thinking about pursuing a career in rail?

I am a firm believer and proponent of diversifying our workforce.

I am a firm believer and proponent of diversifying our workforce. Bringing broad and differing opinions to the table creates better solutions to the issues. By surrounding yourself with people who come from different experiences and backgrounds, you can achieve better outcomes.

To mirror our diverse region, we are proud of the diversity on the RTA’s Board of Directors, each of whom represents a different part of our region – out of the 16 members, three are African American, three are women, and two are Hispanic. They are critical voices in advocating for more minority participation in transportation projects. The Transit Agencies also have diversity job fairs aimed at increasing minority employment at their respective agencies.

I am also personally involved in the Women’s Transportation Seminar; an international organisation dedicated to building the future of transportation through the global advancement of women. I often participate in mentoring programmes to support students who are interested in working in transportation. I also speak at universities and high schools, encouraging students to pursue a career in transportation.

Investment in rail research could ‘level up’ Northern England economy, according to report