Railway-induced vibration is usually accompanied by ground-borne noise. The severity of both can vary from country to country, can depend on ground/soil type, plus train wheel and track type. Here, Arcadis colleagues focus on two main challenges and present simple, practical methodologies which the rail industry can utilise to help address vibration and noise problems. 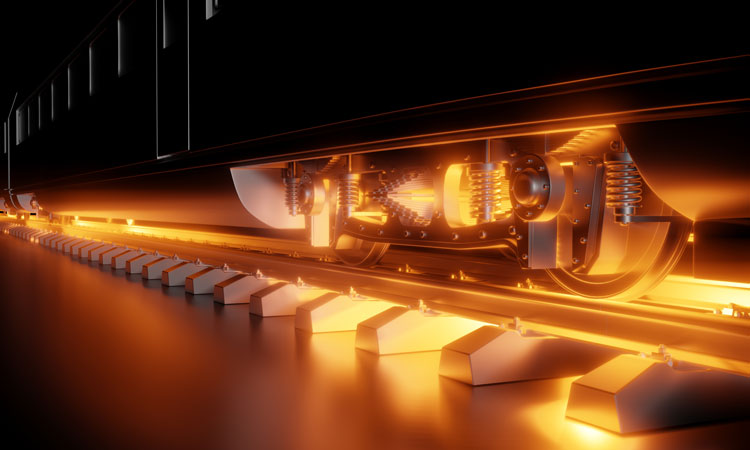 The railway operation requires high safety, reliability, availability and passenger comfort with low maintenance efforts in order to be successful in the competitive market with other means of transport. Nevertheless, it also needs the acceptance of the public, for which the environmental impact should be minimised. Over the last few decades, there has been a growing interest in the understanding and prediction of railway-induced ground-borne vibration and noise amongst geotechnical and railway engineering practitioners.

Ground-borne vibrations are generated primarily due to the rail-wheel interaction, which may also result in ground-borne noise in the buildings/dwellings located in close proximity of railway tracks. There are different factors influencing the vibration amplitude including, but not limited to, ground conditions and damping characteristics; type and number of trains; train speed; track configurations; level crossings and so on. Predicting railway vibrations is an inherently complex task involving numerous uncertainties, especially when performing such analysis over a large area of train trajectory.

Adverse environmental effects have prompted several researchers and practitioners to study railway ground-borne vibrations and noise. It started with experimental and empirical methods in the 1990s. Based on these results, analytical and numerical methods have been developed and calibrated. Numerical approaches are meanwhile state-of-the-art, with the availability of more advanced computational capacities.

In general, one can distinguish two different categories regarding railway vibrations. Firstly, the effect of vibration on the surrounding environment generated by freight and passenger trains (conventional railway traffic); secondly, cyclic-dynamic impact through the vibration induced by high-speed trains or train speed increase in conventional railway traffic, as shown in Figure 1.

Cyclic-Dynamic impact is nowadays considered a priority when designing high-speed rail networks or dealing with an increase in train speed, especially on earth structures. This is because the interaction between the track and the subsoil (points 0 and 1 in Figure 1) should meet the requirements regarding serviceability and stability. If the operational train speed exceeds the surface Rayleigh wave speed in soil, critical train speed phenomenon would occur. This will amplify the generated deformations, causing damage to railway tracks or set a demand for additional maintenance influencing operation.

Environmental impact includes both the annoyance to residents living in the dwelling houses or working in the office buildings in the vicinity of railway tracks; as well as the damage to the inflicted offices or residential buildings by generated vibrations. These effects can be described through propagation path before reaching a dwelling or building (points 1 and 2 in Figure 1), on foundation level (point 3 in Figure 1), and on different floor levels (points 4 and 5 in Figure 1).

First, practical approaches regarding the aforementioned effects shall be presented. Subsequently, a brief explanation as to how an abatement measure assessment works will be provided.

Figure 1 – Cyclic-dynamic phenomenon and environmental impact due to railway-induced vibration and noise.

Along with other researchers and practitioners, Arcadis has been actively involved in railway-induced vibration and noise projects over the past decades. These include problems related to both cyclic-dynamic phenomenon and environmental impact. A brief summary of current approaches follows here, in which the focus is given to vibration problems.

It is of importance to ensure that maximum operational speed could be achieved without damaging railway tracks due to exceeding threshold displacements, bumping effects and subsequently, inflicting disturbance to passengers, extra maintenance costs and operation of a line under the desired design train speed. This dictates that the cyclic-dynamic impact of track system and subsoils is to be assessed so as to fulfil the requirements concerning safety, reliability, operation and maintenance of high-speed rail. It is commonly accepted that the Rayleigh wave speed associated with generated vibration is identified as being the criterion to be achieved to mitigate the risk of amplifications of ground movements and deterioration of the track system. This is meanwhile state-of-the-art and acknowledged by railway authorities. However, from ongoing projects in different countries such as Germany, China and the Netherlands, it seems that the ultimate criterion is dynamic displacements which should be considered along with Rayleigh wave speed to limit maintenance efforts and to increase passenger comfort. A methodology for assessing cyclic-dynamic impact is shown in Figure 2.

Dealing with a huge amount of data within a certain distance of a project, for instance, along a railway track of tens of kilometres in length, is amongst the most challenging tasks in existing projects. This data includes the structural characteristics of house dwelling and their types (monument or modern building), various ground conditions as well as vibration characteristics of the railway line. For example, all GIS-related information concerning the dwelling houses or office buildings positioned along the railway track are being processed and dealt with individually. Moreover, the superstructure and ground conditions are characterised along the railway track. For this purpose, cooperation of geotechnical, railway, environmental and GIS experts is employed. In parallel, measurement campaigns are carried out in order to assess the strength of vibrations generated by passenger and/or freight trains along and perpendicular to railway tracks. After having processed all GIS-related information as well as measurement data, one should address issues with annoyance owing to vibrations at each single property along the track. For this purpose, through analytical/empirical methods along with numerical approaches, maximum vibration levels at each single property along the track are determined and identified. Subsequently, an appraisal process is used to ensure the vibrations are within the threshold levels. In the case of exceedance of threshold values, a thorough abatement measure assessment is to be performed. A methodology for assessing environmental impact is shown in Figure 3.

After having predicted the ground-borne vibrations, one could make a comparison between the obtained results and the allowable threshold values defined by the standards and regulation at the considered location. In the Netherlands, the threshold vibration levels for each single property positioned along the railway track are determined based on BTS. This is carried out based on determination of the maximum vibration level (Vmax) recorded at the location of a property, and the average vibration level (Vper) based on measurements during a certain period of time through the passage of trains. Once the threshold levels of Vmax or Vper defined based on BTS are exceeded, an abatement measure assessment is to be performed.

Railway-induced vibration and noise assessments involve dealing with numerous uncertainties. Arcadis, along with other researches and practitioners, has attempted to contribute to more rigorous approaches to minimise these uncertainties over the last two decades. In this article, two main challenges with simple practical methodologies have been provided; which can be employed to help practitioners address such problems.

Saeed Hosseinzadeh holds a double Master’s degree in Applied Earth Sciences (Delft University of Technology) and Minerals Resource Management (University of Exeter), specialising in Geotechnical Engineering. He currently works as a Geotechnical and Vibration Specialist at Arcadis. With more than seven years of hands-on experience in the geotechnical and railway engineering industry worldwide, Saeed has contributed to projects in Europe, America and Asia. Examples of his work include studies about railway-induced vibration and design of abatement measures considering environmental aspects.

Peter Schouten holds a Master’s degree in Civil Engineering and is a Senior Specialist in Geotechnical Engineering. He has been working in geotechnical consultancy for infrastructure projects since 1984. From the very beginning of his career, Peter has been involved in vibration assessment studies. The latter has evolved into both evaluation of environmental impact studies of train operations on railway tracks and dynamic stability analysis of tracks for major railway projects in the Netherlands and abroad.

Agnes van Uitert holds a Master’s degree in Applied Earth Sciences, specialising in Engineering Geology. She has been working as a Geotechnical Consultant at Arcadis since 2005. With more than 10 years of hands-on experience in the field of railway and pile driving induced vibrations, Agnes has so far contributed to several local and international projects. She is currently coordinating several vibration projects at the Geotechnical Department of Arcadis in the Netherlands.

Otto Heeres holds a PhD in Civil Engineering from Delft University of Technology where he also worked for seven years as an Assistant Professor of Soil Mechanics and Numerical Modelling. He is specialised in Geotechnical Engineering as well as in Dynamics of both soils and structures. With more than 25 years of hands-on experience worldwide in Dynamics, Civil and Geotechnical Engineering, Otto has been involved as technical design manager and principal consultant in a variety of projects including Engineering Vibration.

Gerhard Schulz holds a Master’s degree in Civil Engineering and is a specialist in Geotechnical Engineering. He has more than 30 years’ worldwide experience in high-speed railways from design to construction. For more than 20 years he has been involved in studies about the cyclic-dynamic impact of railways by using large-scale in-situ tests, measurements during operations and numerical analyses and developed mitigation measures. Gerhard was also engaged in the development of slab track especially on earth structures.

Gerard van der Werf holds Master’s degrees in Civil Engineering (railway engineering) and a Master’s degree in Business in Rail Systems and has published 21 articles. He has been working in Arcadis since 1995 as an international consultant in permanent way/asset management in research/project management for many (complex) railway projects. He was also a teacher in railway engineering at Delft University during 2000- 2003 at the department for Civil Engineering in the group of Railway Engineering of Professor Esveld.