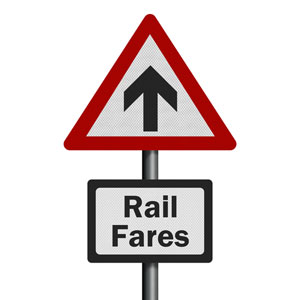 In response to the news that regulated fares will rise by an average of 8% in January, David Mapp, Commercial Director at the Association of Train Operating Companies, said:

“We know that these are difficult financial times for many people. The Government has decided that many fares need to rise above inflation for the next three years to help pay for more trains, better stations and faster services.

“Increasing the money raised from fares will mean that taxpayers contribute less to the running of the railways, whilst ensuring that vital investment can continue. All additional money raised through the change to RPI +3 will go straight back to the Government.

“The industry is working with the Government to cut the cost of running the railways, building on the progress that has already been made. A more efficient railway will help to limit fare rises in the future, and offer better long-term value for money for the taxpayer.”

What will these fare rises mean for the average commuter?

In real terms (i.e. once inflation is taken into account), travelling with a season ticket is cheaper now than it was 15 years ago. The average price for a single journey made using a season ticket in 1995/6 works out at £3.04, compared to £2.77 now.

Examples of season ticket breakdowns include:

How is ‘flex’ applied to regulated fares?

The Government has for many years allowed train companies to vary individual regulated fares by up to 5% above or by any amount below the average price change set by the Government. That flexibility was removed by the DfT in 2010 and then restored in 2011.

Flex does not allow operators to put up fares by the maximum amount on busy routes and lower them on quiet routes. Increases above RPI+3 must be balanced, on a weighted basis, by increases (or decreases) below RPI+3.This weighting ensures that all regulated fares across an operator must balance out at the average.

Each operator’s use of flex is thoroughly scrutinised by the DfT to make sure that it has complied with the rules.

What does the RPI figure mean for rail fares?

July’s RPI figure is used as a basis for the following January’s rise in regulated rail fares. Since 2004, the formula set by the Government to calculate the average rise has been RPI+1. The Government has decided that for the next three years, regulated fares will rise by RPI+3.

Regulated fares account for almost half of all rail journeys, and include season tickets and most Off Peak return tickets on longer distance fares.

Why are next year’s regulated fares going up more than they have previously?

Because of the pressure on public finances, the Government has decided that regulated fares should rise by an average of RPI+3 for the next three years as one of a number of tough decisions to ensure important investment in the railways can continue. These include more carriages to deal with overcrowding and major capital projects such as electrification, Crossrail and Thameslink.

Increasing the money raised through fares will also see taxpayers pay a smaller share of the overall cost of running the railways. Taxpayer contribution to the railways has already fallen by 37% over the last four years.

What happens to the extra money raised?

Under the Government-set franchise agreements that train companies work within, all additional revenue generated from the shift from RPI+1 to RPI+3 on regulated fares goes back to the Government.

The DfT calculates, on an operator by operator basis, the extra money likely to be generated by the change. Once this is agreed with the operator, the DfT makes a change to the premium or subsidy payments made by or to a train company. This process ensures that it is the Government, and not the operator, which gets the full benefit of the change in formula.

What has happened to fares since privatisation?

Over the past 10 years, the average fare actually paid by passengers has consistently fallen below the headline increases in fares, as passengers have increasingly switched to buying cheaper fares, such as Advance tickets.

This reflects not only that train companies are making more and more cheap tickets available – around 900,000 Advance fares are now sold a week, up from 500,000 in 2007/08 – but the fact that passengers have become more aware of their options when buying train tickets, helped by the fact that information on fares has become much more widely available through the internet.

Demand for rail travel has risen by 60% since privatisation and is expected to double in the next 20 to 30 years. Last year there were 1.33bn journeys made by rail – the highest number for 90 years.

Rail travel has bounced back strongly since the recession, rising by 5.4% in the first six months of the year.

How much will unregulated fares go up by?

How much do the railways cost?

The annual cost of running the railways is now around £10.5bn, of which around £6.5bn comes from fares, and around £4bn from the taxpayer.

The cost of running the railways has fallen in recent years, following earlier increases, at the same time that passenger numbers have risen, meaning that the industry unit cost of an average journey has fallen year on year – by 20% since 2006/7.

Following the McNulty report on rail value for money, the industry is working hard to find ways of reducing that cost even further.

By Association of Train Operating Companies