CN to invest in maintenance and expansion of tracks across Canada

The Canadian National Railway Company (CN) has announced that its investments in Saskatchewan, Manitoba, New Brunswick and Nova Scotia will be focused on safety and capacity to strengthen the rail network, help reduce emissions, and support economic growth. 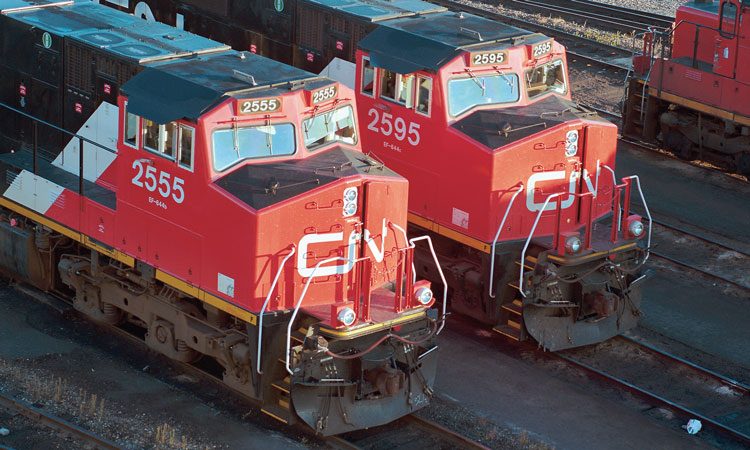 The Canadian National Railway Company (CN) has announced that, as part of its strategic investments to support growing demand and enable supply chains, it plans to invest approximately $105 million (CAD) across Saskatchewan, $105 million across Manitoba, $20 million across New Brunswick and $10 million across Nova Scotia in 2020. The investments will focus on the replacement of rail and ties, as well as the maintenance of bridges, level crossings, culverts, signal systems and other track infrastructure.

CN’s investments will create greater capacity, which supports reductions in its customer’s transportation supply chain GHG emissions, by encouraging the use of rail for long-haul needs. This reduces emissions, traffic congestion, accidents and burdens on public transportation infrastructure as one freight train can replace over 300 trucks from roads. Moving freight by rail instead of truck reduces GHG emissions by 75 per cent.  CN will continue to deploy important safety enhancing technologies across its network, such as autonomous technology.

The maintenance programme highlights for Saskatchewan include:

Grains and fertilizers, especially potash, make up a substantial portion of the traffic handled by CN in this Prairie province. The traffic also reflects the increasing diversification of the Saskatchewan economy by handling growing volumes of consumer goods and specialty crops through CN’s intermodal terminals in Saskatoon and Canada’s first privately operated intermodal terminal located in the Chuka Creek Business Park in Regina. Both Saskatoon and Regina boast metals distribution facilities. Saskatoon also has an automotive distribution facility and a major rail classification yard. In Bienfait, there is a CargoFlo bulk handling facility as well as forest products and metals distribution centres. Finally, in North Battleford, there is an additional forest products distribution centre.

The maintenance programme highlights for Manitoba include:

Manitoba is a major hub of CN’s transcontinental rail network. Much of its traffic passes through Winnipeg’s Symington Yard, CN’s only hump yard in Western Canada. In Winnipeg, there are also CargoFlo bulk handling and automotive distribution facilities, and an intermodal terminal.

The maintenance programme highlights for New Brunswick include:

Forest products make up a significant part of the traffic originating or terminating in the province of New Brunswick. CN also handles consumer goods and other intermodal traffic through its terminal in Moncton. Other CN facilities in Moncton include a major rail classification yard as well as an automotive distribution centre and a CargoFlo bulk handling facility. CN’s network extends to the ports of Belledune and Saint John, where CN has another CargoFlo bulk handling facility.

The Honourable Bill Oliver, Minister of Transportation and Infrastructure, Government of New Brunswick, said: “I am encouraged by CN’s planned capital investments to enhance its rail network in New Brunswick. With the modernisation of the Saint John port and the expansion and diversification work going on at the Port of Belledune, it is even more critical to have a supporting rail system to fully optimise our transportation infrastructure.”

The maintenance programme highlights for Nova Scotia include:

Nova Scotia is home to the Port of Halifax, where CN handles all rail-served containers imported and exported through the marine facility. Halifax is the site of a major Autoport, where automotive vehicles imported from overseas enter North America for distribution across the continent. One of CN’s intermodal terminals is also located in Halifax.

The Honourable Lloyd Hines, Minister of Transportation and Infrastructure Renewal, Government of Nova Scotia, said: “CN continues to build on the critical links between Nova Scotia and the global marketplace. Streamlining supply chain infrastructure continues to cement CN’s position as a world leader in intermodal transport and, in doing so, solidifies Nova Scotia’s place in the North American economy.”

CN is a true backbone of the economy, transporting more than $250 billion worth of goods annually for a wide range of business sectors, ranging from resource products to manufactured products to consumer goods, across a rail network of approximately 20,000 route-miles spanning Canada and mid-America. CN – along with its operating railway subsidiaries – serves the cities and ports of Vancouver, Prince Rupert, B.C., Montreal, Halifax, New Orleans, and Mobile, Ala., and the metropolitan areas of Toronto, Edmonton, Winnipeg, Calgary, Chicago, Memphis, Detroit, Duluth, Minn./Superior, Wis., and Jackson, Miss., with connections to all points in North America.