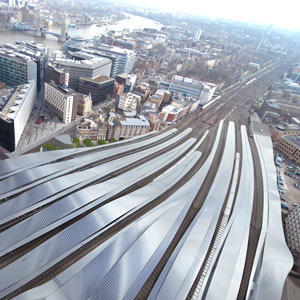 The transformation of London Bridge station has taken a major step forward after design proposals were given the go ahead by Southwark Council. A key part of the £6bn Thameslink programme, plans to redevelop London Bridge include a completely new platform layout, which will allow a metro-frequency of trains on the Thameslink route and the creation of Britain’s largest station concourse, providing more space and reduced congestion for passengers.

New eye-catching entrances on Tooley Street and St Thomas Street will make the station more accessible, easier to use and provide better connections for passengers and the local community.

David Higgins, Network Rail’s chief exectutive, said: “London Bridge is one of the busiest stations in the country and this investment is vital for passengers who want more space, less congestion and better services.

“Our proposals will breathe life back into London’s oldest rail terminus and help build on the programme of regeneration along the South Bank and Bankside. It will provide a focal point for the local communities it serves as well as the tens of millions of passengers who use it every year.

“We are grateful for the support we’ve received and will continue to work closely with our partners and the local authority to deliver the project efficiently and considerately over the coming years.”

Initial non-disruptive preparatory work is expected to start next year with the first major phase starting in 2013. The station will remain operational throughout the redevelopment and will be complete in 2018.