The completed construction zone is the first of its kind in the United States; it integrates high-speed passenger rail into an active airport. 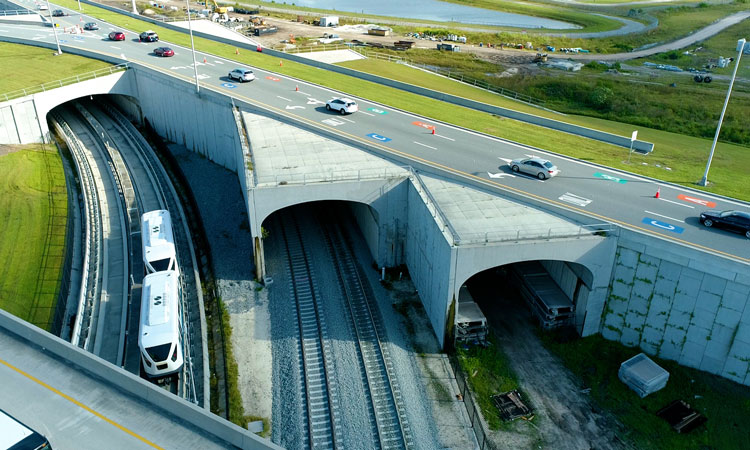 Brightline has completed the first major construction zone (Zone 2) on its 170-mile extension from West Palm Beach to Orlando International Airport (OIA). One of four zones along this extension, Zone 2 is a 3.5-mile-long section on Brightline’s corridor leading into OIA and represents one of the most complex and challenging areas for construction in the entire project.

Zone 2 is an engineered double track that travels under active airport taxiways and over tug roads running through the heart of OIA. Brightline’s construction of this zone includes six bridges, two underpasses and several airport improvements, including a new traffic interchange configuration at Cargo Road, located north of the airport, and the airport’s first roundabout designed to assist with traffic flow. Additionally, the steel used throughout Zone 2 and throughout Brightline’s Orlando corridor extension is 100 per cent recycled, American-made steel sourced from Fort Wayne, Indiana.

Beginning in 2023, Brightline trains will travel through the airport corridor at 35mph before heading east along SR 528 towards Cocoa where they will reach top speeds of 125mph. Trains traveling along Zone 2 will have access to the airport’s new Intermodal Terminal Facility and the Beachline Expressway/SR 528.

Brightline has completed additional infrastructure on the project to accommodate future transportation options through the airport including embankment, bridge foundations at the tug roads, and a shared underpass at Cargo Rd. The project was constructed in partnership with The Greater Orlando Aviation Authority (GOAA).

“Our construction through OIA presented one of the most complex construction efforts of this entire project and our successful completion is a testament to partnership, teamwork and out-of-the-box thinking,” Michael Cegelis, Executive Vice President of Development and Construction for Brightline, said. “The collective efforts of the Greater Orlando Aviation Authority, The Middlesex Corporation and our team resulted in the first ever high-speed rail corridor in one of the busiest airports in the nation.”

The Orlando extension is 70 per cent complete and employs more than 1,300 daily construction workers and is scheduled to be finished by the end of 2022. The Middlesex Corporation, based in Orlando, served as general contractor, and constructed the corridor over 33 months through the work of over 100 employees who logged more than 419,000 hours.

“The Middlesex Corporation is proud to have been an integral part of bringing the Brightline Orlando station to fruition with the completion of the Zone 2 corridor,” Al Aponas, President of The Middlesex Corporation, said. “When completed, this project will become a milestone in railroad history. Our workforce was committed to completing the project on time and are thrilled to see the excitement around its significance.

“The inclusion of intercity rail service at Orlando International Airport has been part of our vision since the planning and design of our world-class facility,” Brad Friel, Director of Planning and Development of the Greater Orlando Aviation Authority, said. “It is very rewarding that the Brightline team is able to help meet that goal nearly 40 years later.”

Watch the video below for more information about Brightline’s Zone 2 project.