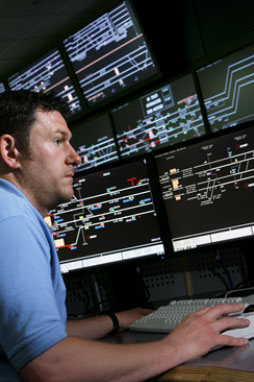 The largest-ever scheme to modernise the 1960s signalling infrastructure on the Great Western main line has started. The four-year scheme, once completed, could help cut delays by 50%, thus significantly boosting rail performance. Around 25,000 minutes of delays on average each year on the Great Western main line are potentially caused by problems with aging signalling equipment.

The major upgrade will also support the 10-year plan to expand services on the Great Western main line, catering to the 51% forecast increase in rail demand by the end of the decade.

In addition, the improvement work is also vital to prepare the signalling infrastructure, so that it is compatible with an electrified railway.

Patrick Hallgate, route managing director for Network Rail Western said: “We are safeguarding the long-term future of a vital rail artery in the South West of England and Thames Valley. The Great Western main line is running out of room with nearly 30m journeys and a growth rate of at least 5% each year. A robust and modernised signalling infrastructure is vital to cope with this burgeoning growth.

“In a few years’ time, the signalling infrastructure will be considered life-expired but we are ahead of the game by starting the improvements now. This programme is a vital building block for the transformation of Great Western, boosting performance, paving the way for electrification and supports major enhancement plans in Bristol, Swindon, Oxford, Reading and Newbury.”

The improvement will be carried out in five stages, starting from the Didcot area, to minimise disruption. Invensys has recently been appointed as the main contractor to deliver the work in the Didcot area.

The biggest programme of work will be carried out in the Bristol area, which is forecast to experience the highest number of passenger growth of 44% in the next decade. Around £150m will be invested in upgrading the signalling infrastructure in the area. The programme of work is designed to complement the capacity-boosting proposal to revamp the railway track around Bristol Temple Meads.

Around £20m will be invested in upgrading the signalling between Newbury and Reading. As part of this programme, work will be carried out to upgrade existing tracks to allow passenger trains to run. This will enable better train movement and potentially allow more trains to run, especially in times of congestions on race days at Newbury.

The signalling upgrade forms part of a wider ten-year, £5bn plan to transform the Great Western main line. The transformation programme comprises of several core packages of work, including electrification, between London and Bristol.

The signalling upgrade is the first core package of work in this transformation programme.