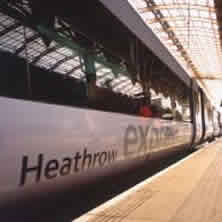 The Thames Valley Berkshire Local Enterprise Partnership (TVB LEP) is pleased to announce that Slough Borough Council’s proposal, leading on behalf of the TVB LEP for up to £500 million investment in improved rail access to Heathrow airport has been endorsed by the government.

The project, known as Western Rail Access to Heathrow (WRAtH), has been sponsored by the TVB LEP and offers numerous benefits to businesses from as far as South Wales and the South West, all the way to the Thames Valley itself. Before now, Heathrow has only had rail access in the London direction, but the new plans will allow the airport to connect with 12 million more people direct.

Steve Lamb, Chair of the TVB LEP commented, “This is great news for a number of regions across the UK. A common piece of feedback we hear from local enterprises and organisations looking to move to the area is access to Heathrow is a significant business benefit as it opens the door to the rest of the world’s emerging markets. The WRAtH project will give confidence to our businesses in the Thames Valley which is the most productive sub-region outside of London and is worth nearly £30bn.”

The Department for Transport (DfE) announced its plans to progress with the project as part of the new draft policy framework, which will form the basis of future sustainable aviation growth in the UK. Transport secretary Justine Greening stressed that up to £500m investment will be subject to a business case and backing of the aviation industry.

Ruth Bagley, Chief Executive of Slough Borough Council and lead on WRAtH for TVB LEP said “We are delighted that WRAtH has been endorsed by the Secretary of State for Transport today. This is a project Slough has been working on for more than three years with colleagues across Berkshire, gathering support from local authorities, the business community, LEP’s, Chambers of Commerce and individuals. WRAtH will provide a huge boost to the UK economy, generating an additional £1.5 billion economic activity, with £800 million of that and 42,000 jobs generated in the Thames Valley alone. A modal shift from road to rail will remove over 1 million car journeys from some of the most congested roads around Heathrow, benefitting businesses and residents in the area, and reducing CO2 emissions at the same time.”

The new rail line will cut up to 45 minutes off the journey to Heathrow from as far west as South Wales, with significant improvements for growing cities such as Swindon, Cardiff and Bristol. A recent study found that companies in the Thames Valley spend many millions annually on taxi fares to Heathrow because of the lengthy public transport options that currently exist.

The TVB LEP are a business led body, working to maintain the status of the region as the engine of the UK economy, and to further attract inward investment. The TVB LEP’s central initiatives are improving transport and infrastructure through the Western Rail Access to Heathrow (WRAtH) programme, widening access to superfast broadband throughout the Thames Valley, and ensuring a work-ready population through the development of skills and education opportunities.