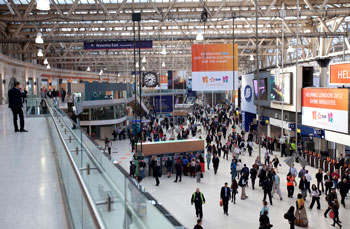 A new 220m balcony has opened at one of Britain’s busiest stations to help reduce congestion in time for the Olympic Games. The new balcony at London Waterloo – the longest at any British rail station – is part of Network Rail’s £25m improvement project to transform the station and smooth the journey for the 300,000 passengers who pass through each day. This has been achieved by installing escalators and repositioning retail outlets previously located in the middle of the main concourse onto the balcony. With new escalators and lifts, installed earlier in May, Waterloo station now has step-free access to Waterloo East.

The new balcony will provide passengers with a wider choice of places to eat and shop with an extra 20,000 sq. ft. of retail space. The new brands opening at the station are Yo! Sushi, Fat Face, Hotel Chocolat, Oliver Bonas, Links of London, Thomas Pink and new-to-station brand Joules. Further additions will include Italian eatery, Carluccio’s, Kiehl’s Sports Bar & Grill, Benugo and Corney & Barrow’s new concept bar The Cabin, which will be opening soon. Once all the new units are open, the retail capacity within the station will total 55,000 sq ft across 38 stores.

The rejuvenation of Waterloo station is part of Network Rail’s on-going programme of investment in key stations across the country to provide more space, reduce congestion and improve the facilities for passengers. The opening follows on from the successful launch of the new Western Concourse at King’s Cross, which opened back in March with record-breaking trading figures, mirroring the trend of growing sales coming from stations.

Network Rail’s retail and commercial activities generate vital funds that are reinvested directly back into the railway, limiting costs to taxpayers.

David Biggs, director of property at Network Rail, comments: “We are dedicated to improving the facilities, layout and retail experiences for millions of commuters nationwide through various station expansion projects within Britain’s major cities. As with the new western concourse at King’s Cross earlier this year, the Waterloo balcony project forms part of our wider retail strategy to create ‘destination’ stations for both rail passengers and non-travelling customers. It also provides a crucial, sustainable source of income for the station, which can be reinvested directly into the rail network to continuously improve our services to passengers.”

Tim Shoveller, managing director of the Network Rail/South West Trains alliance said: “Waterloo, as many of our customers know, is a very busy station. We have over 90m passengers passing through every year and there is 30% growth predicted by 2030 . Our challenge is to deliver extra capacity so our passengers can get the rail services they rely on.

“We needed to find a radical solution to improve the space and facilities at Waterloo. The opening of the balcony, with the removal of retail units from the concourse, crucially reduces congestion while still providing the facilities expected at a modern station. Passengers will now find it easier to get to and from their trains. The next crucial stage is to extend the platforms so we can run longer trains with more capacity, to cater for the predicted growth in passenger numbers.”

London Waterloo has become an important gateway to some of the best cultural institutions the city has to offer – from the Old Vic and The National Theatre to Shakespeare’s Globe. And with an increased number of visitors expected for the summer holidays, this redevelopment will help ease congestion on the main concourse during this busy period.

Waterloo station is one of the UK’s major transport hubs connecting London to popular destinations such as Bournemouth, Poole, Southampton, Portsmouth, Reading and Windsor.