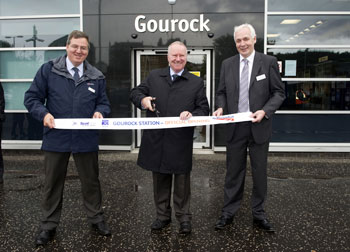 The event marked the completion of a two-year, £8million project by Network Rail – the owner and operator of Scotland’s railway infrastructure – to provide a brighter and more welcoming environment for passengers and staff.

A brand-new station building has been constructed, the platforms and canopies renovated and the sea-wall redesigned to incorporate glazed sections that offer unobstructed sea views for visitors.

A new covered walkway also connects the station to the nearby ferry terminal, while the redesign of Station Road and the car-park has resulted in an increase in commuter parking as well as a better integration of road, rail and ferry links.

A key transport hub for the area, the new station has also been designed to accommodate any future redevelopment of the waterfront area.

David Simpson, Network Rail route managing director for Scotland, said, “Gourock Station is now fit for the modern commuter – providing a functional, yet attractive, building that creates a great first impression for visitors to the waterfront.

“Network Rail is committed to investing in our network and infrastructure to make rail a competitive alternative to the car and this station is an excellent example of the facilities the industry can provide for commuters.”

Alex Neil, cabinet secretary for infrastructure and capital investment, said: “The Scottish Government is committed to enhancing rail services. Our £5 billion blueprint for the future of Scotland’s trains and rail network, announced earlier this summer, sets out a raft of measures for attractive and affordable fares, supports growth in freight and demands better integration of rail services with buses, bikes and ferries.

“This visit today allows me to see at first hand the completion of the enhanced facilities at Gourock and I look forward to it playing a role in boosting the area as a holiday and day trip destination. The new station building and the covered walkway to the ferry terminal will also be more welcoming for passengers.

“The way in which rail industry partners have worked together to deliver this project, without disrupting rail services, is an example for future project delivery. The Alliance agreement recently signed between Network Rail and ScotRail can also build upon the good practice which has been evident at Gourock to help progress upcoming rail projects across the country.”

Steve Montgomery, managing director of ScotRail, added: “Our customers will undoubtedly appreciate this excellent investment in Gourock station, with much improved facilities and a more welcoming atmosphere. Investments of this calibre attract more people to rail which is warmly welcomed.”