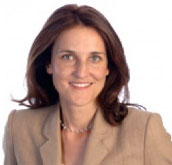 Rail passengers from London to Scotland will benefit from a package of improvements including more trains and more seats, as Rail Minister Theresa Villiers unveiled First West Coast Limited as the new operator for the ‘InterCity West Coast’ franchise. As part of the deal First West Coast Limited will introduce 11 new six-car electric trains which will enable more seats to be provided across the franchise, including greater capacity on the Birmingham to Scotland route. New services are planned from Blackpool, Telford, Shrewsbury and Bolton to London. First West Coast Limited has also committed to cut the cost of its ‘Standard Anytime’ fares by an average of 15% within the first two years.

The franchise stretches from London to Glasgow, connecting many of the UK’s major cities including Manchester, Liverpool, Birmingham, Wolverhampton, Edinburgh, Lancaster and Chester. The franchise deal is worth £5.5 billion (net present value) over the lifetime of the contract.

“This new franchise will deliver big improvements for passengers, with more seats and plans for more services. Targets to meet on passenger satisfaction will be introduced for the first time in an InterCity rail franchise and passengers will also benefit from smart ticketing and from investment in stations.

“The West Coast is the first of the new longer franchises to be let by the Coalition which has helped us secure real benefits for passengers by encouraging First West Coast Limited to invest in the future of the service.”

Benefits the new franchise will offer passengers include:

One response to “New operator for West Coast rail passengers”