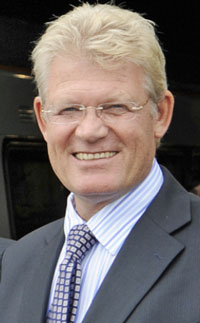 The West Midlands will benefit from being right at the heart of Britain’s high speed rail network with the announcement of the northern routes, says the boss of the region’s transport authority. Centro’s chief executive Geoff Inskip said the Transport Secretary’s forthcoming announcement of HS2 phase 2 would connect the West Midlands with the East Midlands, Yorkshire and the North West and boost the regional economies.

An announcement on the line of route and stations for phase 2 – which will connect eight of the UK’s ten biggest cities – is expected in the next few days.

“So much of the talk so far has inevitably focused on the phase one link from Birmingham to London, but the economic benefits of linking our regions with faster, direct services are often overlooked,” Mr Inskip said.

“Journeys times between Birmingham and Manchester and Leeds will be halved by HS2 and this is great news for our region and theirs.

“We’re excited because we’re right at the heart of this network and the challenge for us now is to get the very best return we can from HS2.”

“Our challenge is to ensure local and regional transport links in seamlessly with high speed rail,” he added.

Mr Inskip said Centro had drawn up plans to increase local and regional passenger services, such as adding services from Wolverhampton to Birmingham Airport and introducing a Walsall-London service, using the released capacity.

Road congestion is costing the West Midlands £2.3bn per year and Centro also has plans to reopen the Walsall-Stourbridge freight line transferring freight from road to rail.

Work is already underway on the £127m Metro extension through Birmingham city centre and the £600m redevelopment of Birmingham New Street station.

Independent research reveals phase one of HS2 will generate 22,000 jobs in the West Midlands and deliver £1.5bn per year to the regional economy.