ETCS is a common signalling system… 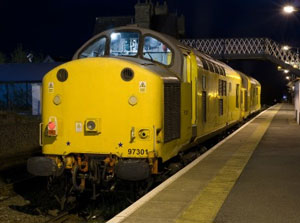 The breakthrough came as part of Hitachi Rail Europe’s ‘Verification-Train 3’ project to trial ETCS onboard equipment in the UK. During this project, the Class 97301 locomotive has been successfully retro-fitted with the Hitachi onboard system to prove interoperability with other systems currently in use.

As part of the recent success, the Hitachi system was correctly identified on the Network Rail Signalling System and Control Centre in Wales (Machynlleth) without any system failures. The locomotive was driven under its own power with ETCS Level 2 via the GSM-R radio network in various operational modes such as ‘Staff Responsible’, ‘On Sight’, ‘Shunting’ and ‘Full Supervision’.

Richard Tomlin, Signalling Project Manager at Hitachi Rail Europe is delighted with the success: “We have been working towards this key milestone for some time now and are delighted that we achieved this operation at a very early stage in the project. It gives us the opportunity to prove to the industry that our technology has full interoperability and can communicate with other suppliers’ systems. We are now able to move into the next phase of test running”.

Jim Doughty, Project Manager at Network Rail, commented: “The success of the Hitachi trials demonstrates Network Rail’s continued commitment to supporting the purveyors of ETCS Onboard Systems and to providing a fully interoperable ETCS system within the UK.“

ETCS is a common signalling system which has been developed throughout Europe to enable train services to cross frontiers and boundaries between different countries without the need to change signalling systems or locomotives. ETCS is part of the European Rail Traffic Management System (ERTMS) and many systems have already been implemented around the world.

Following the first UK ERTMS Scheme on the Cambrian Line in 2011, Network Rail is now embarking on a phased trackside and associated train fitment implementation programme, in order to realise the benefits of a radio-based cab signalling system with a reduced trackside infrastructure.