Siemens to deliver locomotives to Finland 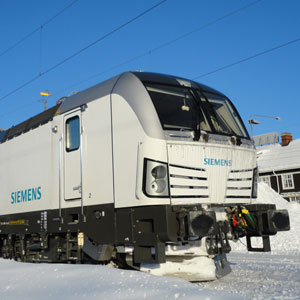 The Finnish Railways VR Group intends to place an order for 80 electric Vectron locomotives with Siemens worth more than 300 million Euros. This is the largest rolling stock investment ever made by VR Group and the second-largest purchase in Europe this year. The order will include an option for an additional 97 locomotives as well as the maintenance of the locomotives over a period of 10 years. The contracts will be signed in the very near future. The new locomotives designed to operate on broad gauge tracks are scheduled to be delivered one after the other from 2016.

The first electric locomotives start operational services in 2017, and the entire fleet will be delivered to Finland by 2026. In both freight and passenger transportation they will also replace the existing Soviet-type locomotives, some of which were built in the 1970s. “For Siemens this marks the largest single contract so far for its latest generation of Vectron locomotives and the first for this type in the broad gauge version”, emphasizes Jochen Eickholt, CEO of the Siemens Rail Systems Division. The electric locomotives will be manufactured at the Siemens plant in Munich, Germany, and the bogies at the Siemens plant in Graz, Austria.

The new locomotives are designed to operate reliably even under the extreme climatic conditions in Scandinavia during their long service life. Siemens was able to provide clear evidence of their capability during comprehensive test and authorization trips in Sweden and Norway. “The selection was made after a long and careful examination. The electric locomotive manufactured by Siemens is well suited to the challenging conditions in Finland”, says VR Group’s President and CEO Mikael Aro. The locomotives for VR-Yhtymä Oy will benefit from the valuable experience gained during these tests. In addition, the Vectron fleet has already traveled far more than one million kilometers. Vectron locomotives are operating according to timetable in Germany, Poland and Sweden. The new generation of electric Siemens locomotives is well established in the market. Siemens was already able to sell more than 50 of them to seven international customers so far.

The Vectron locomotives are based on a technical platform. This concept enables Siemens to design and manufacture vehicle variants such as alternating system or multi system locomotives according to customer-specific requirements within a short time. Authorisation has already been granted for Germany, Austria, Hungary, Poland, Romania and Sweden.