New Intercity Express Train arrives in the UK from Japan

The first new Hitachi Intercity Express Train bound for GWR’s Devon and Cornwall route has now arrived in the UK from Japan. 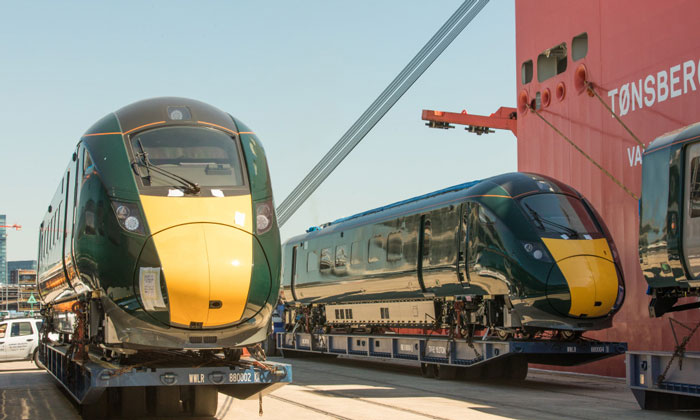 The train will now begin testing prior to entering passenger service from summer next year with two further test trains due to arrive in the UK shortly.

The new trains (which will connect London Paddington to Exeter, Plymouth, Penzance and many more areas in 2018) are fitted with bi-mode technology, allowing trains to use both diesel and electric power, and are designed to withstand the region’s variable weather conditions.

The first wave of InterCity Express Trains will run on the historic Great Western main line from this autumn, connecting London to key UK cities including Reading, Bath, Bristol and Cardiff with the production of these trains already underway in the UK at Newton Aycliffe, County Durham.

From Summer 2018 a second wave of new trains will begin running as far south as Penzance along coastal routes in Devon and Cornwall, with the first of these trains having already arrived in the UK.

“Passengers travelling between London and the South West are today a step closer to experiencing modern trains,” added Berry Sas, Projects Director at Hitachi Rail Europe. “We are now excited to begin testing on the region’s iconic railway as we continue towards the brand-new fleet entering passenger service next year.”

The entire fleet of 93 trains will be in passenger service by the end of 2019.