The Malaysian Rail Industry Corporation (MARIC) and the UK’s Railway Industry Association (RIA) have signed a Memorandum of Understanding (MoU) that will see the two countries working more closely together, benefiting the members of both rail associations. 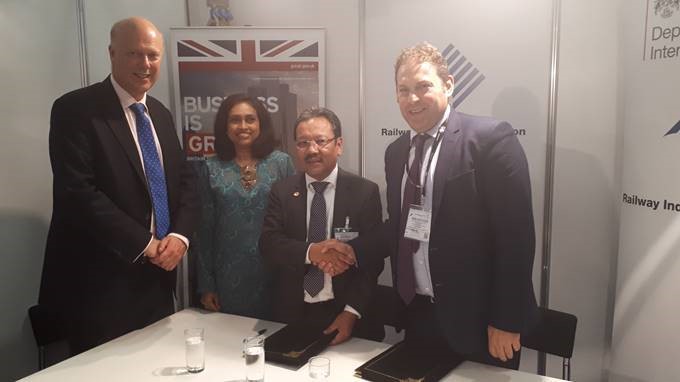 The MoU was signed by Darren Caplan, Chief Executive of RIA, and Datuk Dr Yusoff Sulaiman, Chairman of MARIC, with the UK Secretary of State Chris Grayling MP and the Malaysian Ambassador to Germany, Her Excellency Sarah Al Bakri Devadason, acting as witnesses at a ceremony at InnoTrans 2018 in Berlin.

The new partnership will benefit both countries’ rail industries by promoting closer ties and knowledge transfers and promoting greater trade links. Both countries have several high-profile rail projects which will benefit from further collaboration between the two industries.

The MoU will also build on the current good relations between the two countries. Dr Yusoff Sulaiman of MARIC presented to the Department for International Trade (DIT) and RIA mission members visiting Malaysia in November 2017, one of a number of missions and exhibitions over the past few years that RIA has organised, often in partnership with DIT – including at Rail Solutions Asia, held in Kuala Lumpur every May. The British High Commission also has a close working relationship with MARIC, which this MoU will help strengthen.

Darren Caplan, Chief Executive of the UK Railway Industry Association (RIA) said: “This partnership brings together two countries’ rail industries that will have much to benefit from further collaboration, building on the already strong relationship between MARIC and RIA. Now is an exciting time for both the Malaysian and UK railways, and this MoU will help Malaysian and UK companies understand each other’s markets, work together to innovate and to share knowledge – for the benefit of all. As the UK prepares to leave the European Union, it is vital that we continue to build relationships with countries across the world and promote a truly Global Britain.”

Datuk Dr Yusoff Sulaiman, Chairman of the Malaysian Rail Industry Corporation (MARIC) said: “Working with the RIA of the United Kingdom will see a number of benefits and opportunities for all members of MARIC. We see both the UK and Malaysian rail markets growing in the years ahead – and through greater dialogue and partnership, we hope to see not only both memberships benefiting, but the rail industries and economies of both countries too. We look forward to working with RIA in the coming months and years ahead.”