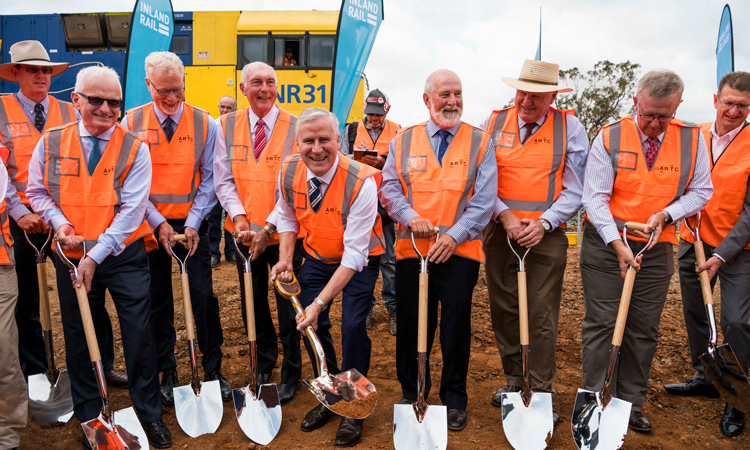 Construction on the 1,700km Inland Rail project at Parkes, NSW has officially begun.

Construction is beginning where the first 5.3km of new rail for Inland Rail will be built, and around 98km of existing corridors are being upgraded between Parkes to Narromine.

“When the line becomes operational in 2025, it will facilitate rail freight direct between Brisbane and Melbourne in less than 24 hours, significantly improving current capacity and transit times.

“Importantly, this will also remove truck movements from major highways which will improve safety, environmental outcomes and will mean north-south freight movements can bypass Sydney.”

Inland Rail will directly connect Australia’s second and third largest cities by rail, allowing double stacking of containers on trains of up to 1.8km in length.

“Its economic benefit is further enhanced at the intersection at Parkes with the East-West rail line, opening up Adelaide and Perth for traffic, as well as the major NSW ports,” Danny continued.

“Key infrastructure like Inland Rail will improve the efficiency of our freight system. ARA looks forward to complementary infrastructure initiatives, regulatory reform and planning that will be found in the National Freight and Supply Chain Strategy, to be considered by Transport Ministers in 2019.

“ARA acknowledges the key role of the Australian Rail Track Corporation (ARTC), who will build, own and maintain the line. The ARTC continues to consult with affected land owners as part of this project.”

ARTC CEO, John Fullerton, said: “When Inland Rail is operational, Parkes will be an important hub with double-stacked, 1,800m trains connecting the west to Perth and Adelaide, and along the east coast between Melbourne and Brisbane. Inland Rail will enhance the national freight rail network – creating jobs, reducing supply chain costs and making Australia more competitive by linking with other major infrastructure to connect cities and farms to markets; faster, safer and more efficiently.”

The Australian government has committed $9.3 billion for ARTC to develop and build Inland Rail. Additional funds will come from a partnership with the private sector.

The second ARA/ALC Inland Rail Conference will be held in 2019, with planning progressing for the event to be held in Toowoomba on 21-22 August 2019. This will continue the crucial dialogues with industry and communities impacted by the project.