The first 38 of the Desiro RUS type regional trains are to be built at the Siemens plant in Krefeld, Germany… 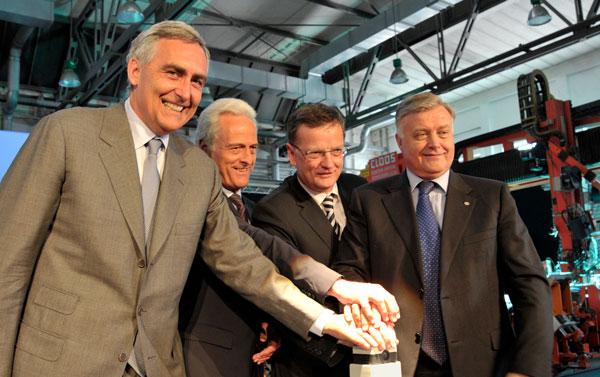 Vladimir Yakunin, president of Russian Railways (RZD), and Peter Löscher, Siemens CEO, today officially launched the production of regional trains for the Russian city Sochi in a ceremony that was attended by Dr. Peter Ramsauer, German Federal Minister of Transport. The first 38 of the total 54 Desiro RUS type regional trains ordered in 2009 are to be built at the Siemens plant in Krefeld, Germany. The increased localization of regional train production in Russia is due to start in 2012 with the manufacture of the remaining 16 Desiro RUS trains under that order. “Mayors and urban planners in Russia are likewise faced with the challenge of having to increase the quality of life and the competitiveness of their cities while conserving resources and protecting the environment at the same time. Our green infrastructure technologies are helping Russia to reach its goals of energy efficiency and climate protection,” said Siemens CEO Peter Löscher.

Russia is one of the world’s biggest railway equipment markets. In the next 30 years the country plans to invest a total of over €300 billion in new rolling stock and infrastructure. The urban transit networks are supposed to benefit from this investment as well. Russia’s railway service operates more miles of track than any other country in Europe.

The contract concluded in 2009 for the supply of 54 regional trains has a volume of approximately €580 million. The Desiro type trains designed by Siemens for regional rail service can run at a top speed of 160 km/h. In Russia, these trains go by the name of Lastochka – the swallow. The first units are scheduled to enter revenue service in Sochi in autumn 2013.