Bombardier Transportation has signed a framework agreement with Siemens AG… 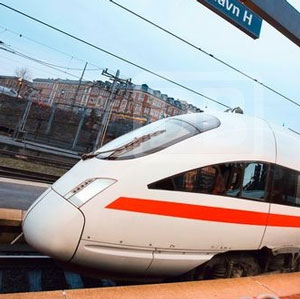 Bombardier Transportation has signed a framework agreement with Siemens AG to become a partner to develop and supply important components of up to 300 ICx high speed trains for Deutsche Bahn (DB AG).

The first call-off for 130 trains is worth an estimated 1.3 billion euro ($1.8 billion US) to Bombardier. DB AG is planning to place an additional call-off with Siemens for a further 90 trains. The combined order volume of 220 trains would be worth approximately 2.1 billion euro ($3 billion US) to Bombardier. The framework agreement between Siemens and DB AG also includes an option for up to 80 additional trains that could be ordered at any time until the year 2030.

Together with Bombardier, Siemens has developed an innovative and flexible vehicle concept which allows the ICx to be adapted to the individual requirements of various transport situations.

Bombardier will supply Siemens with, among other components, all the body shells as well as trailer bogies of the new ICx fleet. Furthermore, Bombardier will carry out the final assembly of all end coaches and of some intermediate coaches.

Stephane Rambaud-Measson, President of the Passengers division of Bombardier Transportation, said: “We are proud to have received the order from Siemens to contribute significantly to the design and production for the ICx project. The technical solutions developed and produced by Bombardier will make a significant contribution to this key Deutsche Bahn project. The ICx will have a decisive influence on the future of long-distance travel in Germany and will be a showcase project.”

Oliver Schmidt, Vice President Sales North of the Passengers division, added: “We are delighted to be playing a decisive role in a big project in our home market here in Germany. We will be developing and producing key technological aspects of the ICx project from our sites in Gorlitz, Hennigsdorf and Siegen. This includes the aerodynamics, the innovative body shell and the BOMBARDIER FLEXX Eco bogie. With these items, we’re contributing massively to the cost-effectiveness of the trains and to the comfort of the passengers.”

The steel body shells for the new high speed trains are optimised in terms of aerodynamics and weight, enabling significant reductions in energy consumption. They are being developed in the Bombardier factory in Hennigsdorf and are being manufactured in Gorlitz. Project management takes place at both sites. Hennigsdorf is responsible for the final assembly of all ICx end coaches. Bombardier will also carry out the final assembly of one intermediate coach per train at this site. The FLEXX Eco trailer bogies reduce vehicle weight, energy consumption and noise emission. They are being supplied from the Bombardier site in Siegen. The production of the ICx will start in the summer of 2013.