Ensuring the safety of the Brenner Base Tunnel construction sites

Below the Brenner Pass, from Innsbruck/Tulfes in Austria to Franzensfeste in Italy, the longest underground railway connection in the world is being built – the 64km-long Brenner Base Tunnel. Here, Tunnel Safety Coordinator, Erwin Reichel, explains the intricacies of ensuring sufficient safety measures are coordinated and implemented for such an extensive project in case of the most likely form of major accident – fire. 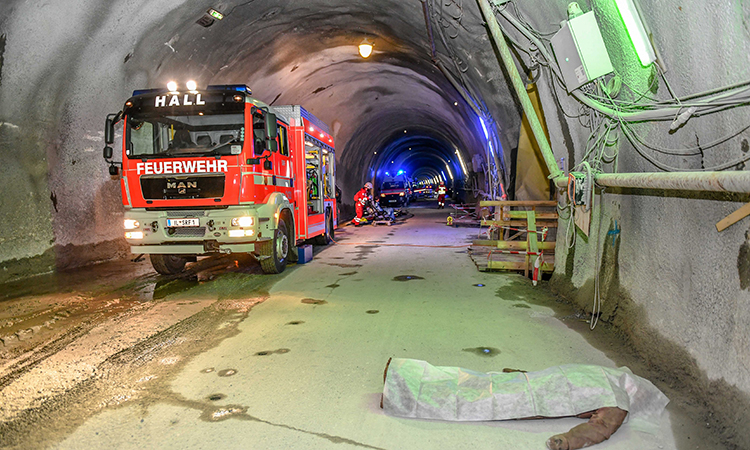 Three tunnels – two main tubes, each housing single tracks for one-way train traffic, plus a smaller tunnel serving as an exploratory tunnel – are being built. The exploratory tunnel will serve as a service, rescue and drainage tunnel during the operational phase. A total of 230km of tunnels will be built, in a complex system, constructed by both conventional methods and by tunnel boring machines (TBMs). The overall project coordination – from construction through to commissioning – is the responsibility of the European company Galleria di Base del Brennero – Brenner Base Tunnel BBT SE (BBT SE).

The occupational health and safety plans also cover major events affecting third parties, such as fire, the environment and technical events. The coordination of the health and safety of workers – from the above-ground construction site to the installation of the railway technology – will be managed and headed by BBT SE. For this purpose, the construction site coordinators, the supervisory body and the competent labour inspectorate are also required on the Austrian territory, in addition to BBT SE.

Safety planning scenarios range from classic cave‑ins to fire, injuries, gas leaks and exceedance of limit values. In principle, fires and the spread of smoke are dealt with most intensively, as only a minimal amount of time can pass before the safety-related and impact‑oriented measures begin. Fire seems to be the most complex, yet most likely, form of major accident. 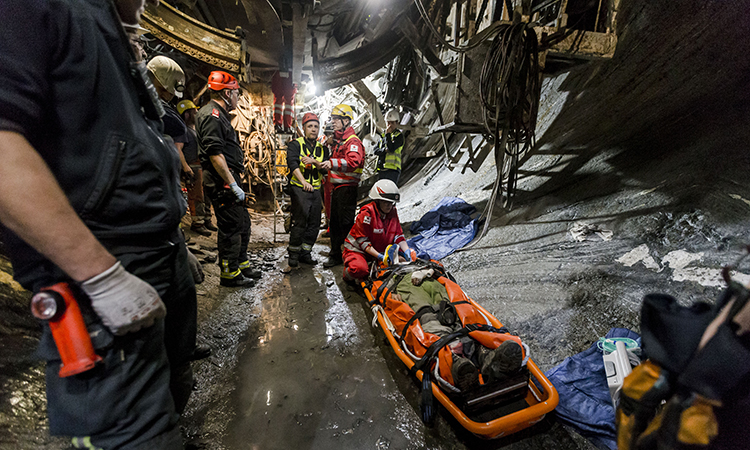 A recovery training exercise under the TBM.

The avoidance of personal injury is the foremost priority. The second priority is property value protection. Two different approaches are chosen for personal protection. Self-rescue and rescue by external forces.

In the event of an incident in a tunnel, the self‑rescue phase is particularly crucial. Above all, in a fire, a dangerous climate forms very quickly due to the smoke and heat. The quality of breathable air declines rapidly and becomes toxic very quickly. If self-rescue does not result in all persons being evacuated from the tunnel system, an emergency rescue must be carried out.

In the event of an incident in a tunnel, it is of vital importance for the emergency rescue operation that the deployment concept and emergency personnel equipment consider the conditions regarding the accessibility of the tunnels, thus enabling optimal deployment. An important requirement for a successful emergency rescue is the shortest possible response time from the moment the alarm is triggered to the emergency personnel reaching the tunnel portals and, subsequently, the area of the incident.

However, in scenarios involving a fire or an explosion, the approaching fire brigades can only intervene if they reach the site of the incident within the first 20 minutes1.

Contracts with the emergency services 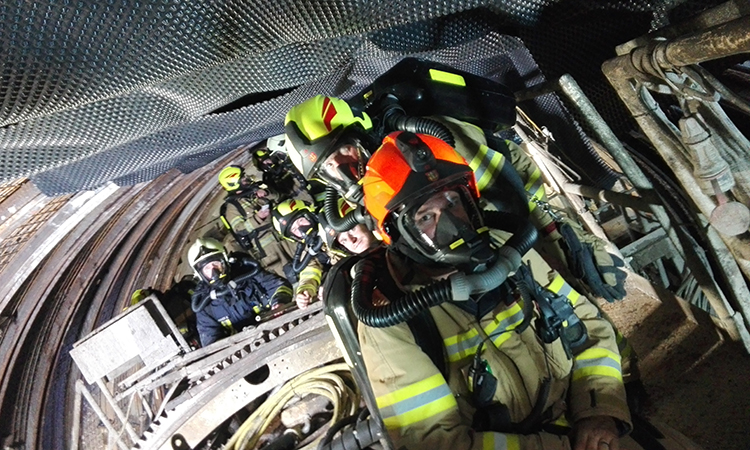 A fire brigade training exercise on the TBM with respirators.

The technical installations for emergency rescue operations have also been planned in collaboration with the emergency services. The design of the refuge containers (duration of the oxygen supply) is based on the course of the rescue measures. A rescue mission by the fire brigade will only commence after a consultation with the client’s and contractor’s representatives. In principle, the tunnel system will not be entered to extinguish a fire; the risk of putting out a fire is too high for the emergency services in this case. This ensures the safest possible deployment and means that the rescue concept is consistently traceable.

Organisation of a mission

The interaction between the fire brigade, police and rescue services is important and must be constantly practised”

The established hierarchy plays a key role in the organisational handling of missions. The competencies and responsibilities must be defined in emergency plans, which are clarified before the start of the construction project. Subsequently, crisis teams must be formed, and a process organisation created.

The organisation and deployment of the emergency service personnel generally has the following definitive characteristics:

For underground operations, the interaction between the fire brigade, police and rescue services is important and must be constantly practised, and the tactics must be adapted to the structural situation.

What do we need, from a technical point of view, to achieve successful implementation?

Anyone entering or leaving the tunnel is registered. For complex underground transport routes, such as in the Brenner Base Tunnel, the precise location of people within the tunnel system is also very important. Knowing which drift, segment of the tunnel or refuge container people are in (in case of an emergency) is crucial for planning the rescue operation.

In the event of a deployment, a functioning, efficient means of communication is indispensable for a successful operation. Different and, above all, independent communication systems are installed in the tunnel system for this purpose. These include:

In particular, communication between injured or trapped persons and the rescue services is crucial and, for this reason, the systems must be designed to be redundant and fail-safe.

Special attention was paid to the topic of ventilation in the event of an emergency as early as in the call for tenders. The following core assumptions must be fulfilled with regard to the ventilation concept:

Ventilation in the event of a fire 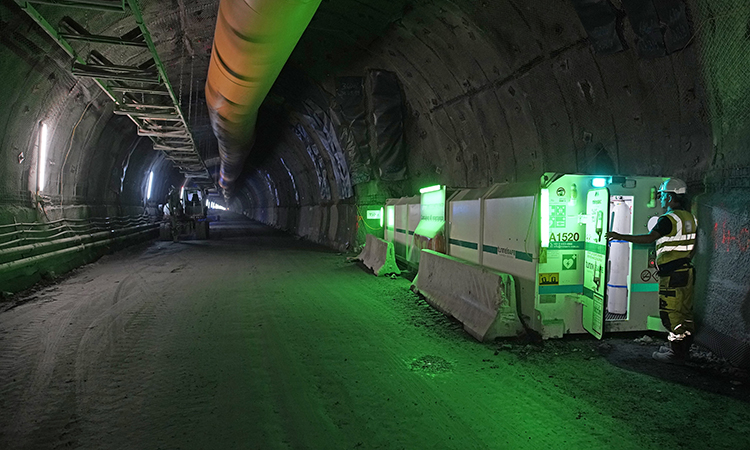 Rescue containers offer protection against explosive gases and, above all, smoke in the event of a fire.

Rescue containers offer protection against explosive gases and, above all, smoke in the event of a fire. They should be used if it is not possible to escape to a permanent safe zone (above or below ground) with an oxygen self-rescuer.

Positioning of the refuge chamber

The construction site safety centre must be staffed at all times (even during shut-down periods/holidays/exiting). It is configured as the central control and monitoring centre for the tunnel construction site. All monitored tunnel technology is displayed with actual status evaluations (personnel detection, fire protection systems, gas measurement displays, e-installation system, cooling system, ventilation system) and the ventilation, alarms and smoke-tight doors in the logistics connecting side tunnels can also be remotely controlled from this location.

Erwin Reichel studied chemistry at the Leopold-Franzens University in Innsbruck and went on to train as a fire officer in Vienna. Between 2003 and 2015, Erwin was the Chief Fire Officer of the Innsbruck Fire Brigade and, since 2016, he has been the Safety Director of the Brenner Base Tunnel Project. 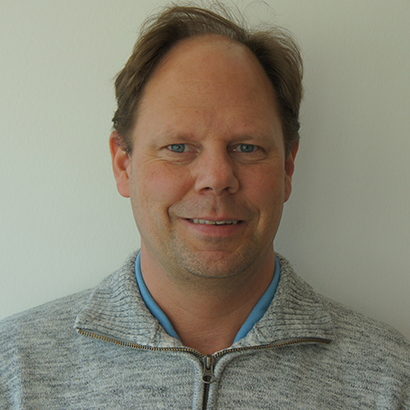