Around 100 years ago, electrification allowed Swiss railways to say goodbye to fossil energy sources for the first time. Step by step, ‘white coal’, i.e. hydropower, replaced coal as the primary energy source. This is now happening for a second time – with all fossil fuels being replaced by renewables over the next 15 to 20 years. Once again, electrification will be playing an important role. In this article, Matthias Tuchschmid, Head of the ‘Energy Saving and Climate Neutrality’ programme, provides an insight into the solutions and challenges for producing sustainable, climate-friendly mobility. 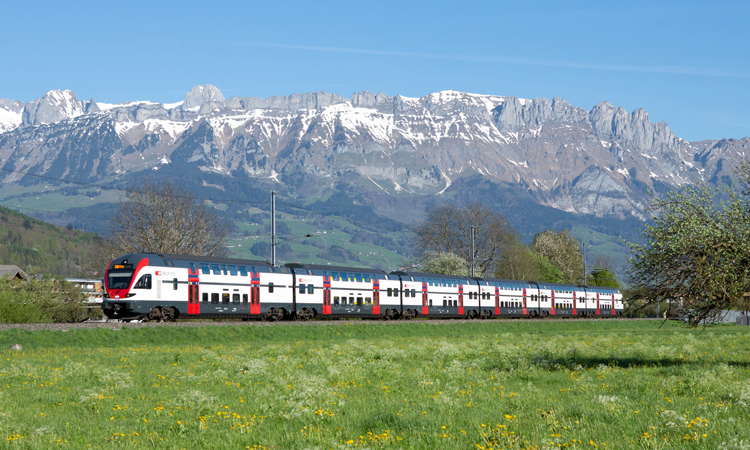 At present, the Swiss Federal Railways (SBB) network is almost completely electrified; sections of track without overhead contact lines are only to be found in some marshalling yards, maintenance workshops and industrial sidings. This is the result of a development that began more than 100 years ago. As early as 1907, Maschinenfabrik Oerlikon equipped the Zurich Seebach-Wettingen line with single-phase alternating current and tested various locomotives on it.

Following the outbreak of the First World War, the price of coal rose sharply. This was a significant factor in the decision by the SBB’s board of directors in 1916 to electrify the Gotthard line. Four years later, the first electrically powered trains were running from Erstfeld to Biasca; another 15 years later, 70 per cent of the SBB network had been electrified.

The high demand for electricity led to SBB building a total of eight hydroelectric power stations in the first half of the 20th century as well as developing its own 16.7Hz transmission network. To cope with power peaks, five additional frequency converters were built in the second half of the 20th century. These convert the power from the 50Hz domestic power grid to the 16.7Hz traction power grid and back again, as required.

Climate-friendly mobility thanks to electrification and hydropower

For more than 50 years, trains have been returning energy to the overhead contact line through brake energy recuperation. Together with the traction power from the hydroelectric power stations, this gives railways a major advantage in terms of energy requirements. To meet purely operational running requirements, SBB’s long-distance trains only need around 6kWh to convey one person over 100km; this corresponds to about half of what a modern electric car needs over the same distance (this assumes average capacity utilisation of around 30 per cent in each case.) As regards regional services, the difference is somewhat less marked because of lower capacity utilisation and more frequent stops; trains running regional services still need around 12kWh to convey one person over 100km. However, the indirect energy requirement for roadway and vehicle construction, especially for battery manufacture in the case of electric cars, also has an impact. Overall, railways require four to six times less energy than roads.

By using hydropower as its renewable energy source, railways also score points in terms of CO2 emissions. Taking into account the ‘grey’ emissions from roadway and vehicle construction, rail transport is around 30 times more climate-friendly than fossil-fuel powered road vehicles, and around 10 times more so than electric vehicles. 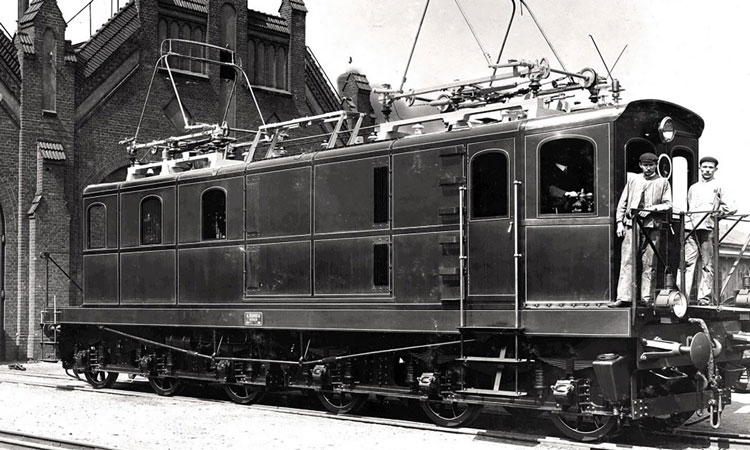 Locomotive No. 3 fitted with bow pantographs for the overhead contact line on the Regensdorf‑Wettingen route; photo taken in 1907. Credit: Author unknown/Wikimedia)

For a second time: saying goodbye to the remaining fossil fuels

Although the rail network in Switzerland is largely electrified, SBB still spends almost CHF 30 million every year on fossil fuels. In total, SBB’s consumption of natural gas and diesel, and its use of oil for heating, produces around 90,000 tonnes of CO2 per year. Almost 40 per cent of this comes from heating buildings; some 600 buildings are still heated by oil and natural gas. Furthermore, SBB Cargo’s and SBB Infrastructure’s diesel-powered shunting and mainline locomotives are responsible for around 36 per cent of these emissions.

The 2020 World Climate Conference in Glasgow (COP26) showed that, for our next generations to continue enjoying the basic essentials of life, there must be a drastic reduction in greenhouse gas (GHG) emissions. Therefore, SBB is aiming to reduce its direct CO2 emissions (Scope 1 and Scope 2) by 50 per cent relative to 2018 levels by 2030. And by 2040, there is to be a reduction of over 90 per cent. According to SBB’s current strategy, GHG emission reduction is to be achieved by systematically converting to renewable energies in four areas:

By 2040, those rail vehicles and construction site generators that currently run on diesel will be converted to emission-free drive systems (battery or hydrogen-powered systems, etc.) or will be replaced by new climate-friendly vehicles and generators. It is highly likely that shunting locomotives and construction service tractors will be fitted with battery-electric drive systems; due to the high degree of efficiency from direct energy storage and electric drives, their lifecycle costs will be the lowest in the SBB operating environment.

SBB’s fleet of around 2,300 road vehicles is being gradually electrified; at the same time, the charging infrastructure at company locations is being expanded.

Some 7,400 points heating systems are needed to ensure reliable cold weather operation; of these, around 2,600 are heated by propane or natural gas. By 2040, most of these heating systems will be converted to electricity, bringing several advantages in the longer term. An electric heating system, for example, applies the heat more precisely to the points, thus requiring less energy; there are fewer disruptions to services and availability increases. Converting systems to electric operation will be carried out as far as possible within the scope of existing projects and planned works.

Moreover, implementing these measures is not only good for the environment, but also makes economic sense. From 2030 onwards, less expensive energy prices, lower maintenance costs and higher energy efficiency will reduce operating costs by CHF 12-15 million annually compared to the status quo.

Ecological comparison of emissions and energy demand for the transport of one person over 100 kilometres by car, train and electric car (100pkm). Typical load factors of the  different means of transport were taken into account. Credit: www.mobitool.ch

The challenges of saying goodbye

SBB has suffered severe financial losses due to the coronavirus pandemic; the resultant pressure to save money is jeopardising the investment needed to implement the aforementioned measures. Additionally, in June 2021, the Swiss population narrowly rejected a tightening of the CO2 law; this led to uncertainty among various opinion leaders about further commitment. As a consequence, the costs and benefits of each individual measure were quite deliberately recorded in detail and clearly illustrated as part of an overall economic efficiency calculation. Due to the lower operating costs, the measures were found to be cost covering overall in the period up to 2040.

Although the rail network in Switzerland is largely electrified, SBB still spends almost CHF 30 million every year on fossil fuels.

The additional battery-electric locomotives pose new technical challenges for SBB’s own power grid. There is a risk that the traction current grid could be overloaded if charging processes are unmonitored. This is where SBB can benefit from the fact that it has already been operating an innovative load management system for several years. In the event of extreme load peaks in the traction current network, this fully automatic system switches off traction unit and points heating systems for a few seconds. In the future, load management will be extended to battery‑electric vehicles. At the same time, central charge management opens possibilities for employing battery capacities in a way that best serves the grid as well as being energy efficient. This, in turn, will help to reduce overall system costs.

Other challenges are the changes to workflows, processes and knowledge transfer caused by technology changes. For example, battery‑electric shunting locomotive operatives must now proactively raise or lower the pantograph when changing to track sections without overhead contact lines. Or, when planning vehicle availability, the charge status must now be explicitly considered. So, in addition to the purely technological aspects, the requirements to be met by personnel must be given a very high priority right from the start of the various transformation projects. Maintenance staff and those employed on construction sites must also be prepared for changes to systems at an early stage. 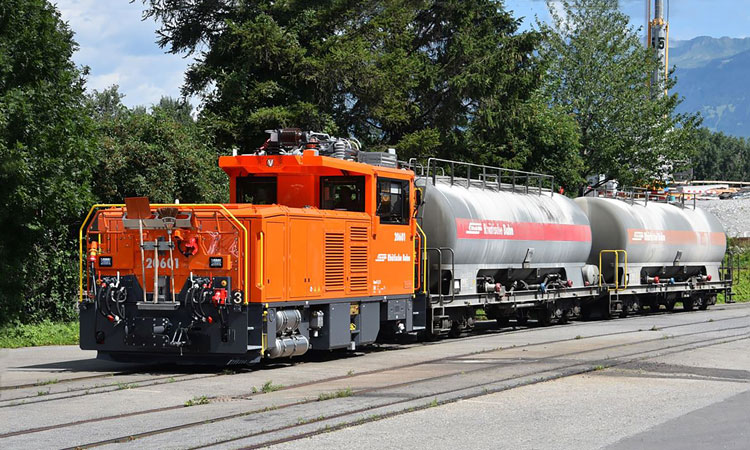 However, changes to systems are not only important for the core business, but also for the suppliers. According to estimates, construction machines hired for use on construction sites emit around 60,000 tonnes of CO2 annually. But here, too, electrification offers many opportunities – new products are constantly coming onto the market. For example, a hybrid tamping machine has been available since 2016; and greater use is being made of electrically powered small equipment items such as tampers, sleeper drills and rail saws. In its discussions with suppliers and by including relevant requirements in its tenders, SBB is also gradually pushing ahead with electrification on construction sites.

The time is ripe for a second system change It was with great foresight that our forefathers pushed ahead with railway electrification a good 100 years ago; today, the overhead contact line, hydroelectric power stations and substations are, as a matter of course, integral elements of the Swiss railway system. Now the second big system change is beginning: in the future, practically no railway applications will need natural gas, heating oil or diesel. The alternative technologies are cheaper to maintain and operate, do not emit GHG and, because they are quieter and emit fewer pollutants, there are clear health benefits for our employees.

Matthias Tuchschmid obtained an MSc in Environmental Sciences from ETH Zurich. He acquired his professional experience in the areas of energy systems, lifecycle analysis and sustainability strategy as a consultant at the German Corporation for International Cooperation and in the railway sector. He has been Head of SBB’s Energy Saving Programme since 2019. 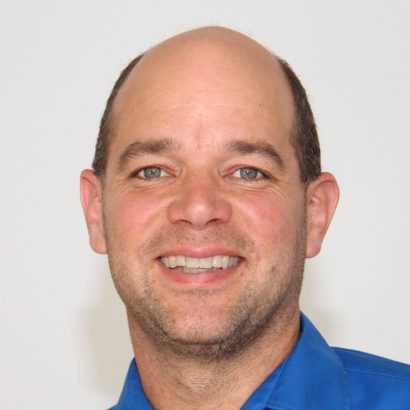