Connected vehicles are becoming commonplace on the road and are increasingly moving towards more automation. In 2017, the SNCF Innovation and Research Department developed a project to transform level crossings into a crossroads connected with road vehicles. Building upon the results of this project, SNCF started a new challenge in partnership with Valeo. Virginie Taillandier, Project Manager of Connected Level Crossings at SNCF, explores how this partnership is working to prepare and secure level crossings for the advent of autonomous and automated vehicles. 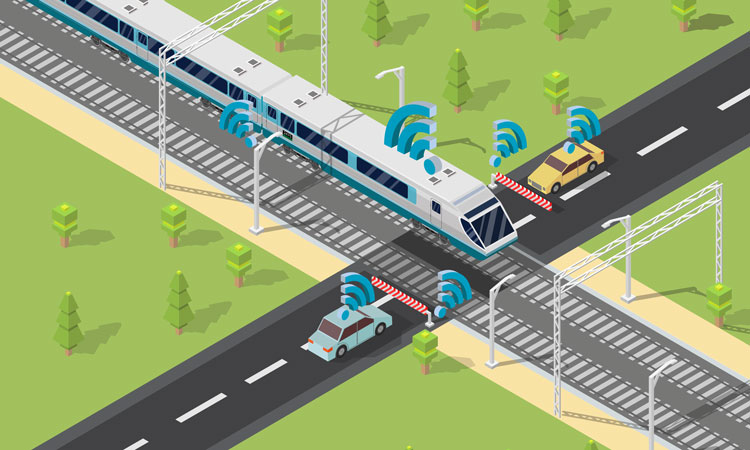 While autonomous or automated vehicles may seem in the realm of science fiction, many cars, such as Tesla vehicles, are already offering a first level of automation that allow drivers to delegate control of speed and direction. Currently, drivers must still monitor the environment and regain control if necessary. However, several car manufacturers have announced the upcoming release of vehicles offering a greater range of automation, which will allow the car to analyse its surroundings and act accordingly.

A level crossing is an intersection between a railway and a road. 99 per cent of accidents at level crossings are due to a violation of traffic rules; it is the third leading cause of railway fatalities.

In 2017, SNCF’s Innovation and Research Department launched a technological renewal project to transform the level crossing into a crossroads connected with road vehicles. In 2018, the development of a prototype demonstrated that level crossings can play a key role in the Cooperative Intelligent Transport System (C-ITS) ecosystem.

In 2019, SNCF joined the C-Roads project as an associated partner. The level crossing was integrated into the C-ITS architecture (see Figure 1) with hybrid communication in 5G (Wi-Fi) and 4G (cellular). The goal was to send messages on the level crossing status (closed, open, works in progress, out of order) and its characteristics (limitation of height, width, weight, speed or ground) to vehicles (V2X).

Validation tests were carried out in 2019 and 2020 on a level crossing located in Brittany including the national and European partners of the C-Roads project. 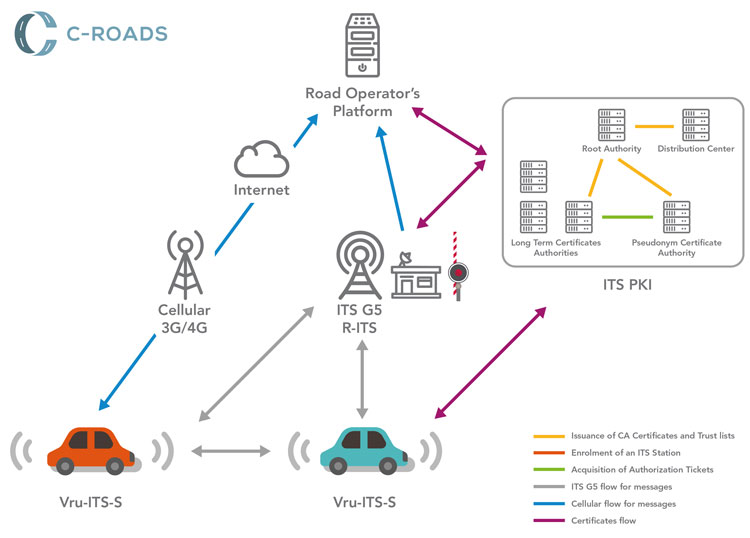 What is an autonomous vehicle?

An autonomous vehicle is a road vehicle able to drive without the active intervention of a human being, due to numerous sensors and to a software system of calculation or on-board artificial intelligence. The Society of Automotive Engineers (SAE) has declared there to be six levels of automation.

For a few years, road regulation began to change in the world. At the end of 2020, the Japanese authorities authorised the Honda Legend 3 for the market, it had had autonomous driving level 3. Through the recent ordinances of the mobility law, published in April 2021, France became the first European country to adapt the road and transport codes to allow the circulation on the road of autonomous and automated vehicles from September 2022, as long as vehicles are approved.

In the HERMES project we chose to focus on levels 3 and 4.

The project began in 2020 by producing a taxonomy of level crossings in France, i.e., describing the equipment and their characteristics, allowing the autonomous/automated vehicles to identify a level crossing (signs, lights, barriers), as well as the existing road configurations. Thus, from these elements, the autonomous vehicle can distinguish what it encounters on its road.

An initial Preliminary Hazard Analysis (PHA) has been conducted to identify the hazardous behaviours of the automated driving system ADS (called undesired events).

Then three different types of dependability studies have been done in parallel: a functional safety study, a safety of the intended functionality (SOTIF) study and a cyber-security study. The goals were to identify and evaluate risks due to hazardous behaviours of the ADS caused by (respectively) random hardware failures, performance limitations, cyber-attacks/malicious human behaviours and to define countermeasures that allow to reduce such risks at a reasonable level. A focus was done in this project on the hazardous behaviours due to dysfunctions of the ADS perception of road and level crossing. The methodology framework used for these three studies are based on (respectively) ISO 26262, ISO 21448 and ISO 21434.

A conciliation phase was then carried out between the three types of countermeasures, to ensure that they were consistent/not contradictory/complementary between each other.

The demonstrations took place in 2021 at the level crossing n°449 in Brec’h (in Brittany, France), which is an active level crossing equipped with flashing lights and two half-barriers.

The automated vehicle was also equipped with V2X connectivity (see Figure 2) and could particularly detect the level crossing by using its exteroceptive sensors (e.g., camera) and a digital map in addition of such V2X link.

During the demonstrations, several scenarios were carried out to test the nominal modes and degraded modes of the two systems, including:

The target scenarios have been fulfilled by the automated vehicle, with the expected performance in terms of functionality and safety (i.e. no hazardous behaviour). In particular, the assistance brought by the level crossing, via the V2X communication link, turns out to be especially useful to ensure the redundancy of the level crossing perception. 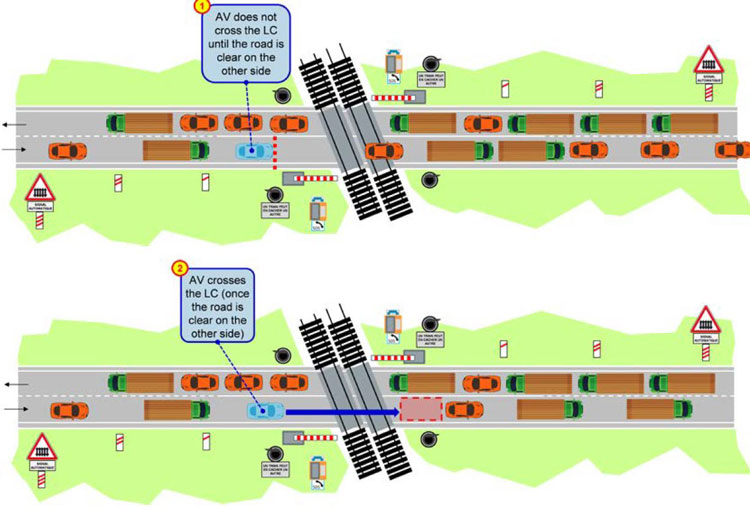 These tests enabled us to validate the various assumptions made between SNCF and Valeo, particularly in terms of functional safety and cyber-security.

The challenges for SNCF consist of achieving the standardisation at European level of level crossing use cases but also in creating the criteria capacity of vehicles to cross a level crossing in the approval of autonomous/automated vehicles.

This is a new opportunity for SNCF to shine internationally beyond its rail perimeter so that the subject of level crossing safety is considered by the automotive and road sectors.

Virginie Taillandier has a master’s degree in marketing. She has overseen the Tech4Rail Level Crossing project in the Innovation and Research Department of SNCF since 2017. She has been a national level crossing expert for five years at the Safety and Security Department of SNCF Réseau. She started her career in 2015 in the rail transport sector and worked at different positions related to security and safety at RATP (Parisian Metro and Suburban transport). She also worked in the domain of information systems in the car industry in 2010. 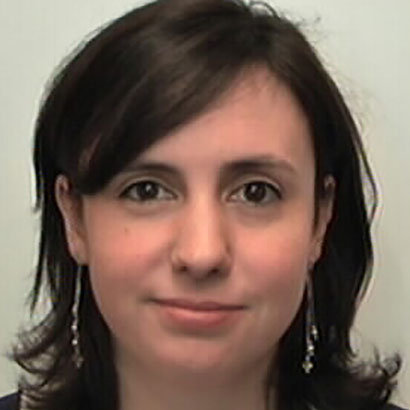