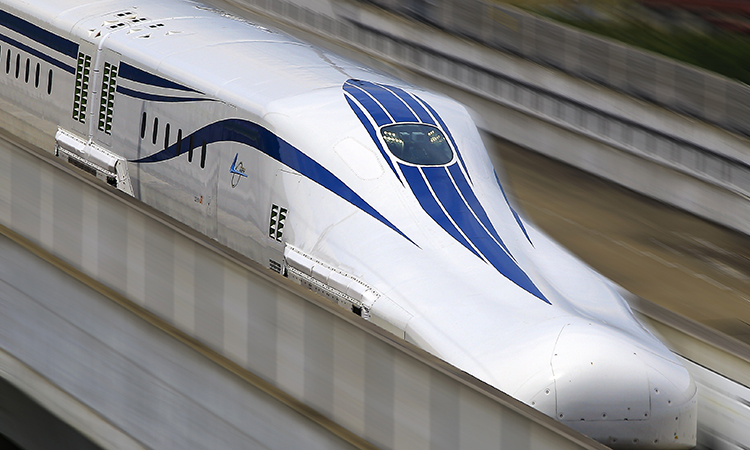 While magnetic levitation (Maglev) is a marvel of engineering, superconducting maglev (SCMAGLEV) technology is the future; it could revolutionise transportation in both Japan and the Northeast Corridor of the United States (U.S.).

Bringing the SCMAGLEV to the U.S. is a unique opportunity to raise industry safety standards for rail companies in North America.

Baltimore-Washington Rapid Rail (BWRR) and Northeast Maglev are working closely with Central Japan Railway (JRC), technology developer and owner/operator of both the Tokaido Shinkansen bullet train and the state-of-the-art Chuo Shinkansen SCMAGLEV, to bring the next generation SCMAGLEV train system to the U.S. This decade long relationship with JRC has provided BWRR with the necessary technology information, design expertise, strategies and safety culture that has resulted in an unparalleled 57-year history of safety excellence for the Tokaido Shinkansen. When combined with the proven systems that enhance safety, accuracy and reliability, the introduction of SCMAGLEV transportation to the U.S. will be revolutionary.

Bringing the SCMAGLEV to the U.S. is a unique opportunity to raise industry safety standards for rail companies in North America. BWRR is in an enviable position, since we are using JRC’s best practices and technology, we will introduce techniques and operations to the U.S. that have already proven effective elsewhere. There has never been a passenger fatality on the Tokaido Shinkansen (which travels at 285km/h) since operations commenced in 1964, despite carrying 150,000,000 passengers a year, nor on the SCMAGLEV system (Yamanashi Maglev Line) since inception in 1998. Weaving safety into every aspect of operations has been critical to their unparalleled safety record. A U.S. SCMAGLEV system would meet these same stringent safety standards, while whisking passengers between cities of the Northeast Corridor on trains that are moving at 500km/h and can depart every 10 minutes.

There has never been a passenger fatality on the Tokaido Shinkansen (which travels at 285km/h) since operations commenced in 1964, despite carrying 150,000,000 passengers a year.

BWRR will operate on the principal that the only acceptable accident is the one that never happens. Our primary safety objective when deploying the SCMAGLEV system and its infrastructure is to eliminate as many external risks to safety as possible. Prioritising accident avoidance is a fundamental change in thinking from the establishment of legacy rail systems in the U.S., which largely based their safety designs on the assumption that some crashes and derailments are unavoidable. This led to prioritising crash survivability rather than crash avoidance. Within the Tokaido Shinkansen and SCMAGLEV systems, there are multiple layers of safety measures, redundancies and fail-safes in place to ensure all possible measures are taken to prevent an accident from happening. This has resulted in an unparalleled safety record for the Tokaido Shinkansen and SCMAGLEV systems, and a set of proven safety practices BWRR intends to adopt.

One of the impressive things about the SCMAGLEV is that its design inherently eliminates several safety challenges that traditional trains face. Because the SCMAGLEV sits in a U-shaped guideway, there is no wheel-rail interaction, and no risk of derailment. The physics of the magnetic forces, acting between the vehicle and the guideway, keep the vehicle levitated and centered. This mechanism of magnetic levitation and guidance requires no active control or power, and naturally dictates that there is no chance for derailment. 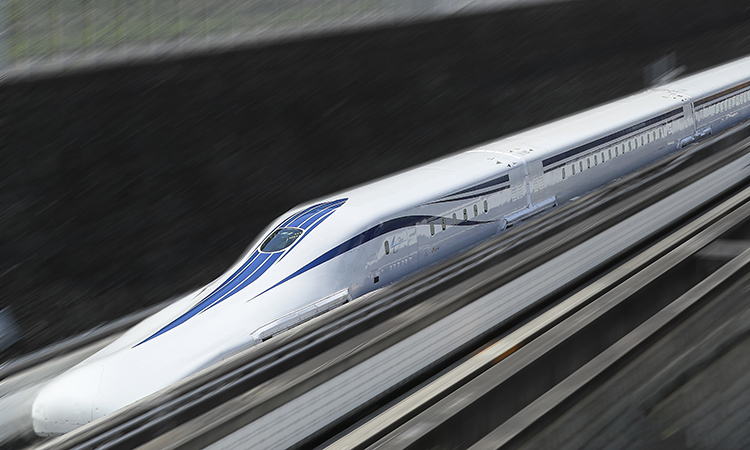 Like the Tokaido Shinkansen, the SCMAGLEV employs dedicated rights-of-way that are fully grade separated from other modes of transportation. In fact, the proposed alignment for the first leg of the SCMAGLEV between Washington, DC and Baltimore, Maryland is approximately 70 per cent in tunnel and 30 per cent on elevated guideway. Therefore, automobiles, pedestrians, animals, and non-SCMAGLEV trains cannot enter the guideway, and access to the guideway is strictly controlled.

SCMAGLEV technology uses a safety supervising system called the Safety Control System (SCS). The SCS is a fail-safe system that controls the train and ground facilities. It avoids hazards like train-to-train collisions, over-speeding, movements to a work zone, or movements through a switch in an improper position.

In addition to the SCS, the SCMAGLEV also includes various fail-safes and redundancies to ensure safety. For example, the SCMAGLEV is equipped with various braking systems. During normal operation, it uses a regenerative brake to stop the train. There are also backup brakes, such as wheel disc brakes and aerodynamic brakes should the primary braking system fail. 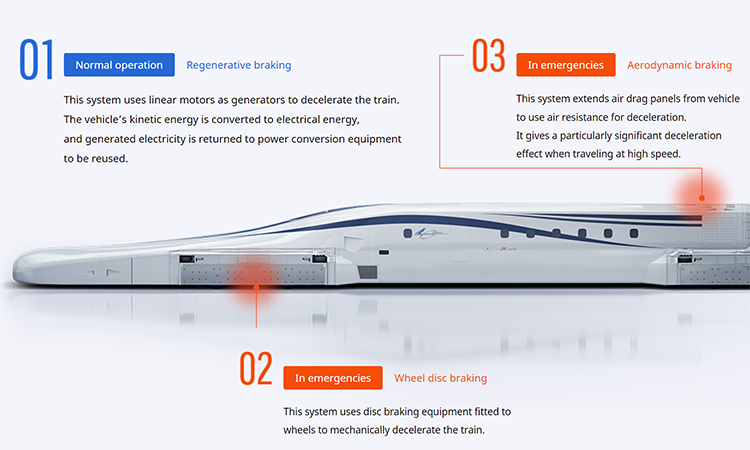 The SCMAGLEV is equipped with various braking systems. Credit: Courtesy of JR Tokai

While such technologies, procedures, and precautions are crucial pieces of the safety puzzle, it all comes down to training highly skilled workers to live with a mindset of safety. Trained and engaged personnel are the ones who can ensure the systems operate reliably and safely, day in and day out. Both JRC and BWRR consider personnel training as the most crucial aspect of safety. Famously, Japanese rail operators established shisa kanko, or point and call, as a standard safety practice. It has been adopted by rail operators in several Asian countries and in Canada. It is a highly effective communication tool that has been shown to cause an 85 per cent drop in workplace errors. We fully intend to bring these best practices and culture of safety to the northeast SCMAGLEV project.

A 2018 analysis by the Federal Railroad Administration (FRA)-backed Fatality Analysis of Maintenance-of-way Employees and Signalmen (FAMES) Committee found that the deadliest time of day for railway track maintenance workers is between 13:00-14:00. The same committee released a February 2022 report showing that most fatal striking accidents involving maintenance workers also involved trains (not maintenance vehicles). Furthermore, the workers who were struck likely were not able to hear alerts of a coming train due to the noise of the maintenance machines. These tragic fatalities are fully preventable, and we are committed to ensuring the safest possible conditions for our maintenance workers. For SCMAGLEV trains, maintenance only occurs when all passenger service has ceased for the day and is, in fact, prohibited during hours when passenger service is operational.

A paradigm shift in rail safety

The introduction of the SCMAGLEV to the Northeast Corridor will set a new U.S. safety standard. In FY2020, the Tokaido Shinkansen had 378 departures and carried 458,000 passengers daily, all whilst maintaining JRC’s stellar safety record. In comparison, the Acela Express moves just 10,000 passengers and sadly reported passenger injury incidents. FRA statistics indicate that there were 8,363 accidents on U.S. railways in 2021 alone. While not all of these caused serious injuries or fatalities, we believe a paradigm shift in how we think about rail safety can be achieved through investment in new technology. The public should expect more, and by bringing the SCMAGLEV to the U.S., BWRR will not only incorporate the most advanced high-speed train technology, but will also levitate the bar as we set new standards for operational safety that will benefit all rail operators, workers and passengers.

Wayne Rogers is Chairman and CEO of The Northeast Maglev, LLC (TNEM) and has extensive professional experience in engineering, construction, finance, and development. As a leading development expert, Wayne has testified before Congress and spoken at many national and international conferences. Wayne received a Bachelor of Science degree from the United States Naval Academy, a Master’s in Business Administration from Southern Illinois University, and earned his Juris Doctor from Georgetown University. He is a Member of the Bar of Maryland, Hawaii, and the District of Columbia. Photo courtesy of Baltimore-Washington Rapid Rail. 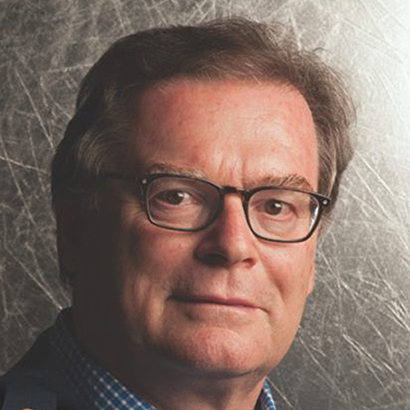