Grigore Havarneanu, Senior Research Advisor at the International Union of Railways (UIC), looks at the challenges that railways face in dealing with Chemical, Biological, Radiological, Nuclear, and explosive (CBRNe) attacks and how the EU-funded PROACTIVE project can help railway staff to better face these threats. 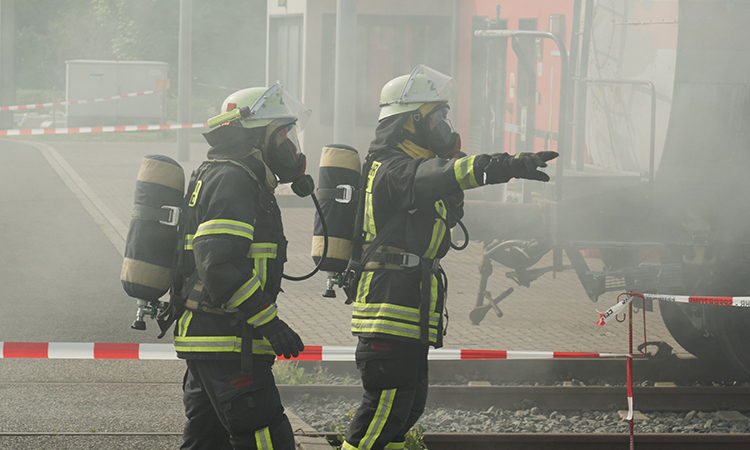 Railway premises and rolling stock are acknowledged as being soft targets for terrorism and have already experienced CBRNe (Chemical, Biological, Radiological, Nuclear, and explosive) attacks. The most iconic historical example of CBRNe is the 1995 Tokyo metro attacks where Sarin gas was used to attack commuters. In line with the EUROPOL reports, the wilful use of CBRNe agents in public spaces is a growing threat today and in 2018 alone, three terrorist plots involving biological ricin-based weapons were disrupted in the European Union (EU).

Beyond the variety of malicious CBRNe scenarios which could occur at railway stations or on a passenger train, the railway sector is also vulnerable to accidents involving a freight train carrying hazardous materials, or the sabotage of a train transporting dangerous goods.

The use of CBRNe agents in criminal or terrorist activities are raising important challenges because these materials are hard to detect, the consequences of exposure are often unknown, and there is the possibility of delayed effects of contamination. Certain characteristics of the railway environment are particularly conducive to the use of such agents. For example, the prevalence of closed spaces, underground platforms, ventilation systems and the large number of people present at stations and onboard trains means that CBRNe agents would be easily spread. Beyond the variety of malicious CBRNe scenarios which could occur at railway stations or on a passenger train, the railway sector is also vulnerable to accidents involving a freight train carrying hazardous materials, or the sabotage of a train transporting dangerous goods. 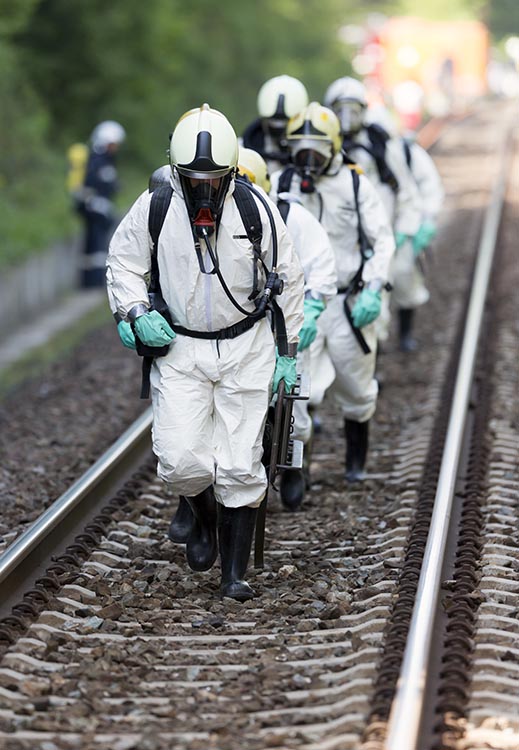 In the context of the Horizon 2020 PROACTIVE project (PReparedness against CBRNe threats through cOmmon Approaches between security praCTItioners and the VulnerablE civil society), we conducted a study to investigate the overall level of preparedness of railway and public transport operators against CBRNe events. We were interested in the sector’s own views on preparedness, but also those of specialised first responders (e.g., law enforcement agencies, firefighters, emergency medical services, etc.) who are tasked with the responsibility of responding to such crises. This allowed us to better understand the important role that the transportation sector plays in CBRNe crises management, as well as identify the possible transferrable lessons and highlight the potential areas for improvement in the railway sector.

Therefore, we ran two surveys: one with 223 first responders, and one with 30 rail companies. The questions examined the following six different dimensions which make up preparedness against CBRNe events:

The survey results allowed us to identify five areas where railway staff could develop or improve their skills and thereby increase overall preparedness.

Railway and public transport operators should understand the likelihood and impact of CBRNe threats, and everyone in the company should know what such an incident means.

The first preparedness element for railway staff is to acquire basic knowledge about the specific characteristics of a CBRNe threat and the challenges that it brings compared to other incidents (e.g., complexity related to contamination, decontamination, unfamiliar procedures, unfamiliar protective equipment, etc.). Railway and public transport operators should understand the likelihood and impact of CBRNe threats, and everyone in the company should know what such an incident means.

The second preparedness element for railway staff is to obtain a basic set of core skills for the response phase, while keeping in mind that they are not meant to become highly specialised emergency responders. This can include a basic list of do’s and don’ts for a potentially contaminated area until the official response measures are put in place. Examples include communication with the affected citizens who are on the railway premises, basic isolation or evacuation procedures in a railway environment, an emergency liaison with first responder organisations, etc. Railway staff must also consider the possible reactions and needs of affected individuals to a CBRNe incident. In the case of a railway CBRNe attack, the railway staff will be the first practitioners on site and their first actions can be crucial in determining how the public will react during the rest of the crisis.

Railway personnel are important partners in the management of CBRNe incidents due to their knowledge of the local peculiarities such as the railway infrastructure, station premises, etc.

The third element of an effective CBRNe preparedness is the railway organisations developing formal cooperation with a variety of specialised responder organisations and co-organising or participating in joint multi-disciplinary training exercises on CBRNe. Railway personnel are important partners in the management of CBRNe incidents due to their knowledge of the local peculiarities such as the railway infrastructure, station premises, etc. Joint trainings would help railway staff acquire essential response capacities and to be ready to support members of the public and the CBRNe first responders when an incident occurs on railway premises. The rail security and frontline staff should have a good understanding of the responders’ standard operational procedures.

The fourth element of an effective CBRNe preparedness is to develop pre-incident public information materials that are in line with the overall risk communication strategy of the national or local first responders and authorities. These can be used both inside the rail organisation to increase awareness of all railway employees, and outside when communicating to the railway customers and passengers. While our results suggest that the overall level of CBRNe awareness among railway company staff is quite low, a CBRNe scenario should not be a taboo subject. In order to achieve a good level of preparedness and response, all railway staff and the members of the public (i.e., railway passengers) should be informed about CBRNe challenges prior to an incident. 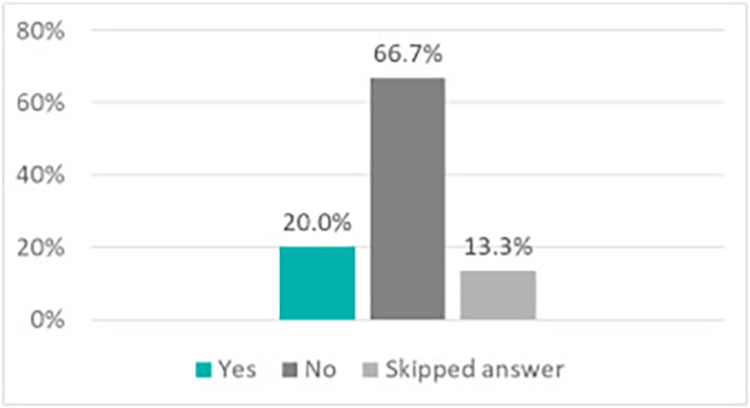 Statistics of railway companies with a public communication strategy for a CBRNe incident. Chart taken from the original scientific paper.
Credit: UIC

Communicating to the public

…railway staff should learn how to provide simple, accessible, and reliable instructions during the crisis and contribute to the understanding of the threat and response procedures, so that citizens can follow them easier.

The fifth element of a successful CBRNe preparedness strategy is to prepare both national authorities and railway staff to communicate to the public in an effective way during a major crisis, for example, via a spokesperson specialised in crisis communication or through a coherent and well-established social media communication strategy. Crisis communication takes on an even higher level of importance during CBRNe incidents as citizens have very little knowledge and thus highly rely on information provided by responding bodies; effective communication has been shown to improve public compliance with the unusual measures required of CBRNe response. This means that railway staff should learn how to provide simple, accessible, and reliable instructions during the crisis and contribute to the understanding of the threat and response procedures, so that citizens can follow them easier. Improvements to this fifth element might be the most crucial, as our study revealed an important communication gap with the public.

The PROACTIVE project has received funding from the European Union’s Horizon 2020 research and innovation programme under grant agreement no. 832981.

Grigore Havarneanu (PhD) is a Traffic and Transport Psychologist with international experience as researcher, project manager and lecturer. He is currently Senior Research Advisor at the International Union of Railways (UIC), where he is involved in European research projects and leads EU-funded project proposals within the Security Division. He coordinates the PROACTIVE project and conducts applied psychology and human factors research to improve the safety, security, and resilience of land transport. 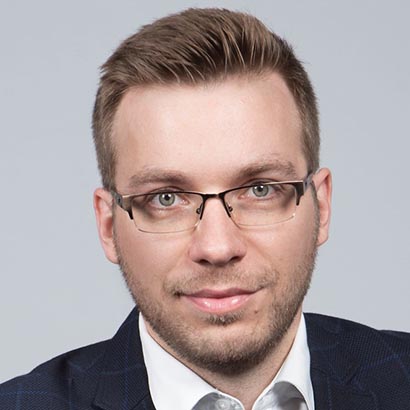