Slovenia: Successful infrastructure is vital for a successful economy

The railway has a long tradition in Slovenia. The first train arrived in 1846 and brought with it industrial development, new posts and overall progress. Nearly 170 years later, Slovenske železnice (SŽ/Slovenian Railways) are still a vital link in the Slovenian logistical chain, an indispensable part of public passenger transport, the largest exporter of services, and the largest logistical company in Slovenia. 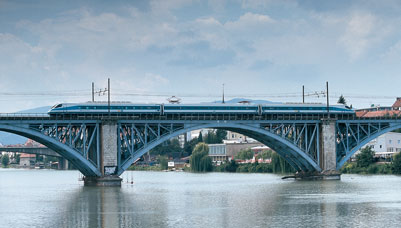 In the last few years we have had to cope with numerous challenges set in front of us by the economic recession and the liberalisation of the European rail freight market. Our cargo does more than 90% of its business in cross-border transport and is thus closely dependent on conditions on the European and world markets. The decline in the industrial production over recent years has primarily affected industrial branches which are among the most frequent users of rail transports. On the other side of the spectrum, our passenger company has also been struggling to gain new ground. As is true also of other European operators, we have been faced by the increasing competition of low-cost airlines and with the services of smaller, flexible road carriers.

It is clear that Slovenian and European railways face many challenges and we are therefore continuously adjusting our services to the expectations of our clients. This is accompanied by a strict rationalisation of our company, which allows us to offer our users competitive prices. By combining various measures (revenues and costs) we have managed to significantly improve our net profit. In 2013, the SŽ Group achieved €500 million of operating revenues, which is about 10% more than in 2012. We have also significantly increased our net profit, which reached €13 million. In the difficult circumstances which still pervade the Slovenian economy, this is, I am convinced, a great achievement that we can be proud of.

We brought about these achievements primarily by focusing our urgent measures on setting-up an efficient organisational structure and a consistent cost reduction, as it was quickly clear that we would not be able to rely solely on growing revenues. An important step on this path was the deal with the unions of all the companies, according to which our employees have for the last two years given up part of their pay and some other rights. The negotiations with the traditionally strong unions were long and hard, and I am glad to say that finally we managed to find common ground for the good of our group.

In the last two years we have also thoroughly changed the organisation of our company, in accordance with the EU legislation. The once integrated company was transformed in 2011 into a state-owned holding company which now manages the cargo, passenger transport, infrastructure, maintenance and traction companies, plus other subsidiaries.

An important part of our striving towards a more modern, effective and competitive SŽ was a thorough structural simplification of all the companies, which are part of the SŽ Group, in 2012. With it, we massively reduced the number of organisational units from 216 to 40 and significantly reduced the number of managerial posts. In 2013 we continued by centralising strategic support functions. With these changes and the resulting reductions in the number of employees we made a big step towards achieving our goal – setting-up a lean, dynamical and cost-effective SŽ Group.

We have also been making many efforts on the side of the revenues and in 2013 we managed to achieve good results. Both in our cargo and passenger companies we exceeded our financial expectations, and also transported more cargo and passengers than planned, and more than in 2012. In this way we continued the upward trends in our cargo company of the last five years.

I am especially pleased that by working to an active marketing approach we managed to increase the net sales revenues of SŽ Cargo, in spite of foreign competitors. Our future goal is to at least keep our cargo’s market share. We will continue developing new products, logistics and other additional activities by cooperating closely with our business partners. We will increasingly internationalise our business and strive to strengthen our position on international markets, which account for more than 90% of our cargo. The strategic cooperation with the Port of Koper is especially important as it is one of the most important sources of our traffic flows.

For passenger traffic we will continue the refurbishment of our diesel motor units and passenger wagons in order to offer our passengers a new quality of travelling. We will actively participate in setting-up the integrated public passenger transport system in which we see the railway transport as the backbone of the national system.

Though we cannot complain about the scarcity of our plans, there is a big impending factor – the public railway infrastructure, owned by the state, is in poor condition. For the last 20 years Slovenia has been building highways and not making investments to improve the railway infrastructure. The outdated tracks directly influence the quality of our services as they make travel times longer and inadequate axle loads on various sections impede our cargo business. Furthermore, there is a section of our core track from the Port of Koper towards Hungary that is still not electrified.

It seems that the state – as the owner of the railway infrastructure – has, after many decades of its neglect, finally come to the conclusion that modern railway infrastructure is one of the foundations of a successful economy. There are currently a series of major investment works underway on our network. The renovation of the Grosuplje–Kočevje line will, after more than 40 years, again make it possible for passenger trains to run. Comprehensive modernisation and electrification is underway on the 109km-long Pragersko–Hodoš section. This is still the only section of the Pan-European Corridor V that is not electrified, and also part of the Rail Freight Corridor 5. After the works have been completed, trains will be able to run on the track with speeds of up to 160km/h.

Intensive works are also already in progress on the Koper–Divača line which links the Port of Koper with its hinterland. By reconstructing the Koper freight station, plus other stations, and by upgrading the supply of electricity, the track’s capacity will increase from 72 to 82 trains per day.

These aforementioned projects are extremely important, not just for our company, but for the entire Slovenian logistics sector. However, these projects are not enough. Plans for a second track between Koper and Divača have long been thought of. Its construction is without doubt Slovenia’s most important infrastructure project for the coming years. The average capacity of the single-track between the port and its hinterland is on average used more than 90%, on some days even considerably more. Maintenance on the track causes additional delays and costs which is not acceptable to our customers. The port’s cargo is increasing from year-to-year, and the same is true for its share in our cargo business. At the moment the transport of goods for the Port of Koper is about 60% of all our cargo. In spite of works already underway on the existing track, the construction of a second track is vital, as studies predict further increase of railway cargo flows between Koper and Divača.

Furthermore, we will have to eliminate other infrastructure bottlenecks which hinder our development. The Zidani Most–Maribor track should be upgraded to the D4 category, and this should be followed by upgrading the track between Maribor and Šentilj on the Austrian border. In the long-term a second track on this section will also be needed, as well as the second track on the Ljubljana–Jesenice section, with the connection to the airport. The state plans to invest more than €5 billion for railway infrastructure, and works are also planned on the port’s infrastructure.

The policy of the EU is clear – the railway infrastructure development is one of the cornerstones of all successful economies. I am convinced that decision-makers in Slovenia have also come to the conclusion that upgrades and construction of railway infrastructure are vital parts of encouraging the growth of the national economy.

I am firmly convinced that the railways in Europe and Slovenia have a bright future in front of them. For 2014 we plan further growth of transported goods and passengers. We also envisage expanding beyond our country’s borders and offering comprehensive cross-border logistical solutions. This will only be possible by close cooperation of all the operators in order to offer our clients competitive prices and schedules, door-to-door transport and one-stop-shop concepts. On the home front we will continue the optimisation of our system and strive to ensure all the urgent investments, together with the state as our owner. All the listed measures have only one goal – the satisfaction of our clients, which we will only be able to achieve by harmonising all shareholders in the logistical process and by providing top-notch quality of our services.

Dušan Mes joined Slovenske železnice in November 2011 as Member of the Management Board responsible for Transport. In March 2012 he was appointed as the company’s General Manager. He is an economist by education and before joining Slovenske železnice, Dušan worked in various companies, starting in financial departments and later on taking over posts of Finance Director and General Manager. He is also a Member of the Management Committee of the Community of European Railway and Infrastructure Companies (CER). 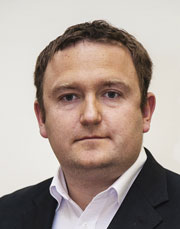