On 29 October 2013, an inauguration ceremony took place in Turkey to mark the opening of a rail tunnel beneath the Bosphorus, connecting the European and Asian sides of Istanbul. Part of the wider Marmaray Project, this rail connection is built 60m below sea level and is the world’s deepest immersed tube tunnel and constructed to withstand earthquakes…

As well as the undersea rail tunnel under the Bosphorus, the Marmaray Project consists of the modernisation of existing commuter lines between Halkalı-Yedikule on the European side and Söğütlüçekşme-Gebze on the Asian side, plus the procurement of new rolling stock to be operated along the route.

The rail tunnel underneath the Bosphorus is 13.6km-long and runs between Üsküdar on the Asian side and Sirkeci on the European side. Part of the crossing includes a 1.4km section of immersed earthquake-proof tube tunnel.

Services have initially opened for operation between Kazilicesme and Üsküdar. Once the rest of the project is completed, the line will ultimately run for 76.3km from Halkalı in the west to Gebze in the east, reducing the journey time from 1 hour and 45 minutes (by train and ferry) to 1 hour and 4 minutes. With a capacity of 75,000 passengers, one way per hour, the line is expected to carry one million passengers per day.

The most important benefits of the Marmaray Project include:

The idea to cross the Bosphorus via a rail tunnel beneath sea was first suggested by Sultan Abdülmecid in 1860s, but it was not until 1987 that the first comprehensive construction-feasibility study was made. And construction finally began in 2004.

The total length of the rail tunnel underneath the Bosphorus is 13.6km which includes a 9.8km-long bored tunnel, the 1.4km-long earthquake-proof immersed tube tunnel and a 2.4km-long cut-and-cover tunnel. The height of the immersed tube tunnel between Eminönü and Üsküdar is 8.75km and its width is 15.3km. It was assembled in 11 sections; eight at 135m-long, two at 98.5m-long and one at 110m-long.

In order to embed the immersed tube tunnel sections, a trench approximately 14m-high was excavated at the sea bottom. By using GPS, sonar and supersonic measurement equipment, the immersed tube tunnel sections (that were built in the dry docks of the Turkish Ministry of Transport, Maritime Affairs and Communications in Tuzla/Istanbul) were lowered into the trench at the same time in an extremely controlled and safe manner after soil improvement works, dredging of the trench and laying of the base materials were completed. When the ballast tanks of the tube tunnel sections were filled with water and became heavier, they were then immersed into the trench bed.

Five TBMs (Tunnel Boring Machines) were used in the Marmaray Project including four slurry-type TBMs used for excavating the tunnels between Yenikapı-Sirkeci and Üsküdar-Ayrılıkçeşmesi. For the tunnels bored beneath poor-bearing earth and the relatively thin upper layer between Yedikule and Yenikapı, an EPB TBM (Earth Pressure Balance- Tunnel Boring Machine) was used.

Istanbul is located some 20km away from the North Anatolian Fault Zone, which runs from east to west, south of Prince Islands in the Marmaray Sea. The project area is therefore in a location where the risk of a severe earthquake must be taken into account.

Therefore, geological, geotechnical, and geophysical investigations were made and the data obtained from these investigations, together with existing data, formed the basis for the design of the tunnel to be earthquake-resistant.

The immersed tunnel has been designed to withstand a 7.5 moment-magnitude earthquake. Even if the tunnel is flooded in the event of an earthquake greater than this, it will take 1.5 hours for the walkways to be submerged. If there is a train inside the tunnel when an earthquake strikes, then the passengers will be evacuated via both directions well within the 1.5 hour time limit and both sides of the tunnel will be closed automatically.

It has been targeted to achieve the following objectives in the event of an earthquake:

In the scope of the Marmaray Project, five new and modern stations including three underground stations – Üsküdar, Sirkeci and Yenikapı – and two above-ground stations – Ayrılıkçeşmesi and Kazlıçeşme – were constructed.

Throughout the station areas, passenger access is ensured by overpasses and underpasses in line with the position of the station – all designed with lifts and/or ramps and high-quality lighting in order for all passengers to access them comfortably. A minimum of one station access way has been designed to allow passengers with reduced mobility to enter the stations without needing help.

Ventilation in the underground stations is provided naturally where possible, and by forced ventilation where required in the case of negative conditions such as dust or smoke. In order to be protected from smoke in the emergency exit shafts, ventilation fans will keep the fire and smoke away from exit routes and stairs. In each station and ventilation building, there are 100kw electrical pumps and 175 HP diesel generator pumps which will be used as a water extinguishing system throughout stations and also within the tunnel. In case of a fire, turnstile systems will automatically open and escalators and elevators, which automatically head to the exit gates, will lead the passengers safely to the exit. In addition, there are technical rooms in each station which include passenger information (announcement, information monitors), ventilation, fire, CCTV, escalator control, lighting and SCADA systems.

Historical finds were uncovered during archaeological excavations on the construction sites at Üsküdar, Sirkeci and Yenikapı stations. Experts estimate that the ruins date back approximately 8,500 years. The wreckage of 13 vessels along with 35,000 historic findings that belong to the Ottoman, Byzantium and Roman ages were uncovered during excavations. In particular, the most wide-reaching archaeological excavations in the history of Istanbul were carried out in Yenikapı in four different sections over an area of 58,000m². Uncovered was the largest port of Byzantium – the Theodorius port.

Fifty-four train sets composed of five and 10 coaches have been procured to operate along the Marmaray route. Capable of operating at 105km/h, the vehicles will run at 80km/h on the Marmaray lines and will be equipped with air-conditioning, security cameras, fire warning systems plus visual and audio passenger information systems.

The Marmaray Operation Management System consists of five sections – the Supervisor Desk, the Traffic Controller Desk, the Communication Coordinator Desk, the Electromagnetic Systems Coordinator Desk and the Maintenance Desk – and they are able to monitor all stations with CCTV to track and command the power systems such as transformers and catenaries etc., to conduct passenger information systems and emergency operations. The operational responsibility of the Operation Management System is upon the Supervisor Traffic Controller, and train traffic is managed by the Traffic Controller.

A Communication Based Train Control (CBTC) System is applied in the section where the train traffic was launched. Through CBTC, the location of the trains and driving mode can be instantly monitored, all signals and switches are arranged remotely and signals are controlled automatically. ERTMS/ETCS Level 1 will be installed on the same lines when all lines are commissioned, making Marmaray the only example that uses two different systems – CBTC and ERTMS/ETCS Level 1 – on the same line. Both systems will be able to be operated separately; systems will give movement authorisation to the trains according to their occupancy.

Four minutes between Asia and Europe

With the opening of the Marmaray, the travel time between the two sides of Istanbul is now just four minutes. Construction was undertaken and completed by the General Directorate of Infrastructure Investment (AYGM) and then transferred to Turkish State Railways (TCDD) for commercial operations.

With the opening of Marmaray, a 153-year-old dream became reality, not just by connecting the two sides of Turkey, or even two continents, but it can also provide seamless railway transportation from Far Asia to Western Europe and even from Beijing to London.

Süleyman Karaman graduated from the Mechanical Engineering Faculty of Istanbul Technical University (ITU) in 1978. In 1981 he took his master degree at the same university and he received a Mechanical Engineer MSc title with high degree. Following this, Mr. Karaman carried out some studies concerning farming machinery, took up a short-term military post and worked for an automotive company. Then in 1994 he was appointed as Deputy Director General of IETT (Istanbul Public Transport Authority) where he took part in many projects – one of which was the implementation of Smart Tickets. Mr. Karaman became Director General and Chairman of the Board of Turkish State Railways (TCDD) in January 2003. 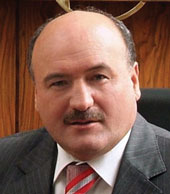 By Süleyman Karaman, Director General and Chairman of the Board, Turkish State Railways (TCDD)