Norway: The new Ulriken Tunnel – drill and blast or TBM?

The line between Arna and Bergen in Norway is one of the most heavily trafficked sections of single-track railway in Europe, with approximately 130 trains passing daily. This section is a bottleneck for rail traffic to and from the station and freight terminal in Bergen. The Norwegian National Rail Administration (Jernbaneverket) is currently carrying out a competitive tender procedure for the construction of the new Ulriken Tunnel between Arna and Bergen as part of the Arna–Bergen double-track project. Two alternative construction methods are envisaged: conventional drilling and blasting or the use of a tunnel boring machine (TBM). On the closing date for tenders at the end of February 2014, tenders had been received based on both methods, and the choice of method will be decided during the negotiations with the contractors. It is estimated that the total investment in the project will be NOK 3 420 million. Hans-Egil Larsen, Project Manager at Jernbaneverket provides more details.

More about the project

Essentially, the laying of double-tracks between Arna and Bergen comprises two projects: a new tunnel between Arna and Fløen, and a double-track from Fløen to Bergen with a new signalling and interlocking system. The new interlocking system at the station in Bergen will also have the capacity to control the station in Arna. In addition, the existing tunnel tube will be upgraded when the new tunnel is completed, and Arna station will be modified and upgraded.

The existing tunnel was completed in 1964. The Ulriken Tunnel is currently one of the most heavily trafficked sections of single-track line in Europe1. The project came about mainly because the current section between Arna and Bergen is a bottleneck that limits the capacity for passenger and goods traffic on the Bergen Line.

The travel time will not be significantly reduced as a result of the new tunnel. It is primarily intended to increase capacity, so that passengers will have more departures to choose from and will thereby have more flexible public transport services. The train takes eight minutes between the two stations – which is 15 minutes less than the journey would take by car or bus. The frequency of departures will be increased from two to four per hour, so that travellers will enjoy metro frequency between Arna and Bergen. In addition, having two tunnel bores reduces the vulnerability associated with only having one.

For goods traffic, the average time saved will be 10 minutes and the trains will also be more punctual. This will be possible since the goods trains will depart from a separate track. This could save as much as 30 minutes on some goods train departures.

The main concept for the double-track between Arna and Bergen is as follows:

Arna station will be modified and will have two tracks to a 350m-long platform for regional trains, and a 175m-long platform for local trains. The pedestrian underpasses will be altered and widened, and new ramps and new stairs will lead from the underpasses to the station and the platforms. Alterations will also be made to the station building among other things to meet universal design requirements.

The existing tunnel through Mount Ulriken has no evacuation routes. A second tunnel bore will substantially increase safety and cross passages will be established every 500m thereby enabling evacuation through either tunnel bore. The new tunnel will be built parallel to and south of the existing tunnel. From the Arna side, the first 1,000m of tunnel in the direction of Bergen will be an extension of two tracks at Arna station: the main track eastward and the dead-end track for local trains. Connections will be established between these tracks and the existing tunnel.

On the Fløen side, the project includes a new double-track bridge across Møllendalsveien road. Changes to the tracks means that alterations will also have to be made to the signalling system. When the development is completed, the signalling system for Bergen station will include the whole section to Arna.

More about the new Ulriken Tunnel

The open-air zone in Arna includes a rig area and a parking area. Barracks, office rig, a cleaning plant, etc. will be located in the rig area, and it will include the interface and portal of the construction tunnel. Temporary parking spaces for passengers will also be established here.

The Storelva River runs through a culvert under the station area and this culvert will be extended and upgraded. In the cutting for the new railway tunnel, the line will cross under the E16 highway and the FV237 county road, and a concrete culvert will be constructed under these roads. Road traffic will have to be re-routed during several phases of the construction work and other local road adjustments will be required.

The open-air zone in Fløen consists of several rig areas, with access to the main rig area from Møllendalsveien road. From the main rig area, a construction tunnel will be built to provide access to the railway tunnel, and the contractor will have to establish a plant for cleaning the water from the tunnelling process. Office rigs for the contractor and the client will also be built on this side of the tunnel.In Fløen, a new railway bridge will be built adjacent to the existing bridge. Later, when the new bridge and tunnel have been put into use, the existing bridge will be demolished and replaced by a new one.

The contract comprises an approximately 7,800m-long rail tunnel between the open-air zones, approximately 800m of which will have two tracks (three tracks in some places) with a single track through the rest of the tunnel.

The railway tunnels will typically have the following cross sections:

When subsequent works have been completed and cable conduits have been installed, the tunnel will be handed over to the railway-technical contract for superstructure and electrical works.

Fløen has some historical buildings that will have been dismantled in advance and these will need to be rebuilt under a separate contract once the new Ulriken Tunnel has been completed.

The scope of the project covers the following main works:

Widening of the water culvert in Storelva River will be needed, along with house demolitions, a new technical building, and the upgrading of tracks, station area and station building.

The biggest challenge for the project is that it is Norway’s first competitive tender for the construction of a transport tunnel with the option of using a TBM. We have therefore not had many corresponding reference projects to help us.

Another factor that creates a challenging framework for implementation of the project is that, as far as possible, ordinary train operations must continue as normal throughout the production phase. The construction work will take place close to existing infrastructure, and the section is heavily trafficked.

This will entail limitations and planning, particularly as regards the following:

In the event that conventional tunnelling is chosen, restrictions will apply as regards blasting times and maximum tremors. The plan is to have a maximum of three blasting windows for the tunnel to take account of train operations in the nearby existing tunnel. Inspections must also be carried out of the existing tunnel after each blast. Regardless of which construction method is chosen, some parts of the tunnel will have to be drilled and blasted, so that these restrictions will have to be complied with.

Storelva in Arna is a salmon river and this must be taken into account when work is carried out on extending the electrical culvert. The flood situation in this area must also be considered when planning the work.

We also face a technical challenge when building the passing loop inside the mountain on the Arna side.

Jernbaneverket will award the contract to the tenderer with the financially most favourable tender. The evaluation of tenders will be based on the following criteria and relative weighting:

A decision on the choice of method and contractor is expected by the end of April 2014. However, regardless of which solution is chosen in the end, it is good for Jernbaneverket to gain experience of how drill and blast construction compares with the use of a TBM.

Hans-Egil Larsen has a technical and commercial college education. He has more than 15 years of experience of the tunnelling sector and, since Novermber 2012, has served as Jernbaneverket’s Project Manager for the construction of a double-track between Arna and Bergen, including the new Ulriken Tunnel. 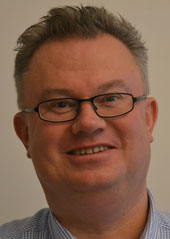