OV SAAL project: Working on improving accessibility in the Netherlands

The OV SAAL project in the Netherlands aims to expand the railway system around Schiphol, Amsterdam, Almere and Lelystad, but not without serious challenges with respect to technique and accessibility. Christiaan Caan and Koen Ingels both Managers from construction alliances on behalf of ProRail, and OV SAAL’s Senior Communications Consultant, Kitty l’Abee, provide further information about this huge project… 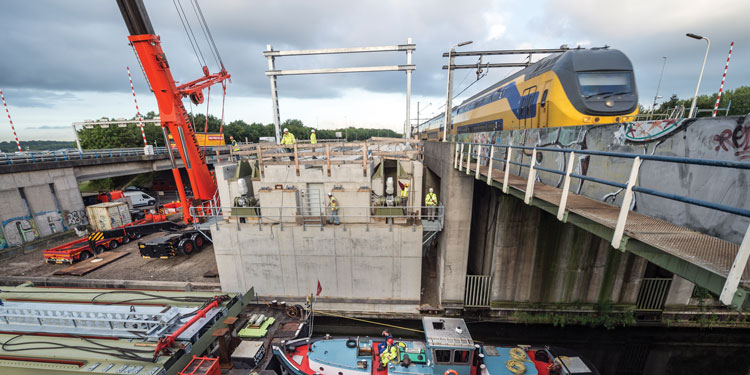 Some people might have forgotten (or some people may just not know) that Flevopolder is a relatively ‘new piece of land’. Its impoldering took place in the 1950s; the Amsterdam region outgrew its location and needed new space for building houses. Large areas were impoldered and cities, houses, motorways and railways were built.

Construction of the Afsluitdijk – a major causeway – was completed in 1932 and resulted in the separation between the North Sea and the Zuiderzee (a shallow bay). The Zuiderzee was from then re-named IJsselmeer. Subsequently, dykes were built which allowed the act of impoldering to start. From this, Eastern Flevoland was created in 1957, southern Flevoland in 1968 and the Province of Flevoland was founded in 1986. This resulted in greater possibilities for work, accommodation and recreation. This also meant there was a need for more transport.

The distance between Almere (Southern Flevoland) and Amsterdam is about 35km. Amsterdam did not stop growing either. The growth of Amsterdam does not only mean there are more houses; the metropolis of Amsterdam is of great economic interest to the Netherlands overall. More than half a million people travel daily from and to the metropolis region of Amsterdam. The number of households will increase in this region by about 270,000 until the year 2040. Particularly in these times it is also important to have an economic top position and even more so to maintain this.

These developments make a project like OV SAAL1 (public transport Schiphol, Amsterdam, Almere, Lelystad) necessary, and aims to increase the capacity of the existing railway network.

In our search for increase of capacity we were confronted with a few substantial problems. Space is scarce in the Netherlands. In former times, simply two extra railway tracks were built alongside existing ones, but now optimisation of the existing track has priority. Only when this is not sufficient, doubling the railway track is taken into consideration. The OV SAAL project reflects this way of thinking. For Amsterdam, apart from optimisation of the existing ones, two extra railway tracks are required. This section runs from Riekerpolder (near Schiphol airport) up to Duivendrecht Station.

For the section Weesp–Almere–Lelystad, the capacity increase is completely established through optimisation of the railway track itself; for instance by building tail tracks, by moving signals and by adjusting the layout of switches.

Apart from the capacity growth there are some less pleasant aspects for the immediate vicinity as well. More trains lead to more noise nuisance. This means that mitigation measures have to be taken along the entire track.

Amsterdam even has an extra problem. Working in the very densely built-on area on the south side of the city of Amsterdam is like working on an overcrowded spot. Viaducts and railway tracks must be fitted really closely into the space available. Working in this area means that this already overcrowded spot becomes even smaller because space is needed just for doing this work.

Rijkswaterstaat, the Netherlands’ highway network and waterway network manager, works on the same corridor (Schiphol–Amsterdam–Almere) on increasing the capacity for road traffic3. The works on the railway track and on the road have a lot in common. They are close together and cause hindrance on highways and railway tracks. The activities have a great impact on the vicinity and the underlying road network (especially in and around Amsterdam). Therefore we have opted for a joint approach with respect to smart planning and building, freer flow and less hindrance, communication and environmental management. All this together makes the Amsterdam element a unique challenge.

Between Riekerpolder and Duivendrecht Station on the Zuidtak (the railway track south of Amsterdam), two extra railway tracks covering almost 8km will be constructed. Riekerpolder is the junction of the Zuidtak southern section and the Westtak western section (Schiphol–Amsterdam Sloterdijk railway line). The Zuidtak is connected to the Amsterdam–Utrecht railway line at Duivendrecht Station.

Sixteen new viaducts are required for carrying the new railway tracks and two existing bridges will be modernised. The most prominent structural works are:

The construction work on the railway section Riekerpolder–Duivendrecht Station has been divided into two contracts. The division is at Amsterdam Zuid Station. The activities are carried out under two alliance contracts between ProRail and a market party. The alliances create the design, take care of the environmental management and act as delegated client for the contractors. The alliances have a risk fund for managing design risks, environmental risks and a number of client risks. The main task of the alliances is to optimise the design and (the preparation of) the performance of construction work. The incentive for the alliances is that at the end of the work the surplus of the alliance fund will be shared between the market parties and ProRail. 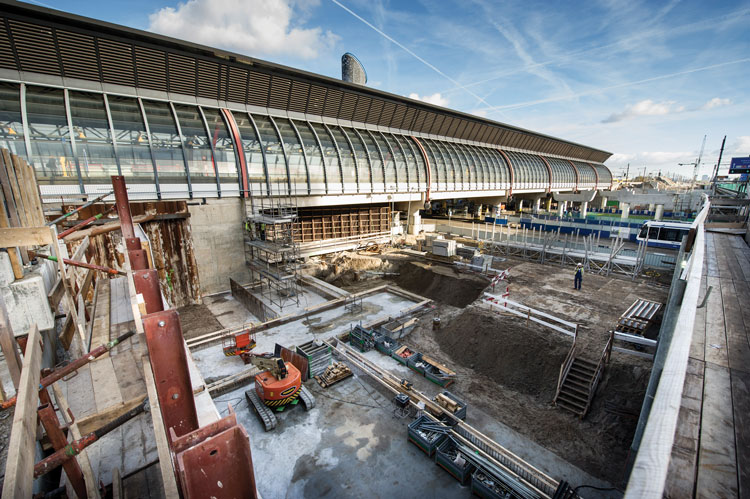 Amsterdam RAI receives an additional platform and a wider concourse.

The railway infrastructure will be adjusted at a number of locations between Weesp and Lelystad in order to increase the capacity. Noise mitigation measures limit the effects of the increase of the number of trains on this section. The works will be completed by the beginning of 2017.

Measures are required for limiting the noise disturbance for the vicinity caused by the increased railway traffic and bringing this within the standards again. Two versions have been worked out: 1) replace the existing ‘noisy’ π-beams of the bridges by so-called ‘quiet’ bridge beams; 2) adjust the existing π-beams with noise-limiting measures, such as lining the web plates with sound-proofing materials.

Although the initial construction costs are higher, the first version scores best in reducing the noise nuisance and in the LCC analysis (Life Cycle Cost). The profit is mainly in the future because of lower maintenance costs and less disturbance of the timetable. Based on these arguments, it was decided to replace the present bridge beams.

In the future, it will be possible to reach Almere Centrum by more trains and the railway traffic will be more intense than it presently is. Also trains can be positioned before the start of their service without hindering the exploitation of the continuing tracks.

For this the railway track configuration will be extended on the eastern side with two tail tracks for trains coming from Amsterdam. The trains can ‘turn long4’ here and the train driver can walk to the other side of the train using a service platform between the tail tracks. Four standard and four diamond crossover switches are required to reach these tail tracks. On the western side of the station the connection between the northern track and the middle track will be moved somewhat to the west. The switch layout will be adjusted so that ‘turn short5’ turning will be possible and that trains can enter the station at a higher speed.

Noise mitigation measures will be taken along the railway track and near the station. At the station the transparent panels used as noise barriers will be integrated into the existing station roof.

Noise barriers will be placed along the entire track at various places:

The heights will vary between 1m and a maximum of 6m (above track level) and the barriers will be placed about 4.75m from the centre of the railway track. Rail dampers will be installed near Almere Buiten Station.

Koen Ingels has been Alliance Manager on behalf of ProRail of the Amsterdamse WALTZ alliance since 2010. He is a civil engineer (University of Gent, Belgium, 1987) and has over 20 years of experience in the design and the implementation of multidisciplinary rail infrastructure projects in the Netherlands and abroad. Before he came to work with OV SAAL, he was – by order of ProRail – Project Manager for the engineering firm Movares responsible for the plan study, the design, the contracting and the guidance of the implementation of the entire reconstruction of the station area in Arnhem (2006–2009).

Christiaan Caan has been Alliance Manager on behalf of ProRail of the Amstelspoor alliance since 2010. He is a civil engineer (Delft University of Technology, 1996) and has over 15 years of experience in design, contracting and contract management in multidisciplinary rail infrastructure projects in the Netherlands. Before he came to work with OV SAAL, he worked for consulting company ARCADIS and was – by order of ProRail – Contract Manager and Rail Systems Engineer responsible for the plan study, the design, the contracting and the contract management of the Drontermeer Railway Tunnel in the Hanzelijn (2003–2010).

Kitty l’Abee has been Senior Communications Consultant to the OV SAAL project since 2012. Until 2017, the programme will be focused on five geographical areas of attention, being two areas at the southern border of Amsterdam, Weesp and another two in Almere. After 2017, the programme will switch to the medium-term vision that is now under development.