Success of financing rail infrastructure in Germany is now in its second round. The second Performance and Financing Agreement (Leistungs- und Finanzierungsvereinbarung, ‘LuFV II’) between the government of the Federal Republic of Germany and Deutsche Bahn AG (DB AG) was signed at the beginning of January 2015. The conclusion of this agreement is good news for both the rail industry and Germany as a business location in total. For Global Railway Review, Frank Sennhenn – CEO of DB Netz AG – explains that the new agreement provides planning and financial security for the existing tracks, stations and DB AG’s power systems for a further five years. At the same time, the conclusion of the LuFV II is the basis of the largest ever modernisation programme for Deutsche Bahn’s infrastructure… 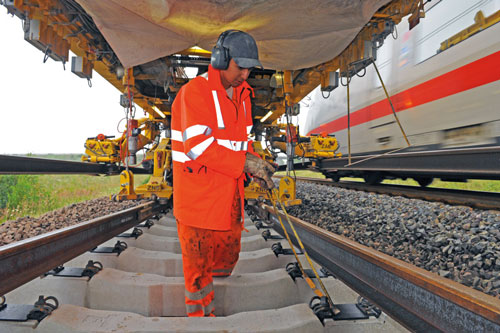 Between 2015 and 2019, both the German Federal Government and DB AG will be making more investments than ever before. Altogether, approximately €28 billion will be invested in the German rail infrastructure over the next five years. This is around €8 billion more than in the comparable period of the first Performance and Financing Agreement (Leistungs- und Finanzierungsvereinbarung, ‘LuFV I’).

The LuFV II thus forms the basis for the long-term reduction of the existing investment backlog in Europe’s largest rail network; 875 bridges alone are due to be replaced by 2019. Further funds will be invested in other aspects such as the maintenance and modernisation of many tunnels, signal boxes, platforms and points.

The significance and role of the Performance and Financing Agreement for the German rail infrastructure becomes clear just by glancing at the past efforts. Until 2008, the German Federal Government financed measures for the existing rail network on a yearly basis, using an input-oriented and time-consuming process based on extensive lists of (individual) infrastructure measures. This caused great bureaucratic efforts and not only resulted in an extremely slow implementation of projects for the existing network, but also meant that the assessment of the effectiveness of the funding was limited.

The German Federal Government and DB AG found a way out of this dilemma with the new financing and performance regime: the LuFV. The LuFV I was concluded on 1 January 2009 for an initial period of five years and was subsequently extended by one year in 2013. It contained binding stipulations regarding the German Federal Government’s infrastructure contribution (€2.5 billion per year) as well as regarding the minimum level of maintenance volume to be provided by the railway infrastructure undertakings (RIU).

A key factor of the new regime was to implement the principle of output control. Output control in this case means that the LuFV provides for a defined amount of funds over a given period and in return the authorities are able to measure the effectiveness of its investments based on agreed quality figures (e.g. the theoretical loss of travel time, the number of infrastructural defects, the functionality of railway tracks, the evaluation of system quality and the reliability of railway power).

As a result, the LuFV not only provided a reduction of administrative efforts but also helped to increase the number of infrastructure measures thanks to secured funding over several years. In return, the infrastructure companies provide detailed reports on the quality figures on a yearly basis. This created transparency for the German Federal Government as well as a high degree of planning and investment security for DB AG.

The now concluded LuFV II is based on the general structure of the LuFV I and can be seen as an enhancement of the LuFV I. Next to the increased level of funds, the main innovation of the LuFV II are new provisions on the financial system which ensures that the earnings from DB’s infrastructure companies will completely flow back into the infrastructure funds in future. This is ensured by means of the so-called ‘Financial circuit 2.0’. In this context, the earnings after tax from the railway infrastructure undertakings will be paid in full to the German Federal Government (as the shareholder of DB AG) as a component of DB AG’s dividends, meaning that they will then be provided to the existing network again. The figure below provides a simplified overview of the financial circuits after the implementation of the LuFV II.

The LuFV II and the corresponding largest ever modernisation programme for the German rail infrastructure also pose a big challenge for all parties involved. There are the sharpened quality targets for the infrastructure companies on the one hand. On the other hand the increased level of funding in turn also results in a significant rise in construction and maintenance activities to be planned and implemented in the upcoming years. For example the total amount of 875 bridges to be replaced between 2015 and 2019 is a significant increase compared to the approximately 120 bridges that have so far been replaced each year. In addition, for example, around 17,000km of track and approximately 8,700 points will be replaced by 2019. Further extensive repair work will also be involved. In peak times, work will be carried out on roughly 850 construction sites a day.

Such a volume requires correct and efficient planning. With all the complexity of the upcoming construction activities, ensuring the quality of everyday operations will clearly remain one of the key tasks. The top priority is to keep restrictions for passengers and the approximately 400 railway companies that use our network every day to a minimum despite the great deal of construction and infrastructural work. In doing so, we will try to simultaneously implement various measures in one section of the route as far as possible and thus reduce the number and duration of track closures caused by the construction work to a minimum. For this purpose, we will bundle the largest measures in special construction corridors. We have defined and planned over 80 corridors with roughly 500 individual measures for 2015 alone. Another key element as part of the plans is a construction timetable closely coordinated with all parties involved, which specifies the necessary diversions, extended travel times or replacement transport alongside the corridors.

The use of modern technology for the implementation of the construction work, the intensive planning and coordination of the construction work and interlinking with the timetable are essential. To aid with this, Deutsche Bahn has made corresponding investments in the past, for example, and now has modern machinery with over 100 large-scale machines to efficiently carry out infrastructural work. DB Netz AG is also relying on increased standardisation and industrialisation in maintenance work. The further development of process workflows in maintenance personnel’s everyday work using modern IT tools plays a key role here.

Another essential aspect for mastering the increased requirements for planning and carrying out the respective modernisation measures is the corresponding availability of qualified personnel. Therefore, DB AG will intensively recruit additional employees in the upcoming years. In addition, close consultation between DB AG and its partners from the industry will also take place simultaneously on an ongoing basis. This will ensure that the suppliers and construction companies can also plan and expand the necessary capacities to successfully conquer the upcoming challenges together.

The foundation of the largest modernisation programme in Germany’s rail infrastructure has been laid with the conclusion of the new LuFV II. Thanks to the agreed funding, the required volume and planning security will be guaranteed for the next five years in order to reduce the investment backlog in the rail network. This is particularly good news in light of the increasing intermodal competition rail companies face in Germany. DB Netz AG and the DB Group as a whole are therefore making intensive preparations to successfully implement the upcoming modernisation programme with the least possible impact on its customers.

Frank Sennhenn has been CEO of DB Netz AG since 1 May 2013. Prior to this, Frank was CEO of DB Regio AG from June 2009 to April 2013. Frank completed his degree in Business Administration at the University Erlangen-Nürnberg and started his career in an assistant position at AGIV ‘Aktiengesellschaft für Industrie und Verkehrswesen’. Between 1992 and 2000, Frank worked as Division Manager for DEG-Verkehrs-GmbH. In 2000 he joined Deutsche Bahn as Head of Business Development and Project Director for the re-organisation of DB Regio AG. In 2003, Frank was appointed as COO of DB Regio AG.