The continual success of Hull Trains 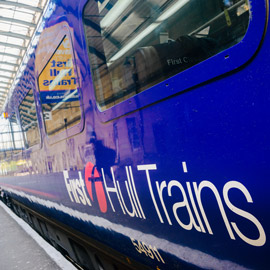 Hull Trains is consistently voted the top-performing operator in the UK for passenger service; amongst the top of the league for reliability and is recognised as one of the most innovative and enterprising long-distance train operating companies in the UK. In its first year of operation, 16 years ago, it ran three daily services and carried 80,000 passengers. Today, Hull Trains is catering for over 900,000 passengers –a number that continues to grow each month.

Hull Trains caters for over 900,000 passengers per year

The company was set up in 2000 by entrepreneurs Mike Jones and John Nelson and is now successfully led by a new leadership team. In 2003 First Group acquired an 80% stake in the business and in 2008 the company was rebranded First Hull Trains. (Left to right) Mike Jones, Will Dunnett and John Nelson

Its remarkable growth is largely thanks to the calibre of its people and the arrival of its entrepreneurial MD, Will Dunnett in 2013 – a commercially focussed businessman with a strong track record in improving the performance and fortunes of various companies within the transport industry.

Will says: “When I arrived in 2013 I was struck by how good the people within the business are. I was able to call upon the founders of the business, John Nelson and Mike Jones, to undertake and conduct a major strategic review of the way the business had been managed. The business was operating like a franchise, instead of harnessing the essence of what being an Open Access operator should be – innovative, agile, entrepreneurial and absolutely dedicated to the customer.”

This new strategic approach delivered results that were possibly unparalleled in the modern era – a new belief in the business, record-breaking passenger numbers and unprecedented customer satisfaction scores that are leading the industry.

“We’re committed to delivering greater value for customers, improving the passenger experience and delivering rail travel in the manner that people want it”

Will says: “I introduced a customer-centric plan that in some ways was built on traditional rail values. We’re committed to delivering greater value for customers, improving the passenger experience and delivering rail travel in the manner that people want it.”

There followed a £5million investment in the company’s fleet as well as bringing maintenance in-house to improve reliability. Hull Trains Cancellations and Significantly Late figures are now some of the lowest in the long-distance rail sector.

Travelling with Hull Trains became much easier thanks to the introduction of M-tickets, print-at-home tickets, journey alerts direct to mobiles, new connection tickets and the ability to purchase Oyster cards on-board. Passenger numbers grew and as the maintenance regime improved, the business was able to increase available capacity and examine opportunities for new route innovations. In 2015, Hull Trains introduced the first ever weekday direct service from Beverley to London Kings Cross. The service has been so successful that it now runs seven days a week.

The short and medium term transformation of the Hull Trains business has been achieved at the same time as ploughing ahead with plans to secure the company’s long-term future.

Will says: “We now have an unprecedented ten-year track access contract to 2029 – the longest track access agreement in Hull Trains’ history. This gives us longer-term job security and the assurance of keeping the region connected. It also enables us to purchase new hybrid trains – a massive £68m investment that First Group are supporting us in making. This will give us more sustainable, faster units with a 50% increase in total seating capacity on our services.

“We will also take advantage of the opportunities suggested within the Shaw report and CMA reports which urge greater rail competition. Anything that puts and keeps the customer at the heart of our business and continues to improve the passenger experience is something that we will continue to champion and support.”