Level crossings and the Lorries of Doom; instalment 2

In his second instalment, regular blogger Peter Van de Mark takes an in-depth look at the hazards of level crossings… 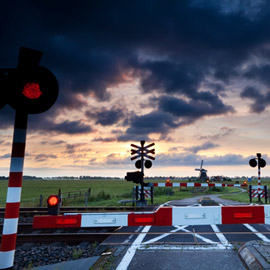 Perhaps Global Railway Review readers remember my previous article about the remarkable regularity with which collisions between heavy road transport and trains occur on level crossings. A reader from The Netherlands pointed out that, in fact, it is quite difficult to find the right emergency telephone number to call in most countries. Furthermore, even when they do manage to contact rail traffic control, structural possibilities to locate and stop approaching trains in time, are limited. The usual train describers do not give very accurate information about where trains are along plain line, certainly away from the main rail traffic corridors or in ‘black territory’, and many non-controlled automatic signals do not actually have what is called ‘aspect replacement to red’ facilities. In case used in a stress situation, such signal aspect replacement facilities may potentially trigger a category C SPAD, which should not be inflicted too regularly on train drivers. This obviously is an international view. For instance, in the UK aspect replacement to stop is often included in plain line signalling, even in cases with a key used at location. Not a very usable proposition in this case either. An official placing track circuit clips is another alternative with questionable merits.

“There should be obligatory contact between the road transport organiser and the rail traffic authorities, which surprisingly is not a legal requirement in all countries”

There are, in fact, two key issues at play. One is a contracted heavy transport currently being planned and, in order to obtain the necessary permits and papers, is being scouted for the best route from origin to destination in the weeks prior to departure. Obviously, there should be obligatory contact between the road transport organiser and the rail traffic authorities, which surprisingly is not a legal requirement in all countries. The NTSB in Washington DC, USA, in fact did get this issue included on a Federal level in the run-up to legalising heavy transport, but found that level crossing crashes occurred nevertheless and that people involved (including police escorts) afterwards still professed to be unaware of what was required. In Europe this will clearly have to be organised at Continental level, as nationally restricted activities are bound to lead to irritating discrepancies and uncertainty, especially when such a transport is crossing borders. Furthermore, once on their way the transport organisers and escorting authorities (private security or police) must have documentation in their vehicles that spells out the permitted route and contains the necessary telephone numbers to report progress and arrival at level crossings or, indeed, other possible intersections such as drawbridges across waterways and cross-town and city-centre routes. On the surface, it appears that a kind of ‘one-stop shop’ should be provided from the railways, to contact and negotiate the rail crossing occupations. Is seems odd that, internationally, this isn’t yet in place. Is that because blaming road transporters is easier? The other situation covers a spur of the moment event, or emergency, more than anything. An example is the recent fatal level crossing collision at Dalfsen in The Netherlands, where a slow tracked vehicle was crossing a single line on a user worked crossing when an Electric Multiple Unit train smashed into it at speed, killing the train driver and completely derailing away from the track. In such a case the contractor operating the vehicle should be able to contact rail traffic control from the crossing site using a mobile telephone. Experience on a number of networks has been that lineside telephones, whether at signals or at crossings, become vandalised. However, Finnish experiences with remote level crossing accidents led to the installation of signs that show the name and location of the level crossing, together with the telephone number of the local traffic controller to report accidents. This is precisely what should become an obligatory requirement internationally. Signs can also be used to remind anyone with awkward transport, or who gets stuck, to immediately call the rail traffic controller. Again, in the day and age of the mobile telephone it should not pose intractable problems, provided that the sign caters for foreign language speakers through being internationally standardised (local language and the transport lingua franca English, for instance) and placed high enough to escape the attention of an average infantile with spray-paint. Nationally, such signs exist; I have seen and photographed them in France and in the UK.

Part 2 of the argument is to provide relevant, objective-referenced training for anyone professionally involved in road freight transport. In many international accident reports involving such heavy road transport level crossing crashes, the utter and complete lack of understanding among road freight operators of just what an automatic level crossing, or indeed a completely unguarded one, might mean in terms of accident risk to their precious cargo (and the safety of employees and passengers on trains!) is actually quite stunning. Such ignorance was witnessed during the level crossing crash at Studenká in the Czech Republic not so long ago.

A further point to mention is the recurring issue of unpreparedness. It isn’t good practice to wait until you arrive at a level crossing to consider whether your vehicles and their cargo will go to ground, or clear the electric overhead wires. This is an important issue that the transport contractor should have established way before beginning the journey; preparing his trip accordingly, e.g. through negotiating assistance from the railway to ensure a safe crossing. The French transport safety authorities, BEA-TT, were especially clear on this point following the bad accident at Tossiat near Bourg-en-Bresse.

Obviously, another key incentive is making accidents such as the one described very expensive in the courts of justice when lack of preparation is evident. This helps to focus priorities as well.

Shouting from the moral high ground alone will not solve this problem. Being well-versed with the issue and conversant in four European languages, I hereby offer my assistance with any attempt to prepare international proposals (EU-wide) for improvement on this life-threatening and costly problem, aimed at urgent implementation on European level crossings. Reactions are encouraged, please!