What are the implications of satellite-guided digital rail networks?

Nigel Davies, Head of QinetiQ’s Secured Navigation group, explores the potential risks and benefits of the increasing use of satellite signals in rail networks. 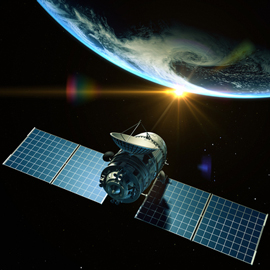 Nigel Davies, Head of QinetiQ’s Secured Navigation group, explores the potential risks and benefits of the increasing use of satellite signals in rail networks. We look set to move towards railways where satellites will help to guide everything from train timetables to repair crews.

By providing real-time location and timing information, Global Satellite Navigation Systems (GNSS) could help train operators to create timetables that adapt to squeeze more capacity out of existing lines, and trains that continuously adjust their speed in response to real-time information in order to save fuel or ensure they hit their scheduled arrival time.  And, in contrast to trackside ballasts, which provide relative positioning information, satellite navigation systems can provide a continuous stream of absolute time and position for each train and even each carriage.

On one route alone, Network Rail thinks that real-time cab signalling and traffic management systems could provide 11 extra peak train paths an hour, avoiding the need for an extra 11km of track. It will also provide greater connectivity and efficiency on other routes, allowing operators to accommodate more freight and commuter traffic on every line.

By 2019, Network Rail will be close to achieving its vision of ‘right time’ timetabling by using on-board satellite receivers to monitor and control every train in real-time, creating a responsive, seamless rail system where trains adapt to changing circumstances. It is already pioneering Plain Line Pattern Recognition (PLPR) where computers use GPS co-ordinates to automatically guide engineers to track faults spotted by thermal imaging cameras. Selective Door Operation-where individual train doors open or close based on the length of the platform and the train-will also be partly guided by GPS data of the position of each carriage. Meanwhile, Positive Train Control systems could enable on-board computers to take over from drivers if the train is going too fast or approaching an obstacle.

These advances could create safer, less congested, more efficient railways, but they come with a number of risks.

‘Connected railways’ partly dependent on GNSS data, could open train timing and location data up to manipulation by hackers who could use malware to tell a train that it’s speeding up when it is slowing down or even give a false location. GNSS receivers usually have at least one computer processor running software via an operating system that feeds data to other devices, including the Driver Advisory System or control tower. An attacker could break into another device on this ‘Internet of Things’ network and then access the GNSS receiver, changing the value of a train’s time and position. Satellite navigation systems are also vulnerable to electronic jamming and spoofing because they broadcast signals from over 20,000km up in space so the signals are very faint and difficult to distinguish from background noise by the time they reach Earth. The SENTINEL Project – a Government-backed UK investigation into GNSS signal jamming – found that the power of handheld electronic jammers is increasing and has detected incidents of GPS jammers used on UK trains. South Korea recently experienced powerful electronic jamming attacks that affected large numbers of planes and ships, demonstrating that jamming can severely disrupt satellite-guided transport systems.

It is also possible to echo the signals with a fake signal, potentially misleading the on-board computer or the control tower.

The ability of rail operators to avoid any future ‘blowback’ from rail digitisation will depend on whether they can learn lessons from the defence industry, which first pioneered satellite navigation and has been at the forefront of efforts to combat these risks.

QinetiQ is working with a group of stakeholders, including the European Space Agency and the UK Government, to develop a new generation of high performance satellite receivers that can switch seamlessly between multiple GNSS ‘constellations’, from Russia’s GLONASS to GPS, and multiple frequencies (MCMF) ensuring business continuity even in the event of a significant jamming or spoofing attack affecting one signal. The receivers will be available to civilian users, allowing them to access navigation data across a range of frequencies and GNSS, creating a civilian-access system with technology redundancy that can adapt to future online and electronic threats. The receiver offers highly secure, accurate and reliable position, velocity and timing for ‘mission-critical’ services.

Alongside this, the EU’s Galileo satellite network will launch a special ‘spoof-proof’ signal, dubbed PRS (Public Regulated Service), for government-authorised users that require a high level of robustness and continuity. When used in conjunction with the receivers, this will add yet another layer of redundancy and security to the mission critical services that use it.

These innovations will offer rail operators the chance to fully exploit the benefits of satellite navigation, making lines more productive and improving the commuter experience while mitigating the risks.