Ahead of the Autumn Statement, Balfour Beatty has called on the Government to provide the green light to a number of small to medium-sized infrastructure schemes to address congestion on the railways. 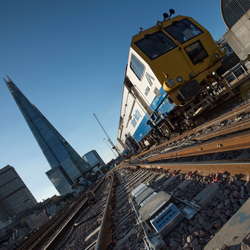 Balfour Beatty remodelled the track at London Bridge as part of the Thameslink project.

Ahead of the Autumn Statement Balfour Beatty, the international infrastructure group, has called on Government to provide the green light to a number of small to medium-sized infrastructure schemes which it believes have the potential to stimulate economic growth and provide swift economic benefits and tangible improvements for the travelling public.

The  “Small scale, big impact: infrastructure and economic regeneration” report outlines some of the smaller, quickly implementable projects which it believes would boost economic growth nationally in the short- to medium-term, while simultaneously providing a longer-term structural contribution to the economy, for example, by addressing congestion on the roads and railways.

Balfour Beatty draws on the example of rail improvements in the north of England, such as electrification of the Manchester to York railway which is long-overdue and has an obvious need, highlighting that if direct spending is concentrated on more modest projects, then bottlenecks in the economy could be tackled and the UK’s supply potential boosted. Such schemes it notes should run in parallel with existing commitments to larger scale projects such as HS2.

Schemes put forward by the group include upgrading the rail link to Felixstowe docks in Suffolk, Britain’s largest container rail terminal, making it easier to import and export goods and easing congestion through getting freight off the roads. Construction of the new station at Abbey Wood, London.

Another idea proposed focuses on investing in stations. Alongside a continued programme of modernisation and electrification of the railways, extending platform length would allow longer trains to be introduced, thereby increasing capacity, reducing overcrowding and helping to meet growing passenger demand on particular routes.

Also included in the list of “shovel-ready” schemes is the idea to join up infrastructure to regional airports, many of which, including Leeds Bradford, Birmingham, Manchester and Luton, are growing.  Investing in better rail links could encourage people to use their local airport and ease the pressure on Heathrow and Gatwick.

Leo Quinn, Balfour Beatty Group Chief Executive, commented: “Whilst major infrastructure investment will be vital to the strength of the UK over the mid-term, we believe there is also a way for the government’s industrial strategy to drive rapid economic stimulus, with considerable geographic precision.

“As of today a number of road, rail, public realm, flood defence and construction projects exist which meet the Chancellor’s tests, in many cases have been approved, but are stalled by lack of funding. Taking advantage of current low borrowing costs to select and implement those with potential to bring maximum impact on a localised basis would quickly disperse uncertainty and set the country on the path to an economic growth that works for everyone.”

Calls for a policy response to the skills shortage

The group calls for a solid project pipeline and an early and integrated policy response to the skills shortage.  In 2018 there will be a hiatus of more modest sized rail projects due to the regulatory timetable and there is a risk that gaps between projects will result in workers dropping out of the industry, at a time when it should be building rail skills and capability.

Peter Kirk, a Director for Balfour Beatty’s Rail business, said: “We believe it would send a strong signal if the green light were given to the myriad of transport projects which are currently awaiting funding. Such ‘shovel ready’ schemes will provide the rail industry with the pipeline and certainty to invest in training future experts who will be needed to deliver larger scale projects such as HS2.”