For Global Railway Review, Christine Kraft, Project Manager of ETCS at DB Kommunikationstechnik, talks us through the GSM-R system and the future of telecommunication and digitalisation in the rail sector. 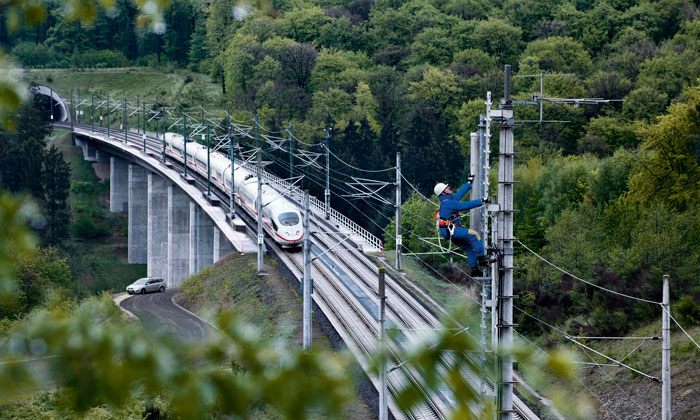 The GSM-R system is based on GSM and EIRENE (European Integrated Radio Enhanced Network) – MORANE specifications (Mobile Radio for Railways Networks). The standard for GSM-R is the result of over 10 years of collaboration between EU railway companies and is maintained by the UIC (International Union of Railways). As the international wireless communications standard for railway communication and applications, GSM-R is our common communication platform and for use as a Train Control System. One of three of the first pilot lines of the MORANE project was implemented between Stuttgart and Mannheim in Germany by DB AG. The three systems were aimed at testing different operational aspects, such as testing mobile terminal equipment with regard to aspects of topology or with regard to high-speed lines that handle trains travelling at 300km/h. However, the first implementation started in 2004.

In terms of ETCS, it has also been important to ensure the quality and high availability of radio connections for GSMR by 99.992% per base station. They must also meet the standards of ‘Advanced Speech Call Items (ASCI) features’. Furthermore, the common basis of the frequency was important, in that the member states accepted the recommendation from CEPT to add 4Mhz to the overall band and to use it only for railway use.

The architecture of GSM-R is divided into the Base Station Subsystem (BSS), Network Switching Sub-system (NSS) and Operational Support System (OSS).

The user can be reached by means of functional numbering and location-dependent addressing (LDA). The Mobile Train Radio System (MTRS) supports both voice and data transmission. In the case of train radio, this is an application which is operational and safety-assertive. The characteristics of the GSM Railway features incorporate four components. Firstly it incorporates Advanced Speech Call Items (eMLPP – Enhanced Multilevel Precedence and Preemption Service) and in the GSM-R mobile network, eMLPP ensures that priority connections exist for emergency use and for the use of certain users. The second component is Functional Addressing, which specifically identifies the relevant function and not the terminal. The third component is position-dependent addressing. This allows the routing of calls from the train to the responsible dispatcher using also a short-code number. The railway emergency call makes up the fourth component and relies on a very high connection structure.

DB in Germany has already implemented GSM-R across 28,000km of railway lines, and has introduced a migration to the digital system since 2002. However, the DB service of GSM-R is also offered as a safe emergency radio communication system to organisations such as the police.

Overall, DB Kommunikationstechnik GmbH (DB KT) belongs to the communication technology sector. It offers a GSM-R- Full-Service, which includes services such as planning, supervising construction, initial operations of the GSM-R-system, monitoring and evaluation, radio measurements, transmission technology and transmission routes. Furthermore, the main business of DB KT relies on the provision of services such as maintenance, including corrective maintenance, inspections and fault-clearing services. At the ETCS (European Train Control System) companies can also request for DB KT services to conduct interoperability tests at ETCS or to conduct ‘Quality of Service Parameters’ of GSM-R at ETCS.

Over the last few years, the railway sector has undergone an evolution, involving an industry-wide shift to digitalisation. The progression of digitalisation and safety inspire the UIC and others working and steering groups to develop a GSMR successor. One main goal will be to delete unused functions of GSMR.

At the same time, the satellite technology has been applied to railway traffic management for the first time in Europe. The aim is that there should be an ERTMS signalling system through train localisation based on satellite technology. Also Shift2Rail has published the information that the 3InSat consortium has also tested an IP-based multi-bearer radio telecommunication sub-system as an alternative to the rail industry’s GSM-R network. The Italian railway infrastructure manager, RFI, and the German company, DB AG, a department of DB Netz, are reference users and partners in the project.

In conclusion, it seems that the potential market for satellite-based train control systems is quite large, and it is now considered that GSMR will be obsolete by 2025. The industry-wide shift to digitalisation will provide new developments in the telecommunication and security sectors. It will enhance the business opportunities of companies such as DB KT. As a consequence, DB KT is intending to implement GSM-R or its upcoming successors Europe-wide in the future.

By  Christine Kraft, Project Manager of ETCS at DB Kommunikationstechnik