Infrabel has recently launched a new campaign on road safety at level crossings which includes a crash test between a train and a car – a world-first. This awareness-raising campaign is in line with the Belgian rail infrastructure manager’s approach to safety. For Global Railway Review, Spokesperson Frédéric Petit talks about this campaign, the measures and the communication strategy on level crossings. 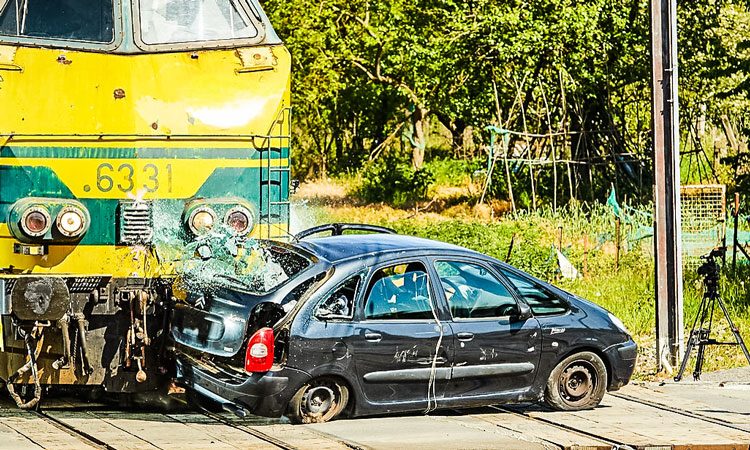 Non-compliance with road traffic regulations is a social problem

The Belgian railway network is one of the busiest networks in Europe and currently has 1,737 level crossings. Since Infrabel was founded in 2005, a total of 335 level crossings have been eliminated. Where the level crossing cannot be replaced by a good alternative mobility solution (i.e. a bridge, parallel road or cycle path), Infrabel is investing in the upgrading, renewal and maintenance thereof.

In addition to infrastructure measures1, Infrabel focuses on awareness-raising campaigns such as safety lessons in schools (by developing new tools for pupils such as a track safety package) and safety campaigns, to which I will detail in a moment. Additionally, the federal and local police and Securail (the SNCB security service) carry out numerous checks on level crossings.

Statistics clearly show that it is necessary we continue to insist on these safety messages. In 2017, 51 accidents occurred at level crossings in Belgium in which nine people were killed; an increase compared to 2016 (45 accidents and four deaths). For the purpose of comparison, in the period from 2005 to 2017, there were on average 52 accidents and 11 deaths each year.

An accident occurs at a level crossing in Belgium approximately every week and a death occurs almost every month. Non-compliance with road traffic regulations is the main cause of accidents at level crossings and is a social problem. Infrabel, Vias institute, the fire brigade, the federal railway police and Securail have therefore joined forces to set up a new safety campaign. 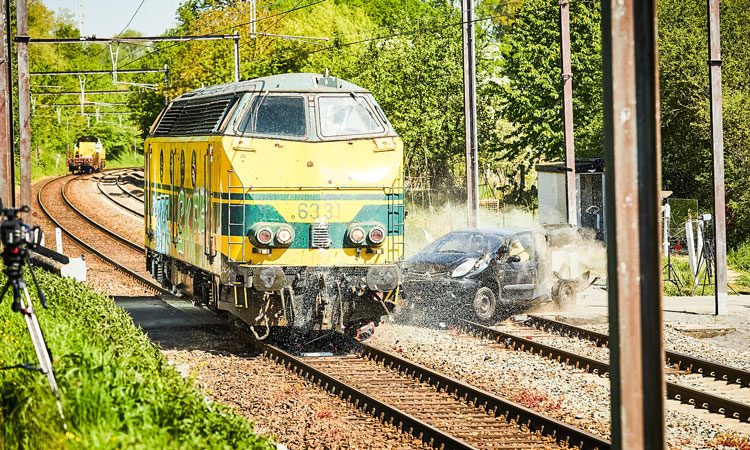 The backdrop to this was a level crossing in Wallonia on a railway line that had been taken out of service. An area of two kilometres was closed-off and guarded by police and railway staff to ensure that the crash test took place as safely as possible. An empty locomotive weighing 85 tonnes was pushed by a manned locomotive. Five-hundred metres away from the level crossing, the empty locomotive was unhooked, after which it collided with a stationary car (one tonne) at the level crossing at a speed of 75km/h.

As planned, the locomotive hit the rear of the car, causing it to spin and then come to a standstill next to the track, severely damaged. Bits of wreckage from the car were flung around and scattered many metres around the car and next to the track. The locomotive itself stopped 150m after the collision. During the crash test, the driver (father) and the two occupants (toddlers) were killed…but fortunately they were dummies (mannequin dolls), this time.

Prior to the actual crash test, dozens of preliminary safety tests were carried out. The crash test and campaign was devised entirely by Infrabel and further developed in close cooperation with the various partners.

Each partner has tested, researched and used particular security aspects based on its own specialist field, which are also used in their own communications. This makes this transversal campaign unique. Moreover, it is also the first time that a crash test was organised for both scientific purposes and for improvements to road safety: A world-first.

For many years, Infrabel and other authorities have been pointing out the risks of dangerous and careless behaviour at level crossings. With this new campaign, each of the partners wants to make everyone aware once again of the need to respect safety and road traffic regulations anywhere and anytime.

A video and images of the crash test (filmed by three drones and 20 cameras around or in the car) provide the basis for the new campaign, which is run by the partners via their own channels, including social media. The campaign will also be used in a variety of awareness-raising and safety promotion activities (training courses, lessons in schools, police and traffic days, etc.).

Sensors used by Vias institute have established that the impact on the car is enormous, especially during the first few seconds of the collision between the train and the car. The car is very quickly thrown in all directions and the human body is subjected to forces many times its own body weight.

In less than a quarter of a second, a peak of 60G is measured by the sensors mounted on the car. Part of that impact is absorbed by the vehicle. Nevertheless, a large part of the ‘acceleration’ is transmitted to the occupants’ bodies, especially to the person closest to the place of impact.

This means that the people in the car are subjected to pressures approximately 60 times their own body weight. An individual weighing 70kg thus sustains an impact of more than 4,200kg. For the purposes of comparison, a trained F16 pilot can take 9G. This is six to seven times less than the impact caused by a collision with a train.

The vehicle does not come to a halt until three to four seconds after the collision. The chance that someone will come out of such a collision alive is therefore very small, even virtually non-existent. In reality, trains used during this test also often run faster than the 75km/h. 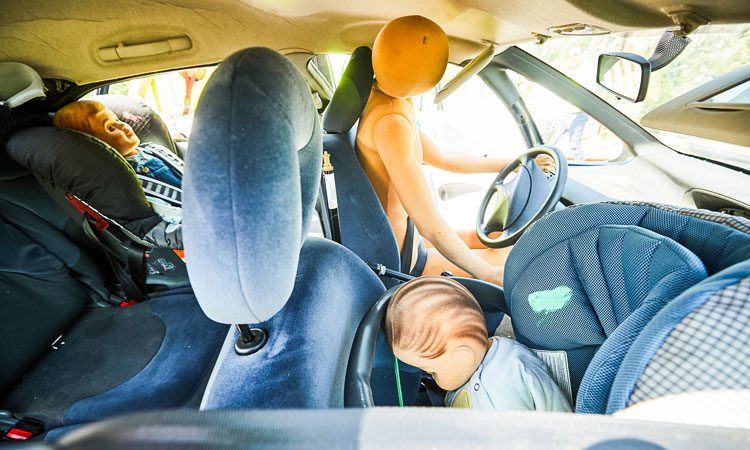 The other partners involved also used the crash test to practise certain safety aspects in the field.

The local fire brigade, for example, used specialist equipment to proceed to the necessary interventions on and around the railway infrastructure. After the crash test, they also carried out the evacuation of the dummies from the car.

The federal railway police used the crash test to train young police officers during accidents. They learn to take appropriate action, record measurements required during an investigation, draw sketches and compile a report.

Securail, SNCB’s security service, was responsible for monitoring level crossings on the train route and for securing the site itself. In their day-to-day work, they regularly have to deal with unsafe behaviour from people who want to cross the tracks while the level crossing is closed. 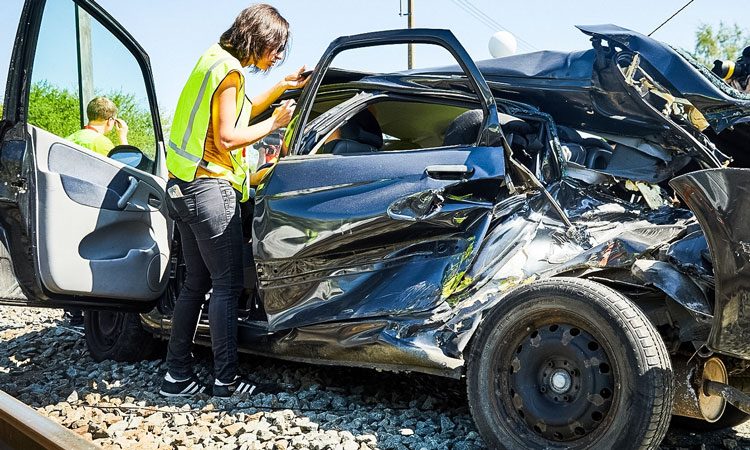 The crash test enabled the fire brigade, police and other parties involved to learn how to take appropriate action, take measurements required during an investigation,
draw sketches and write a report

Raising safety awareness by and for everyone

The number of accidents at level crossings remains stable thanks to all the safety efforts of the different bodies involved. What’s more, around 70 per cent of the accidents in Belgium occur with local residents who live close to the level crossing. The logical fallacy that tells us “we know the local situation at this level crossing and nothing can happen to us” plays an important role in this respect and produces a false sense of safety.

This is just one of the key elements demonstrating the importance of awareness raising and is therefore the reason why Infrabel continues to do all it can to raise the general public’s awareness, of both young and old. We deliberately alternate between soft and harder campaigns in our communications strategy. But the campaign scenario surrounding the crash test is particularly realistic and comes very close to events that happen on a daily basis…fortunately they were dummies this time.

In order to reduce the number of accidents, however, road users will have to change their attitude and simply respect the road traffic regulations – a human life is worth so much more than a single paltry minute saved. A campaign that saves just one human life is therefore a successful campaign and is the reason why Infrabel will carry on raising awareness.

Frédéric Petit has been Spokesman at Infrabel since 2005. Prior to this he was Project Leader for Communications at SNCB and Marketing and Communications Advisor at Fortis. Frédéric holds a Licentiate degree in Communication Sciences from KULeuven and a Master’s in Journalism from VLEKHO Brussel.