Quality control measurement of a MSS after 30 years of operation

An investigation into the effectiveness of one of the first mass-spring systems (MSS) in Switzerland is currently ongoing. After 30 years of operation, the vibration-reducing lightweight MSS is still performing without faults, despite the elastic bearing of the slab now being partially submerged in water. Vibration engineering experts Adrian Egger and Markus Heim provide further insight. 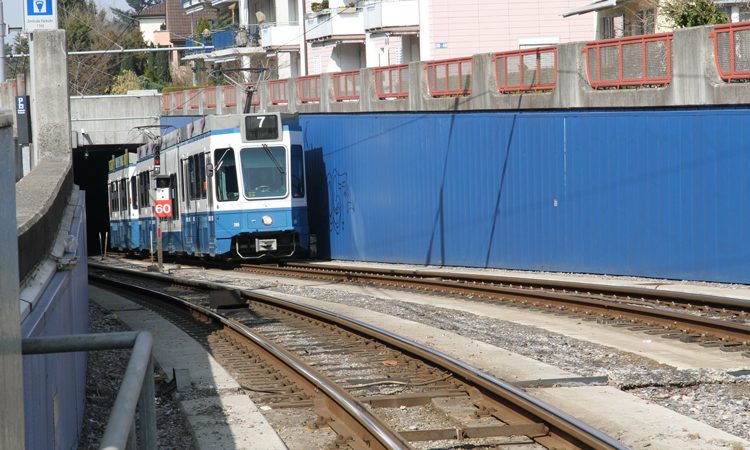 The foundations of sensitive residential buildings lie directly on top of the approximately 2.2km-long tram tunnel in Zurich, which was constructed between Milchbuck and Schwamendingen (lines 7 and 9) 30 years ago.

To ensure that residents enjoy a high quality of life when the tramway line is operating, Verkehrsbetriebe Zürich (VBZ) opted for a ballastless track system with an elastically mounted track slab to protect the residents from vibrations.

At that time the ‘Viennese system’ served as the template for the superstructure in the Schwamendingen tunnel – the difference being that polyurethane mats made from Sylomer® should be used as an elastic bearing instead of fibreglass mats.

Commissioned in February 1985 the track superstructure consists of two longitudinal concrete slabs, each measuring 88cm-wide and separated by a 44cm-wide longitudinal groove.

The longitudinal slabs are mounted on full-surface elastic Sylomer mats (Sylomer LR44) and synthetic sleepers were used as cross sleepers, which were mounted on sleeper boots.

Historic and current investigations into the effectiveness of the vibration measures

In August 1985, shortly after the commissioning of the track, investigations into the effectiveness of the vibration measures were carried out on the track as well as in the adjacent buildings.

After 30 years of operation, new vibration measurements were enforced in March 2015.

The repetition of the measurements allows us to comment on the long-term effectiveness of the MSS vibration measures, which is significantly influenced by the elastic mats made from Sylomer.

The vertical vibration velocities were measured at nine measuring points in the tunnel during a normal flow of traffic, both in the area equipped with the MSS and in an adjacent section of track not equipped with a vibration-reducing measure.

Measurements were taken at the same locations on the tunnel floor next to the tunnel wall in the MSS section as were used for the 1985 survey.

Measurements were also taken at two additional points located both 12m to the left and right of the historic measuring point, to obtain greater statistical evidence for the vibrational reduction properties of the MSS.

The track section in the tunnel without MSS was also monitored in a cross-section.

To verify the continued effectiveness of the protection measure, the vibrations generated by the trams were recorded – in all three spatial directions – in the basements of two residential buildings located in the immediate vicinity of the tunnel. Once again, the measurement points were identical to those used in 1985. 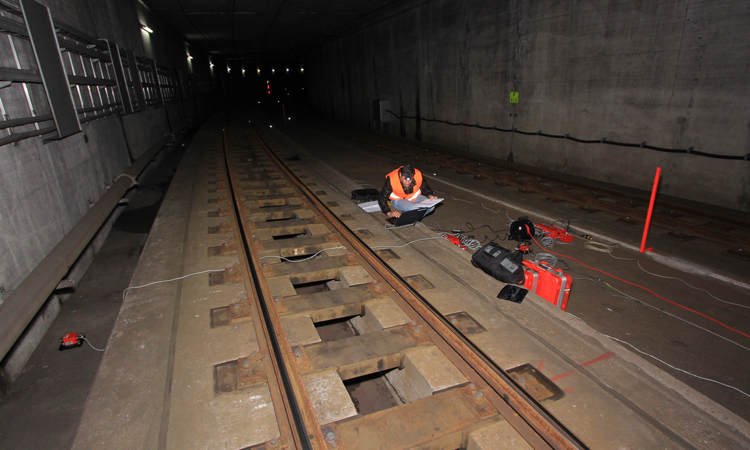 Measuring equipment in the measurement section with mass-spring system (MSS)

The gradients of the track drop slightly in both directions, forming a depression in the middle of the tunnel.

During an on-site inspection water was discovered in the longitudinal groove of the lower section track (track 800). The water level was up to 20cm-deep along most of the track area with MSS.

The water thus stands approximately 15cm above the level of the elastic bearing. There was no effective draining available for the section of track passing through the depression.

This presented the opportunity to investigate the influence of standing water on the insulation performance of the MSS in the very same section that was being examined with regard to the long-term effectiveness of the vibration insulation measure (‘MSS after 30 years of operation’ project).

To demonstrate the effectiveness of the MSS, immissions measurements were taken in the basements.

In 1985 the maximum vibration velocities of the passing trams recorded at the various measuring points inside the buildings and in the tunnel were used to assess the vibrations. Back then the values had to be determined manually using analogue recordings on paper strips, whereas today this is all performed digitally thanks to advanced measuring technology.

To obtain a meaningful comparison of the measurement data from 1985 and 2015, only measurements for the ‘Tram 2000’ type were considered in the assessment, as measurements had been recorded for these trams in 1985.

The maximum vibration velocities recorded for all directional components in the basements of the residential buildings and their resultants lie well below the sensitivity limit of 0.1 mm/s to 0.2 mm/s (strictly speaking this is also dependent upon the frequency and individual human perception).

As the results show, the MSS is still completely effective after 30 years of operation. All in all, the vibration velocities recorded were extremely low. It can be seen that the measured immission values have not increased at any location or in any spatial direction; the values today are even significantly lower. This improvement is most likely, however, the result of the more accurate measuring and evaluation technology in use today.

Overall, this is resounding proof that the vibration-reducing effect at the immission location is still in full force – the MSS tested in Schwamendingen, Zurich, has not lost any of its performance even after 30 years of operation. 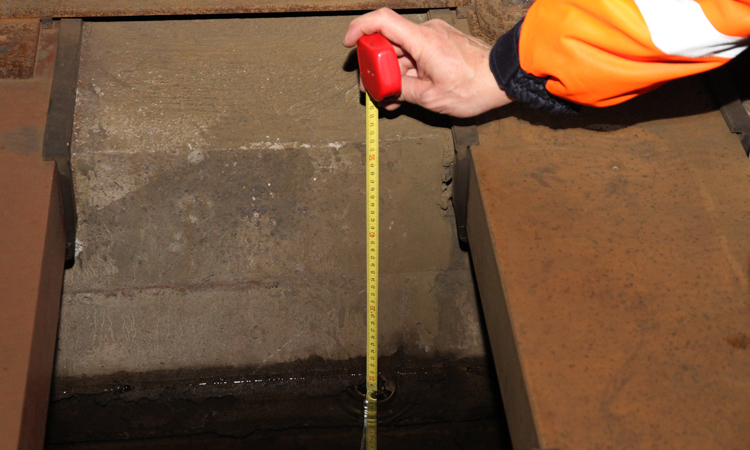 To demonstrate the current effectiveness of the MSS, the insertion loss was determined based on the difference between the one-third octave spectra of both superstructures ‘with MSS’ and ‘without MSS’. The insertion loss is a mass that describes the effect of an elastic element – in this case the elastic bearing of slabs on Sylomer – installed in a given situation involving a vehicle, superstructure and substructure.

The investigation shows that the bearing of the Sylomer material in water has no negative effect on the vibration reduction of the system.

The scatter for the insertion loss is the result of varying parameters, such as the recording of different tram types, rolling stock, speeds and various other factors that are difficult to record.

The slight difference between the insertion loss curves for both tracks can be attributed to influencing factors such as differing rail roughness, welded joints, etc.

The insertion loss determined for the MSS with Sylomer in the tram tunnel in Schwamendingen, Zurich, shows an excellent insulation performance. The 30-year old MSS also conforms to the latest requirements and technological standards. The vibration insulation measure is in perfect working order.

Dr. Adrian Egger studied geophysics at ETH Zurich. For the past 20 years he has been a project leader in the field of vibration protection at various engineering consultancies in Zurich. His specialities are measuring and forecasting technology. Since 2015 Adrian has been working at Trombik Ingenieure AG in Zurich as a Company Executive and he is responsible for the Vibrations and Structure-Borne Sound Division.

Markus Heim studied technical physics at the Vienna University of Technology and has been a Member of the R&D Department at Getzner Werkstoffe GmbH for 25 years. His area of expertise is in vibration engineering, in particular vibration measuring technology. He is also heavily involved in the development and testing of new elastomer materials, components and systems and takes part in research projects. Markus’ international experience in effectiveness studies and long-term references for railway projects completes his portfolio.